It’s hard not to like Jake Moss, the 22-year-old rising to be one of the fan favourites in Australian Supercross and picking up a popular first Open class victory at Sydney’s round of Super X last Saturday night.

This year’s Super X season has seen Jake join Matt for the full season for the first time in three years without injury, and together they achieved the ultimate family feat at Parramatta by winning the Open and Lites classes respectively.

With Jake building momentum and currently sitting a comfortable third in the Open standings, MotoOnline.com.au gave him a call on Monday afternoon to see if it’s all sunk in yet. 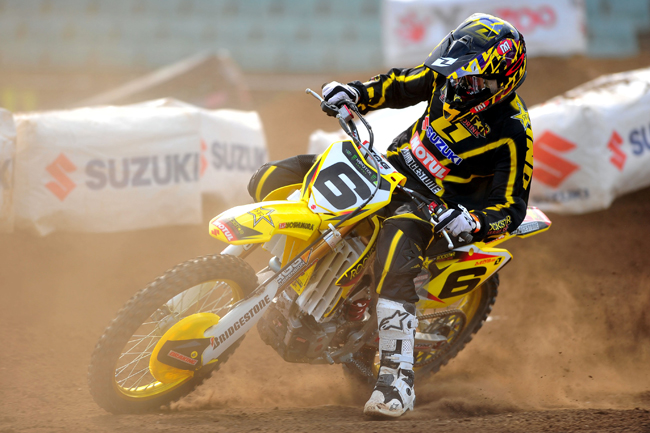 Jake, first of all congratulations on your result at Sydney. It must be an unbelievable feeling to get your first Super X win for Suzuki in the Open class?

Yeah, it was awesome. It was just so good to do it when my whole family was there and a lot of fans from Sydney, as well as people from Sussex.

It’s such a good feeling to win that first one and also to have Matt win as well in the Lites.

It was definitely a big night for the Moss family and also Suzuki, a rare moment in sport where everything comes together.

Yeah, it was good. Jay [Foreman, Rockstar Motul Suzuki team manager] was so happy and my dad was pumped. I actually think Matt was happier that I won than he was for himself to win, I guess because he’s been winning races all season.

But yeah, it was good – something that we’ve been working for all along.

You told me on Saturday night that you’ve been sticking to your own program down at the farm, chipping away at it all. It seems like that program is really starting to work for you?

It’s been good, just changing things around and trying to have fun. I’ve actually been having a couple of rest days and stuff during the week, making sure I’m 100 percent for the weekends, and I think that seems like the way to go.

This year is actually your first full season on the 450 in Supercross (Jake was forced out through injury in the opening round last year), and it seems as though you’re constantly improving and enjoying it so far?

Yeah, I did a couple of nationals this year on the Suzuki and I like the bike a lot. Rockstar Motul Suzuki is a really professional team, they build the bike exactly how I like it, so everything is starting to come good now. 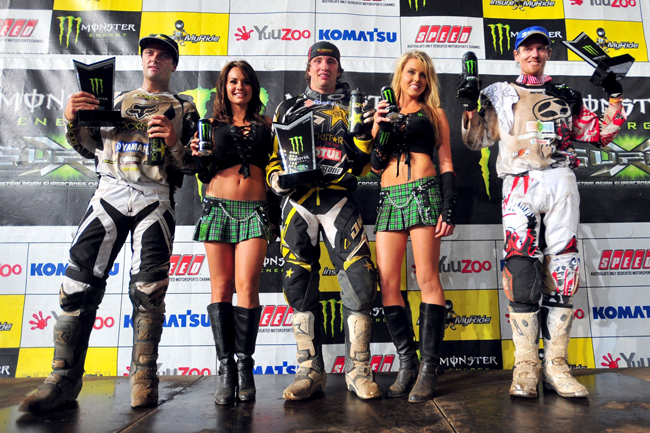 Moss topped the Open podium ahead of Billy Mackenzie and Jay Marmont on Saturday night. Image: Sport The Library.

You’re really building momentum in Super X as the season winds down, currently sitting third with one round remaining after three podiums in a row. Obviously the goal from here is to keep it up into 2011?

For sure, I just want to stay injury-free for a year. That would be awesome. I haven’t gotten this far so far in Super X without any big crashes, and I think that’s just from not being tired on the bike – I’ve got a base to work from now.

My preparations have been good and I’m feeling good all the time.

Just finally, speaking of next year. I know you’re close to a deal so can you give us any indication whether we’ll see Jake Moss in Australia fulltime next year, or will you be heading back to the U.S. again for a fourth season?

Ah, I find out next week, but at the moment it looks like I’ll be staying here in Australia.

Okay, well cool man. Congratulations again, it was good to see you on top of the box that’s for sure.