MotoOnline.com.au goes behind the scenes in our latest edition of the Racing Insider column. 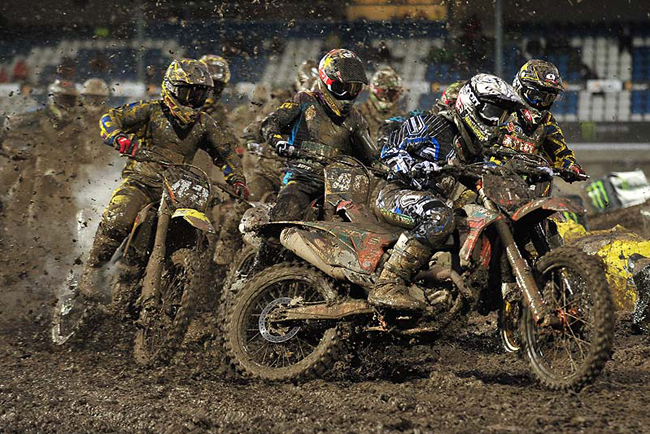 The mud in Dunedin left teams with a busy clean-up and week ahead in the lead-up to Parramatta. Image: Sport The Library.

Australian Supercross
It’s been a quiet week on the racing front this week, with Australian Super X teams flat out in getting their equipment back on Aussie soil and in shape for this weekend’s Sydney round at Parramatta Stadium.

You have to feel for the teams since the New Zealand-Australia quarantine laws are so strict, and not one spec of dirt was allowed on any of the equipment despite the massive mud-fest that Dunedin was.

Anyhow, we’re back in Australia now and we have just two rounds of Super X left to run at Sydney this weekend and then the finale in Brisbane one week later.

American Josh Hansen’s title prospects are under control, the American doing a superb job at fending off the attempts of Aussies Jay Marmont and Jake Moss, so it’ll be interesting to see how he rounds out the year – something tells me there’s no way he’ll put his Monster Energy Pro Circuit Kawasaki on cruise control to the title.

Hansen is joined by Californian brothers Mike and Jeff Alessi to round out the season, but the announcement of Ivan Tedesco for the final two rounds seems to have fallen off the radar.

But apart from those certain disappointments, Super X has definitely boosted the sport in ways that seemed unthinkable a few short years ago. Now we just have to keep out fingers crossed that the series will continue in years to come.

This weekend will see Billy Mackenzie make his Super X debut for Kawasaki, while Adam Monea will switch from the Opens to the Lites in a two-race guest deal with Serco Yamaha. That should be good to see, always nice to see guys get shots at factory rides.

On Monday this week Jay Marmont, Ryan Marmont, Mike Alessi and PJ Larsen went to Parramatta Westfields to do a signing, while tomorrow afternoon we’ll see the top guys of Super X welcomed by the Parramatta Eels National Rugby League team at the stadium.

Hopefully this weekend attracts the kind of crowds that the sport rightfully deserves.

Once again MotoOnline.com.au will be there with updates as they happen flowing on our Twitter page @MotoOnline, as well as featuring images, films and breaking news stories on the site during Saturday afternoon’s activities.

American Supercross
It’s not long until the AMA Supercross season kicks off at Anaheim 1 and I for one am getting more excited by the minute knowing that we’re set for a big season to come.

As we reach December next week, things tend to go pretty quiet when teams put their final preparations into place, before the big show begins at the start of the new year.

Australia’s Chad Reed seems like he’s in a good mood and things are on track with his TwoTwo Motorsports effort, and interestingly he just completed his first day with new mechanic Lars Lindstrom.

Never heard of Lindstrom? He’s the guy who you have probably seen wrenching on Jeremy McGrath’s bike for many years now, and I think he’ll be the perfect fit for the TwoTwo. As a side note, the guy absolutely rips on a dirt bike too!

James Stewart has been very quiet over at L&M Yamaha as he now works with Johnny O’Mara on his fitness, while Ryan Villopoto now has Aldon Baker in his corner – the man who transformed Ricky Carmichael earlier this century.

As for defending champion Ryan Dungey, well he is said to be looking solid with the number one plate over at Rockstar Makita Suzuki, and you can bet his confidence is high heading into 2011.

As for the dark horses heading into A1, you’d have to say South Aussie Brett Metcalfe, Trey Canard, Jake Weimer and even KTM’s new signing Andrew Short may surprise with podium potential.

Sad news for Aussie fans came this week that Michael Byrne suffered a wrist injury at the Bercy Supercross in Paris last weekend, so his form upon return to Suzuki with BTO Sports has been jeapordised after undergoing surgery. We’re not certain if he’ll be at A1.

World Superbike
We had confirmation that Bryan Staring has signed for Pedercini Kawasaki over the weekend and were only just able to announce it this morning, which should mark a great opportunity for him to learn the tracks in Superstock for 2011.

Moving to Europe isn’t an easy thing to do, however the family environment that is Pedercini Kawasaki should be ideal for Staring and his bike should be top quality since the initial media reports are that the new ZX-10R is up there with the best.

Pedercini has been chasing the signature of Aussie Andrew Pitt recently but announced that Roberto Rolfo would be riding the team’s Superbike this morning. What that means for Pitt we don’t know, but fingers crossed he’ll be on a second ZX-10R with the team in WSBK. 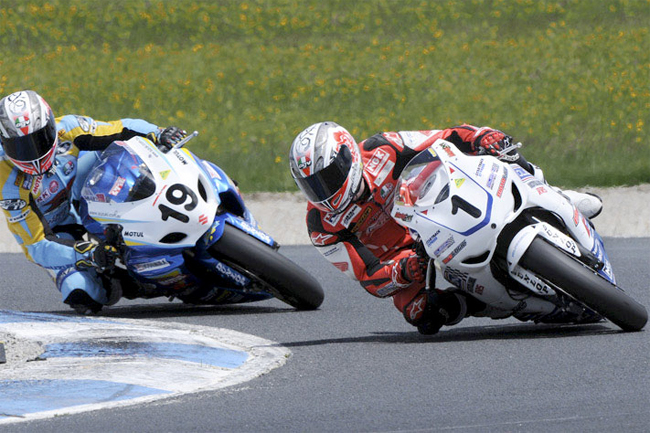 Just like 2009, we will see Glenn Allerton (1) on a Honda run by Paul Free lapping Phillip Island. Major competition will be the Team Suzuki effort of Shawn Giles (19) and Josh Waters in The 6 Hour.

Australian Superbike
Dare I say it but the upcoming Bel-Ray 6 Hour to be held at Phillip Island on 5 December may just be the biggest motorcycle racing event of the season on a domestic level here in Australia.

Add in yesterday’s revelation that Honda Australia is fielding an official factory team managed by Motologic Racing’s Paul Free – the bike ridden by Jamie Stauffer and Glenn Allerton – and a podium placing is going to be very well deserved this year.

Now, nothing has officially been released regarding the Honda entry apart from the fact that they are on the entry list using number 01 (Demolition Plus GAS Honda Racing has number one).

Everybody has been speculating the future of Motologic in recent weeks, but the fact that Free and Stauffer are involved in Honda’s official factory effort at The 6 Hour pretty much confirms the team his Honda-bound for 2011 – even if there is no official Motologic branding on the entry list that we can see.

Having Allerton on the 6 Hour team is an interesting factor because many had thought he would sign for Yamaha full time for next year after recently joining them for the FX Superbike series, however now we aren’t so sure.

I would say the second position at Motologic will either go toward Allerton or Maxwell, but if Maxwell doesn’t sign we are still hearing rumours that he’ll be on a PTR Suzuki of some kind. Watch this space…

Just adding a little more on The 6 Hour, the Supersport class is heating up with Suzuki running Troy Herfoss and Brodie Waters, plus Triumph running Christan Casella and Jed Metcher as its lead riders.

In Superbike, two international Aussies teaming up on a Suzuki are Trent Gibson and Dave Johnson, so they’ll be good to keep an eye on.

Another interesting entry in the Production class teams is Supermoto star Angus Reekie on a KTM RC8R for Team Cessnock.

Also, if anybody has heard from Kawasaki, let me know. I’d love to know what they are doing next year. The reality is, with its new ZX-10R, Kawasaki could really surprise in ASBK next year if it finds a ‘home’ – aka a team.

MotoGP
Just a quick update on MotoGP, it looks as though young British rider Scott Redding could get a chance on a 2012-spec MotoGP bike this week at Jerez in Spain.

Redding is a top Moto2 talent and recently signed a two-year deal with Marc VDS Racing to ride a Suter in Moto2, however he’ll get his first taste of MotoGP when he rides a Suter with a BMW S 1000 RR engine on Thursday or Friday.

Finally in Moto2 news, Ant West looks like he’s secured the second seat at MZ Racing for a second season in GP racing with the German-based operation.

That’s all for this week, thank you guys as usual for stopping by and checking out the Insider for the 47th time this year!