MotoOnline.com.au takes a look at the latest happenings in the world of racing from behind the scenes. MOTOGP
Testing for season 2011 officially commenced yesterday in Valencia, the day delayed by rain to begin with as the world awaited Valentino Rossi’s debut on the Ducati Desmosedici GP11.

The rain delay only made it all the more exciting as Dorna hosted a live feed on its website – also televised live in Italy! – and eventually it was Rossi who was the first of all to complete a run of 12 flying laps in succession.

Some have suggested that Rossi was pressured by Dorna to get out on track first as the live television cameras were only set to roll in the morning, however in the end it was a nice touch to see him out on track circulating alone to begin his career in ‘red’.

The Doctor’s not actually in the Marlboro red just yet, but check out this link to see a free video of Rossi in action aboard the Ducati thanks to MotoGP.com, the official series website.

Since we are an Australian site we really should place much of the focus on Casey Stoner’s return to Honda, this time joining the factory Repsol Honda squad in a three man effort consisting of Stoner, Dani Pedrosa and Andrea Dovizioso.

Stoner was one of the latest guys to hit the track and he was immediately on pace, jumping to the top of the charts and putting in a great effort for his first turn on the 800cc RC212V.

Something tells me if Casey gets off on the right foot with HRC he’ll be very hard to beat, and it seems many industry insiders share the same opinion – Casey Stoner could be world champion in 2011.

The Aussie theme on his Honda was a nice touch considering he can’t run Repsol colours or Honda branding, and I must say that he’s extremely patriotic when it comes to representing Australia.

Stoner ended up second best overall behind a blazingly quick Jorge Lorenzo as he put Yamaha’s 2011 model through its paces, and Rossi replacement Ben Spies also showed form in his first appearance as a factory rider with Yamaha to take third.

Rossi was 10th, easing into his role with Ducati, but he and teammate Nicky Hayden reverted to the screamer engine at around 3.00pm rather than shooting for outright lap times.

Other riders to debut on new bikes were Randy de Puniet and Loris Capirossi over at Pramac Ducati, Moto2 champ Toni Elias at LCR Honda, Hiroshi Aoyama at Gresini, plus rookies Cal Crutchlow and Karel Abraham.

Crutchlow was particularly impressive despite a crash, lapping faster than Elias as he returns to the premier class, giving Superbike riders yet another feather in the cap ahead of the Moto2 brigade.

Yesterday’s times will mean little when the riders head out on track again today, so be sure to check back to MotoOnline.com.au for the latest as it happens from Valencia. 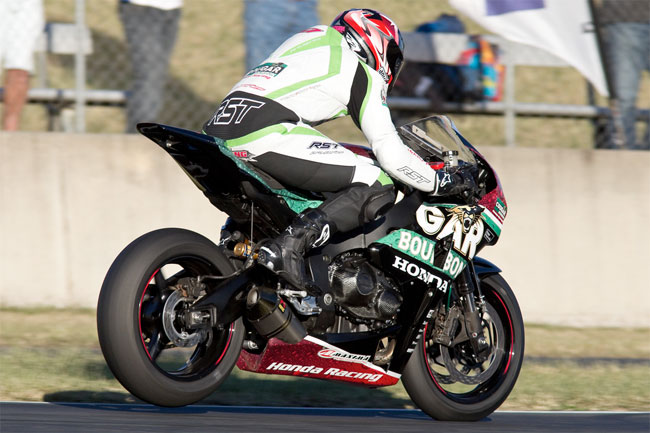 AUSTRALIAN SUPERBIKE
Tasmania’s final round of the Australian Superbike Championship takes place this weekend, where Cougar Bourbon Honda Racing’s Bryan Staring enters the round with an 18.5-point lead in the standings.

Many have counted Staring as the champion already, but there are still 50 points up for grabs and anything can happen from this point as Wayne Maxwell gives chase for Demolition Plus GAS Honda Racing.

In Supersport Troy Herfoss is a touch more comfortable as he enters with a 31-point lead for Suzuki, while Triumph’s Christan Casella sits second ahead of Suzuki privateer Brodie Waters.

One factor that could come into play is the weather, with rain expected at least during some points over the course of the weekend, and that will make the titles all the more uncertain if it’s raining come race day.

We’re yet to hear too much regarding who is going where next year, and to be honest, it’s a shame that Australian teams are so secretive in their negotiations.

Yes, it’s always good to keep things quiet before all is signed and sealed, but confirming who they’re interested in should be acceptable and that’s vastly what happens all around the world.

How else did we know so early that Rossi had an offer from Ducati, or that Stoner was going to Honda, and so on. Speculation creates interest, and as far as the Australian road racing goes right now, there clearly is no interest as to who is going where for 2011.

Now, you could argue it’s up to me or other journalists to find the facts, but when there are no hints from any angle, we aren’t going to bring things up out of thin air. Most speculation is informed speculation, and nine times out of 10, it’s healthy for the sport.

One person who we can speculate about since it came direct from the European team is that Bryan Staring has a firm offer on the table from Pedercini Kawasaki to ride the Superstock 1000 FIM Cup next season aboard the all-new ZX-10R.

With Michele Pirro confirmed for Gresini Honda in Moto2, Staring now becomes the number one option for Pedercini and Kawasaki Europe, and I think it’s a good option considering the resources Kawasaki is pouring into the WSBK paddock at the moment.

We’ll have to wait and see what happens, but it is refreshing to get a clear indication as to what one of our main ASBK players could potentially be doing next year.

We’ll do our best to dig up more dirt at Symmons Plains this weekend.

Before we wrap up on the ASBK side of things, expect the calendar to be released once approved by MA – it could be this week, or in two weeks. We’re not sure. Either way, we’re hearing that Queensland Raceway and Phillip Island are again featured prominently on the calendar. You can read our news story by clicking here, however fingers cross Harley can pull through this and stay strong in what is a devastating thing to see happen to anybody in the sport – or life in general for that matter.

We understand that Harley underwent surgery this morning in order for doctors to understand the full extent of his injuries, and we certainly wish him, his family and team all the best during this period.

Unfortunately for Coastal KTM’s Luke Bond, he too suffered a scary incident this morning that saw him helicoptered out of the practice track with what’s believed to be a broken back. There’s no word yet of spinal cord injury, however it’s another very sad story for a young kid who’s been trying hard all year long.

The Super X series will continue under a cloud in New Zealand this weekend after Quinlan’s incident, and I would say that if Jay Marmont wants to challenge Josh Hansen for this title in 2010, right now is the time to make it happen.

With the likes of Chad Reed, Justin Brayton and Kevin Windham returning to the U.S, the focus will be on Hansen and Marmont to duke it out for the title. I’ve said it before and I’ll say it again though, don’t count out Dan Reardon just yet.

This weekend will see Ben Townley debut in Super X and as a former East Coast Lites Champion in the AMA, he could prove the spoiler at home depending on how much testing he’s completed on the Kawasaki in Supercross.

While it’s believed that Townley will contest the final two rounds of the series in Sydney and Brisbane respectively, I’ve since heard that he’s not 100 percent official for those events at this stage so NZ might be our only chance to see him in action.

We’ll also see Cody Cooper in action this weekend according to the entry list, so it’ll be good to see him return to Supercross action after a strong season in the MX Nationals for Suzuki.

One guy I’ve been told to look out for is Jeff Alessi, who was a surprise addition alongside Jay Marmont at CDR Rockstar Yamaha for the remaining rounds. The word is that Jeff has been in better form than Mike of late, so keep a close watch on him come Saturday.

This year also sees the New Zealand rounds become official title point-scoring rounds for the Lites class, so it’ll be good to see our best Lites contenders go at it overseas for the first time in Super X.

As usual, MotoOnline.com.au will have updates from throughout the weekend and during the night live on the site and on our Twitter page @MotoOnline. Chad Reed will be Honda mounted in 2011 for his own team, TwoTwo Motorsports. Image: Sport The Library.

AMERICAN SUPERCROSS
This week finally saw Chad Reed’s future confirmed, and in another shock to the sport, it’s been decided that the greatest ever Aussie dirt bike rider will go it alone in 2011 and form his own team in TwoTwo Motorsports.

One man who will understand just how tough it is to form your own team is the King of Supercross, Jeremy McGrath, and he has gone out on Racer X Films and explained that it won’t be easy for Reed next season.

We’re just two months out from Anaheim 1, which seems like late notice to form your own team, but we understand that Reedy and his managers began piecing the puzzle together even before the Newcastle round of Super X.

While CR has been riding on Pro Circuit modified production suspension of late, there’s a good chance you’ll see him testing shortly with factory Showa suspension. We’ve also heard whispers that there could be a factory gearbox in his CRF450R after he has been concerned over the stock ’box.

Watch this space for sponsors, but there’s no doubt that collectively, Reedy, WMG and Fluid PR will come up with something cool and unique for next season.

Good luck to all!

That’s all for this week’s Insider, thank you for reading and we look forward to a busy weekend ahead.