MotoOnline.com.au catches up with Launceston Super X round winner Justin Brayton before he heads back to the U.S.

Muscle Milk/Toyota/JGRMX Yamaha rider Justin Brayton has been a standout in the opening three rounds of the Monster Energy Super X, Australasian Supercross Championship, finally getting his first win of the series in Tasmania last Saturday night.

The current AMA Supercross number five has been in exceptional form in the opening rounds despite limited track time while in Australia, going on to win the overall at Launceston with 1-1-4-1 results in the Survival format to edge out fellow Americans Josh Hansen and Kevin Windham.

The Launceston round marked Brayton’s final appearance of the season in Super X as he now returns to the JGRMX team base in North Carolina, so MotoOnline.com.au caught up with him to get his thoughts on his form and stay in Australia. Justin Brayton has been a standout in Super X 2010, both on and off the track with a highlight being a win in Launceston last weekend. Image: Sport The Library.

Yeah, I was pretty excited to get the win tonight because obviously that’s what I came here to do. I’ve been a bit frustrated the past couple of weeks not being able to get up there and get a win, so it’s a cool way to go out and to go back home to the team. I had a great night here, the weather held out and the track was awesome.

You came over for the first three rounds and have improved to the point where you’ve finally won one. It must be kind of bittersweet to be going home now?

For sure, I felt like I had really good speed at the first two, but I’ve put myself in bad situations, made some mistakes and it’s not really like me to crash as much as I did at the first two rounds. I was kinda happy to go home knowing that I’ve been pushing the limits – if I want to be a podium guy in the U.S. then I need to get better and that’s what I’ve been doing.

I’m working hard and it’s been great to do the first three rounds with the different formats, made up of a lot of sprint races. That’s what I kind of struggle with in the States, I’m usually stronger at the end of the moto, so I feel like I’ve learned a lot.

Racing with Kevin [Windham] and Josh [Hansen] has been a lot of fun, and the guys from Australia too. Jay Marmont and those guys have really good speed, so it’s been a good time. I’m bummed to go home, but then again it’s cool to go out on top.

I guess if one thing’s for certain, you’ve had plenty of race preparation over here in Super X. How different is it for you to be racing as preparation for next year’s AMA series?

I think racing is very important. When we were planning on how I was going to prepare going into Supercross [in America], I realised I just need to race. I need to be a better racer and that’s what I’m working on. I feel like I’ve been gaining big strides with that, getting this win and moving forward.

I just need to be a better racer and that’s what we’re focussing on. I’ll go back and then do another race at Geneva in December, and then hopefully we’ll get a win there and keep this momentum going. Windham is one of the greats of the sport and obviously Hansen has a lot of talent on the bike, but you were able to beat your fellow Americans straight up. How much does this boost your confidence heading into next year?

It’s good, really cool to race with those guys over here because they both have really good speed. It’s been fun because Kevin and I had some really good battles last season in Supercross back home, and I don’t think it’s going to be any different this year.

We just need to keep going, need to keep getting better and keep working hard until January and all the way through the series. But like I said, it’s been a good time, Josh and I had a really good race in the last final tonight which was fun, so it’s been really cool.

We see you out here racing every Saturday night at Super X while you’re in Australia, but what have you been up to between rounds? Having some fun or hard at work?

Coming into the series I wanted to obviously take the racing very seriously, but also have a little bit of fun because it’s my first time in Australia. We stayed on the beach in Torquay just south of Melbourne. That’s where Craig Dack, the team manager of the Yamaha team over here lives. He really took us under his wing, showed us a bunch of different things and it’s been a lot of fun.

I haven’t practiced at all during the week and I don’t have a practice bike here, but I’ve been staying on my training and working on my fitness. I’ve seen a lot of things, but now it’s time to get back to the States and really buckle down, start working hard for 2011. I did exactly what I wanted to do over here, which was come and gain some experience, race against some good guys and enjoy myself.

Finally, you mentioned you’d love to come back and do it all over again. Will we see Justin Brayton back full time for Super X next year?

I would love to come back next year. It’s a great warm-up to our series and I think the different formats and everything makes you a better rider. Like I said, I need to become a better racer and I realise that, so I’ll do everything I can to do that this year.

To come back next year would be amazing because I’ve met a lot of cool people over here, so we’ll see what happens and hopefully I can put a deal together to see me next year.

Okay, well congratulations on the win and have a safe trip home!

Cool, thank you, I appreciate it man. 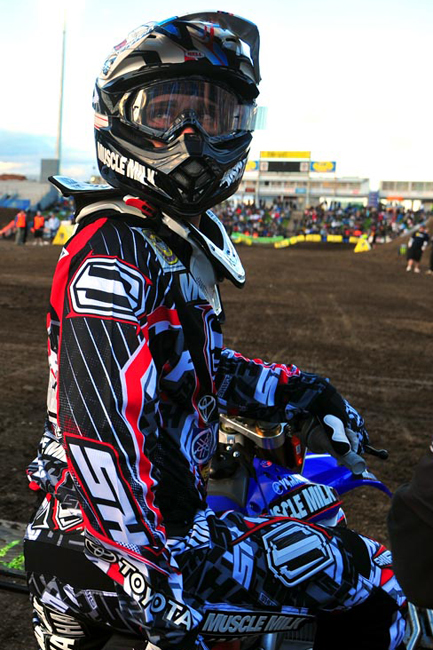 Brayton has returned to the U.S. to focus on the upcoming AMA Supercross season following Launceston. Image: Sport The Library.