MotoOnline.com.au is back again with the latest edition of Racing Insider, featuring the latest from behind the scenes in the sport. Matt Moss is all but confirmed to be switching for Suzuki to KTM for 2011. Image: Sport The Library.

AUSTRALIAN SUPERCROSS
We are just two rounds into the Super X series and already the predictions for who is going where in 2011 are beginning to take over the talk of the paddock.

It’s been rumoured for some time now that Matt Moss has signed for JDR Motorex KTM to contest the Lites class, and apart from KTM confirming it, that seems like it’s a done deal.

Moss will return to Australia on a one year deal to return to the Lites class full time, turning his back on America after an injury-ruled year as teammate to Ryan Dungey on a factory RM-Z450 in 2010.

We shouldn’t really say he’s turning his back on America because if he wins this Lites title here next year then he’ll definitely be planning on going back to the States in 2012 – and what better team to do it with than as part of JDR’s newly-formed U.S. team? It’s a perfect fit for a first class team and a world class rider.

If you listen to speculation this week, Moss isn’t the only one planning to return home full time with KTM before hoping to get another shot at success in America.

Dan Reardon looks likely to be returning to Australia next year with JDR on a 350SX-F, and if you are to believe what many in the industry are claiming this week, the word is he’s already tested the bike. Reardon recently switched from Yamaha to a Honda with the Cougar Bourbon Honda Racing team for Super X, so it’ll be interesting to see where he does in fact end up when the music stops.

Having speculation point to Reardon returning to Australia is purely hearsay at this point though, and if he is truly on the verge of signing with JDR and KTM, there’s no clear indication whether it’s for Australia or the U.S.

Either way, KTM needs a Lites rider to replace PJ Larsen and an Open rider to replace Tye Simmonds in Australia as both are joining the AMA team next season. We believe Ryan Marmont will stay put – possibly on a 350 – while Josh Cachia is also expected to move back to JDR after a strong season under the Coastal KTM tent.

Over at Suzuki, the team is in talks with Jake Moss about a full time return, and Cody Cooper will likely return for another season in the MX Nationals after putting in a solid performance this year. We haven’t heard a thing regarding the Lites.

Kawasaki is an interesting one as Cool Air is pulling its support, however Billy Mackenzie is expected to be back and all indications have Dean Ferris alongside him unless he gets a ride in Europe. In a strange turn of events, we’re hearing Cody Mackie may not be in green next year, so who knows who will be in their Lites program.

Cougar Bourbon Honda Racing would have to be retaining Todd Waters as he continues to build momentum, while your guess is as good as ours for the remainder of the team. I’m sure they’d like to sign Reardon for a full season, but that depends on KTM and also what he may have in America.

CDR Rockstar Yamaha has already confirmed the all-star team of Jay Marmont and Josh Coppins for the MX Nationals, while it’s believed Marmont will be joined by an international rider or two for Supercross. As for Serco Yamaha, Kirk Gibbs and Ford Dale have both done a good job, so they should be back there to spearhead Yamaha’s Lites team.

We understand that Husqvarna is scaling back its outfit, instead focussing on 2012 when a brand new 450 is developed.

The Canberra round was an entertaining one as Kevin Windham showed just how good he is to win on debut, and the good news for Aussie fans is that he’ll be back for Tassie this weekend. We’ll be there too, with all the news, films and images that you could possibly hope for from the event so be sure to check back!

In other Super X news, Dan McCoy will switch from a 350 back to a 450 for this weekend in Launceston, the Hart and Huntington team rider looking for some extra power on the tight Supercross surroundings. His 350 will be taken up by Coastal KTM’s Luke Bond.

In some sad news this week, Luke George announced his retirement at 20, and when I spoke to him on Monday evening, he told me he has plans to go and work a real job to earn some good cash for a while, do some moto coaching and is even hoping of opening a bike park down the track if things go to plan.

He may be only young still, but LG has left a huge mark on the sport as one of the true nice guys and a champion on the track.

It was reported on various news programs this morning that Super X caused $500,000 in damage to the Energy Australia Stadium grounds in Newcastle after the season opener a fortnight ago.

Soccer games have been cancelled from the ground this week, but the big news is that David Beckham’s LA Galaxy game to be staged at the ground next month is in jeopardy because of the conditions of the turf.

There’s a whole heap of controversy regarding the turf that you can check out in this FOX Sports film below. We don’t know the full story and obviously Global Action Sports does all they can to ensure the turf is preserved, so let’s hope this doesn’t do any damage to Super X.

We understand that it’s the time of scheduling for events following the Super X that is the real problem, something which is out of the Super X promoters’ hands.

AUSTRALIAN SUPERBIKE
The big event following the ASBK final coming up in Tasmania next month for most teams will be The 6 Hour at Phillip Island, where it was confirmed this week that Wayne Maxwell and Josh Brookes will team up for the Demolition Plus GAS Honda Racing team – the defending champion team of the event.

Maxwell and Brookes are close friends and the team is on point, so they’ll have to be the pre-race favourites to take out the race once again this year now that it’s moved to Phillip Island.

Other teams we are hearing will be confirmed over the coming weeks are Team Suzuki with Josh Waters and Shawn Giles, while the number two bike could feature Troy Herfoss and Brodie Waters – wouldn’t that be awesome to see!

BMW will be on track with CJC Racing as Craig Coxhell is joined by World Endurance regular Damian Cudlin, who has had a mega season to date in 2010. Don’t forget Coxhell won the race last year on a Honda.

Another BMW will be run by Glenn Scott and former WEC champion Warwick Nowland, making for a solid line-up of young and old in that team.

All in all it’s shaping up to be an epic event, really beginning to cement itself as an important date on the Aussie road racing calendar.

MOTOGP
The Estoril round of the MotoGP World Championship is to take place this weekend, marking the penultimate round of the series before the season finale is run at Valencia seven days later.

It’s gloves off now after Jorge Lorenzo sealed the title at Sepang, and most people are already highly anticipating the post-season test at Valencia where we’ll see Vale Rossi on the Ducati for the first time and Aussie Casey Stoner on a Honda again, amongst a host of other rider changes.

One thing we’re excited to see is Carlos Checa back in the premier class with Pramac Racing this weekend on a Ducati, the current WSBK number three replacing Mika Kallio. They’re blaming injury for Kallio’s absense, but from what we hear, the real reason is he just isn’t enjoying racing right now and the team needs results.

Two riders hoping to return from injury after missing Phillip Island will be Dani Pedrosa and Loris Capirossi, so fingers crossed those guys are fit to go and we’ll see the grid expanded once again.

One thing that we are hearing lately is that Bridgestone is considering pulling out of the control tyre role as soon as its contract is up unless teams are willing to pay for the rubber, so that could cause big changes in the premier class.

WORLD SUPERBIKE
World Superbike begins 2011 testing this week as teams go to work on their new bikes and riders, not to mention the continuation of Pirelli’s control tyre development – a critical test considering it’s the series first visit to Motorland Aragon.

I’m excited for WSBK next year already as the teams shuffling should make for a fresh start, and the good news for Aprilia and British fans is that Leon Camier should be fit to test.

One rider who has a factory contract who we won’t see for a while is Marco Melandri, still finishing off his MotoGP duties with Gresini Racing before switching to Yamaha in WSBK. I’m still uncertain how he’ll adapt judging his form in recent seasons.

As usual, we’ll have all the news from the tests as they happen, so keep an eye out tomorrow morning for the rundown on the first day that’s set to take place this evening.

That’s all for this week, thanks to you guys for reading and remember to spread the word that MotoOnline is the place to be for Australian motorcycle news and entertainment. 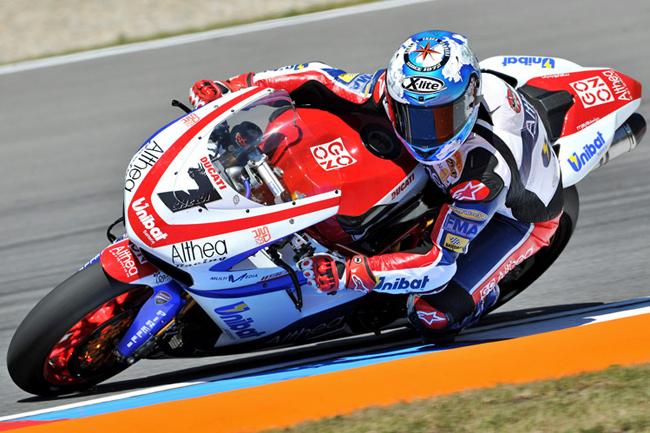 Carlos Checa will be one to watch when he returns to MotoGP for the final two rounds of the season.