Since Monster Energy Super X was introduced in 2008, Australian fans have been lucky enough to see a lot of world class internationals make the trip over to compete against our domestic best.

At last weekend’s Canberra round of the Super X series, legendary GEICO Powersports Honda rider Kevin Windham made his debut, displaying his immense experience and raw talent at 32 to take a clean-sweep in the Triple Header round contested over a trio of seven-lap finals.

Riding for Cougar Bourbon Honda Racing in Australia, Windham was on point throughout the night, smooth as silk and putting a riding clinic on amongst a talented field that featured Australia’s top riders along with countrymen Justin Brayton, Josh Hansen and Mike Alessi.

MotoOnline.com.au tracked down K-Dub directly after the Open class main event to talk about his night, what his plans are while in Australia, and how his preparation is coming along for January’s AMA season opener at Anaheim 1.

Plus, if you’re not into reading, check out our 2010 Super X Canberra Race Reflection film, where Windham sums up his night along with a few other top contenders in the Open and Lites classes. Windham dominated in Canberra to take three wins from three starts in the Open final. Image: Sport The Library.

Kevin, you were able to win on debut with Cougar Bourbon Honda Racing in Canberra, so you must be pretty stoked with that?

I’m so excited, yeah. I mean, I wish Chad [Reed] would have been here to race, but I understand that he has some things he needs to take care of. I’m glad I got my things taken care of in the States so I could come over and race, and I’ve had a lot of fun.

It’s something I want to think about for the future, with me coming over, but right now I’ll soak up the moment and enjoy it. It’s been a great start to my trip, business first, and now I’ll stick around and have some pleasure with the wife and tour around. We’ll see Sydney and some other cities, so I’m glad to have the opportunity.

How much had you heard about Super X before you came over to race yourself?

I just made up my mind that when the gate dropped I was gonna pin it, and it worked out pretty good. I had the one short coming there in the head-to-head race, but all in all to be able to win the heat and the final made it a really incredible night.

You only just arrived in Australia a couple of days before the event, but it looked as though you were able to shake the jetlag…

Yeah, it was a really nice trip over. We left LA at about 11 o’clock at night, landed the next morning and I felt awesome, just unbelievable with no jetlag at all! But actually today I started feeling a little lagged and I’m tired right now. I keep waking up at weird hours of the night, so maybe I should have came over a little earlier, but we had to do what we had to do.

Honestly it’s tough to come to the other side of the world for my wife and I with four kids because there’s holidays in America right now with Halloween and everything.

I know there’s Halloween in Australia as well, but I don’t think they do it quite like we do it in the States. It’s tough, but we wanted to make it worth our while to come over here and to win is a great feeling. Everything has gone right to plan.

You said you guys are going to do some sightseeing now, so have you been to Australia before? What are the chances of seeing you back for Tasmania next Saturday night?

No, actually it’s my first time over here. I still don’t know if I’m going to do Tasmania or if my wife’s going home without me, or if we’re going home together. Maybe I’ll go home on Wednesday or Thursday, if not then the Monday after Tassie.

We’ll just see what happens because, like I said, I’ve got a lot of stuff going on in the States, but I’m already here on the other side of the world and I may as well ride as much as I can while I’m here. One side of me really wants to ride in Tasmania, while the other side of me knows I have obligations back home.

We’ll think about it Monday while we’re in Sydney checking out the Opera House and everything else. 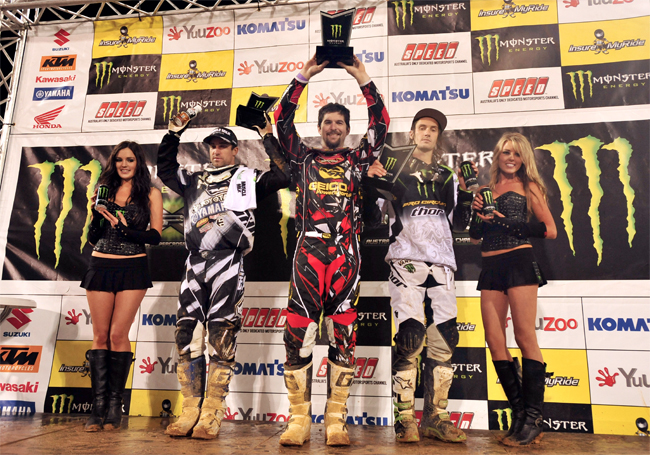 Windham was joined on the all-American podium in Canberra by Brayton (left) and Hansen (right). Image: Sport The Library.

You came out here for this event, got a win and had a perfect result in the finals, so the plan is obviously to try and carry this momentum into 2011 right?

Things went good for me in 2010 and they’re still going well. I’m glad to have finally got my deal back together in the States with the GEICO Powersports Honda team for two more years, which takes me through 2012. That will open me up more for off-season stuff next year and give me the ability to come down again.

So things are going really well, and I can tell you at 32 years old, there were times in my life when I was younger that I got distracted and didn’t ride for the right reasons. But now, with as much riding as I’ve done, this is my life and I’m really scared of the day I have to quit riding – I’m really fearful of that.

With all that said, I really appreciate every lap that I get because I know that my career ahead of me is shorter than what is behind me. I’ve done more races than what I’ll ever do again for ’94 until now, you know?

So my goal is to go four more years and it’s a real special deal for me. When I hang my boots up I’ll be losing a huge part of myself. I’m going to stay in the sport, working with someone or whatever the case may be, but it really helps me appreciate and give it my all at every round I do.

Hopefully I can keep putting my best foot forward when I get back to the States and this win right here in Canberra certainly didn’t hurt that.

Well it’s been a pleasure having you out here, and I’m sure I can speak on behalf of the entire Aussie industry that we’re stoked to finally see you out here man.

Yeah, it was a lot of fun, thank you. You know, I signed autographs all day and I just really wanted to be there for any of the fans who wanted to stop by and meet me while I’m out here. To be out here in Australia, I could sense that everybody was really pumped about it, so that makes it fun for us and that’s why we do it.

Sure, it’s like a job, and sure we like to win and we’re competitive folks, but to have people behind you, liking to see you ride and watching use do what we do is cool. To have fans talk about how excited they are to see me ride live and in person is unbelievable, so the fans of Super X were definitely a big part of my success tonight and the entire trip.