MotoOnline.com.au gets the lowdown on CR’s epic Newcastle Super X win for TeamVodafone.

This time around for Super X, there was no big truck to work out of, no factory bike imported from the United States, and no special tyres developed just for Chad.

The team truck was traded for a ute and the factory bike was replaced by an essentially stock Honda CRF450R, modified only via a host of aftermarket parts from Pro Circuit and a few other companies that have the same parts available off the shelf.

Reed, now 28, was impressive throughout the night, dominating qualifying, winning his heat race and then taking a pair of victories in the 12-lap Double Header format that was run for the night.

In a race held at Newcastle’s Energy Australia Stadium in front of many family members, lifelong friends and vocal fans, Reed stepped up to the plate and looked strikingly familiar to the man who has enjoyed so much success on the world stage.

Following the podium celebrations, MotoOnline.com.au sat down with Reed to see what the night meant to him, how much he is enjoying the Honda and also to get a glimpse as to what the future holds for Australia’s greatest dirt bike rider of all time. Chad Reed was standing tall after his Newcastle Super X victory, and for good reason. Many commented that CR looked the best he ever has... Image: Sport The Library.

First night in the books on the Honda and we’re standing here in the winner’s circle, Reedy. I have to say, a lot of people are saying to me that they witnessed the Chad Reed of old tonight…

I’d be lying if I didn’t say I had an amazing feeling out there, it’s just a great situation really. Not coming in as prepared as what I wanted to, but having a good feeling was good – that’s what you need. If you don’t have that good feeling on the bike then you’re pushing shit up hill kind of thing!

But yeah, I mean, great feeling and I would say I had a feeling of the Chad of old, or even the Chad of new. I would be willing to put it out there that I feel as good, if not better, than what I did on my Suzuki and that’s a positive thing to have.

You said to me the other day at the TeamVodafone launch that you’re not in the best shape of your life and you’re not on a factory bike this time around in Super X, but really it looked like it was just coming easy to you?

Yeah, it was. It just really came to me and I felt like I hit my marks lap after lap. I felt solid everywhere. It’s hard to fault anything that I did other than that one-lap thing where I tried to close the door on Hanny [Josh Hansen] and he went right around the outside.

If I had of went outside then he would have went inside, so I was kinda screwed either way on that one – he had control of me. Other than that it was just an awesome night. I even felt like my starts were pretty good considering that I haven’t been practicing or doing them on a regular basis.

Overall I’m just really excited, and it’s coming from a guy who has no commitments. You look at my bike and it has a very, very small Honda logo on the seat, so for me being pretty much a true privateer is cool. I got suspension off Mitch [Payton, from Pro Circuit], pipes off Mitch and all that kind of stuff, and man, it was a pretty good damn bike.

We get a lot of American visitors checking out MotoOnline to see what the latest is with you’re career while you’re in Australia, so is this a sign to those people back in the U.S. that Chad Reed’s not done yet?

I think so. I think the nature of the beast is that there is a part of the sport, and it’s always been the same, that you’re only as good as your last race. Obviously my last races were extremely below par on my level of thinking and wanting but I felt like tonight that I had that fire and comfort level that it takes to win races in the U.S.

Tonight you’re at your home ground, well I guess it’s really the home ground of the Newcastle Knights NRL team, but you have a lot of family and friends here from your hometown. How enjoyable was it for you to win in front of those guys tonight?

Yeah, it was awesome! It brings a lot of pressure I guess, and that’s what I kind of said to you during the week, that you’re coming in under prepared, but at the end of the day your enthusiastic about it and just excited.

I think that really pays and on some levels it’s actually better than coming in at 100 percent because you’re just so excited and kind of running with it. It was an awesome achievement, excited to have the Supercross back in Newcastle and yeah, it was a good weekend. 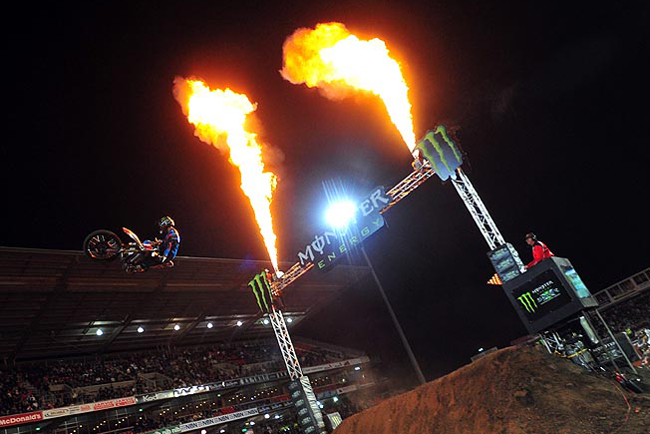 Reed's hometown victory in front of the Newcastle fans was a popular one on debut with TeamVodafone. Image: Sport The Library.

So where to from here? Obviously victory always raises that excited, so will we see you back again at Super X this year?

Nah, no more races here, but it definitely excites me. You know, as everybody knows, 2010 was very, very tough, and it was just a year that left… I never doubted myself, but I think a lot of people were doubting me. I mean, it’s that thing where you’re only as good as your last race.

People think I’ve lost a friend, I’ve had a kid, I’m not committed, I’m greedy, I want money and all that kind of stuff, but tonight I’ll leave here knowing that the fire is here still as strong as ever. With the right program and with the right effort, I can still be competitive and challenge for championships in the U.S.

It’s definitely obvious you have what it takes still, that’s for sure. You have a pretty cool ride here, an awesome looking TeamVodafone bike. How did it all come together and who do you have to thank for being here on the start gates this week?

Well for sure, Matt Cousins from Fluid PR worked his butt off and I know he had some sleepless nights. Man, I’m just really thankful to have him and also Pip Harrison from Honda. Just being around people like that has been real positive.

Matt and I were here early this morning setting up, and I think together at the end of the day we brought something really unique to the sport that really hasn’t been scene.

When you look at the bike it makes you think of the TeamVodafone V8 Supercar team run by Triple 8 Racing here in Australia, as well as the McLaren Mercedes Formula One team. That’s a level that I feel Matt and I are really proud to have gotten to.

Well congratulations again pal, I think we can safely say that all of Australia is right behind you and we hope to see you come out challenging for a third AMA and World title at Anaheim 1 in January.

Thanks, you know, that’s the goal for sure. I feel like I’m letting a lot of people down by not racing the rest of this series, but I’m 100 percent committed by trying to get a ride in the U.S. and doing all that right. I think if I do it right I can be the guy that’s always challenged. I think that’s the priority, that’s the goal, and if it happens quick then you’ll see me at the last couple – who knows!

Okay cool – let’s hope so. Thanks a lot.

Thanks, Al. Appreciate it bud! 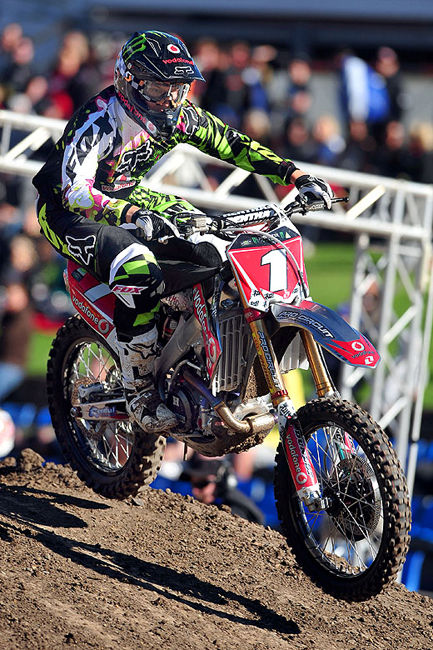 Reed was attacking the track from the very first lap in practice. For a guy who hasn't ridden much of late, he was on point. Image: Sport The Library.