Catch up on the latest in the sport before the most important weekend of the year in Aussie racing.

This weekend has to be the biggest of the year in Australian motorcycle racing, with the season opener of the Monster Energy Super X series taking place as well as the Australian Motorcycle Grand Prix.

Luckily enough for MotoOnline visitors, we’ll be at both and covering the events every inch along the way, so stay tuned for a massive weekend of two-wheel action. 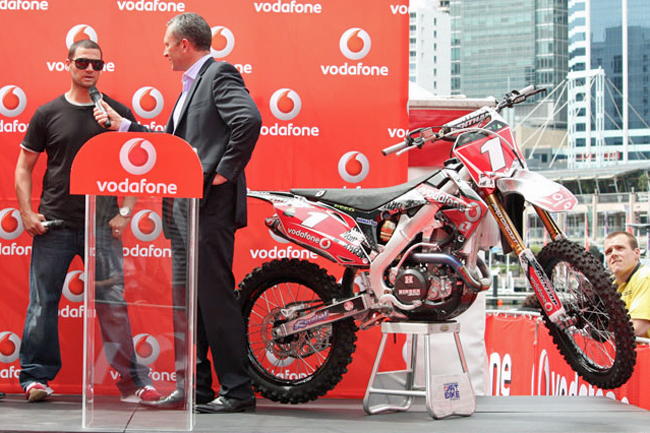 TeamVodafone and Chad Reed made headlines with an impressive team launch at Darling Harbour today.

AUSTRALIAN SUPERCROSS
The big news in Australian Supercross this week has been the revelation that Chad Reed has officially joined TeamVodafone to contest this weekend’s Super X opener in Newcastle.

Reedy is only confirmed to be doing Newcastle and says he’s yet to find a deal on his terms for 2011 in the AMA just yet, so that’s his priority at this point of the year.

The deal marks a huge one in Aussie racing, and we were lucky enough to go along to the team launch in Darling Harbour today to get the full scoop with CR including an interview that will be uploaded tomorrow morning.

Reedy will also show his support of the Newcastle Knights this weekend with a cool decal on the back of his Monster Energy-supported FOX helmet, since the event will be held at Energy Australia Stadium – the home of the Knights National Rugby League Team.

Reed has actually been riding with Mike Alessi since the American came over to Australia for Super X, and he even said on Twitter last night that he rode a 350 – we’re not sure if it was Alessi’s, but it was on the same day that Mike was riding at his house yesterday!

Meanwhile, we had Out of Bounds Film Company’s Guy Streeter out at the Marmont’s track filming with Jay, Ryan and Alessi today, so be sure to check that footage out when we get it done!

Streeter has come onboard here at MotoOnline as our official film crew and today was the first day on location – a pretty cool location to be at with some of the favourites for this weekend’s race.

Stay tuned for lots more cool stuff from Streeter and Out of Bounds over the coming weeks and be sure to spread the word that we’ve got one of the best guys in the business producing exclusive Aussie content right here for MotoOnline.

From what I hear, Jay is on the gas, Alessi is picking up Super X too and JGR Yamaha regular Brayton will be one to watch in his guest rides with CDR.

Doggy is also said to be in form in his Supercross return onboard a KTM, and we’ve been hearing that PJ Larsen is just as spectacular at Supercross as what he was in the MX Nationals this year on his way to the Lites crown.

It was a surprise this week to hear that Cheyne Boyd will sit out at least the first three rounds of Super X due to an ankle injury, with young development rider Ross Beaton set to partner Jay Marmont at CDR. Get well soon, Boydy!

All things considered, the Newcastle opener is going to be a huge start to the series, so make sure you get out there and support what is Super X’s third season of running – Global Action Sports deserves all the support they can get because they’ve done a mega job of putting Aussie Supercross on the map.

For those looking for some online fun, we’ll have an unofficial Supercross Tipping Competition that’s already up and running, so be sure to sign up to the iMoto Community and get your entries in right here in the Forum today.

Also run in conjunction with Super X will be our ever-popular MX vs. ATV Reflex Series, so if you’re into online gaming enter via the Forum and come play each and every Tuesday starting next week!

MOTOGP
This weekend’s Australian Motorcycle Grand Prix weekend is shaping up to be one of the best MotoGP events of the season, with Aussie hero Casey Stoner shooting for four straight wins, Vale Rossi return to form after his Malaysian win and Jorge Lorenzo now able to go all out as the pressure’s off.

The GP weekend is always a massive one for motorcycle racing and motorcycling in general for Australia, and the on-track action will almost be matched by the off-track activities available to fans at Phillip Island throughout the weekend.

Personally, I’m looking forward to the Moto2 race as ASBK regular Wayne Maxwell is set to make his international debut in GP racing, and you only have to look back to his form on a 600 in 2008 to see just how capable he is on any size machine despite being a fairly tall guy.

We’ll also be keeping a close eye on Alex Cudlin throughout the weekend as he’ll make his Moto2 debut, and you can bet that he’ll be motivated to match brother Damian’s seventh that he picked up at Sachsenring earlier this year as a wildcard.

Don’t forget the kids in the 125cc GP class either, since they’ll be eager to put their best feet forward. In case you missed it during the week, check out this feature story we compiled from Motorcycling Australia so visitors can learn all about Australia’s riding GP stars.

If you are on hand at the Island this weekend or happen to pick up a program, be sure to check out the full page MotoOnline.com.au advertisement and show your mates too!

In other MotoGP news, concerning news from Europe is that Pramac Ducati will downsize to one rider next year if the budget can’t be sourced to run two, while the ongoing rumour of Suzuki scaling back to a single rider team is becoming increasingly more likely.

The good news is that Suzuki isn’t quitting GP racing, but simply concentrating on its 1000cc effort that will take off when the regulations are revised for 2012 – you can’t blame them if that is in fact what they do.

The latest rumour has new Moto2 world champion Toni Elias joining Pramac in a move from Dorna to ensure the team retains two riders for next year – he’ll be teammates with Loris Capirossi if the move is completed.

Finally, Ten Kate Honda Superbike rider Max Neukirchner is rumoured to be joining the new Ducati satellite team alongside Karel Abraham – no, we are not joking! Money does talk…

we just got this news in: Carlos Checa tested a Ducati GP bike at Mugello yesterday and the Europeans are reporting that he’ll ride it in the final two GPs of the season, replacing Mika Kallio on the Pramac team after the Finn has had a disastrous weekend. Look for confirmation this weekend. 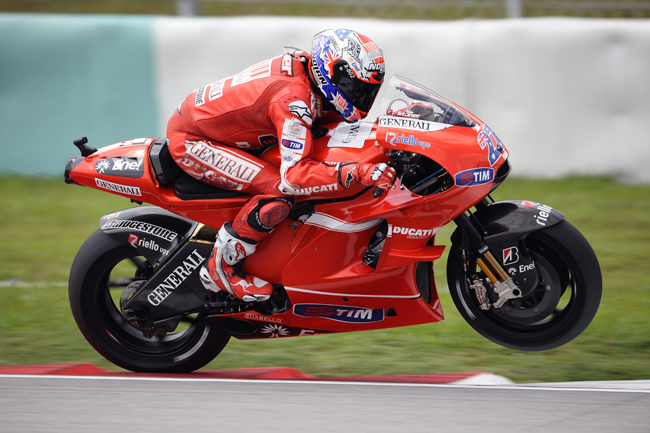 Aussie fans will be cheering on Casey Stoner for Phillip Island win number four on Sunday.

AUSTRALIAN SUPERBIKES
Not only will the GP races feature over the weekend, but a trio of non-championship Australian Superbike and Supersport races will also offer some great excitement.

Team Suzuki’s Josh Waters will be back after his crushing head injury that ruled him out of his ASBK title defence, and that has to be the headline story for the weekend – don’t rule him out of a good result, either!

The second most interesting topic is the fact that regular factory KTM rider Shannon Johnson will replace Maxwell at Demolition Plus GAS Honda Racing, so keep an eye on him to make an impact come race day.

Finally, if you notice the lap times are a lot quicker this weekend than what they were in previous ASBK rounds run at the Island this season, don’t forget that the Dunlop control tyre won’t be enforced.

We’re hearing that most will be on Dunlop’s N-Tec rubber, but don’t be surprised if some surprises creep into the mix in the other manufacturer’s only chance to compete at a top level in Australian road racing this season…

Speaking of surprises, the big rumour getting around the Phillip Island Ride Day last week, which many ASBK teams were using as a test, was that Motologic Racing could return to Honda for 2011.

As bizarre as it sounds since the team only switched from Honda to Ducati this year, people from all directions have been contacting us asking if it was true. We’ll try to find out, but do remind you that it is only speculation at this point.

Valvoline Superbike Team rider Glenn Allerton has signed for the factory Yamaha Racing Team to contest the remaining Formula Xtreme events of 2010, said to be on the pace in testing at Eastern Creek on Monday.

Allerton was originally penciled in to ride a Honda at the final round, however we are now hearing that Shannon Johnson may yet be called up as the ‘super-sub’ for the round alongside Grant Hay on the Big Kahua Racing/Shock Treatment ride.

AUSTRALIAN OFF-ROAD
Two-time Australian Off-Road Champion Toby Price is said to be on the verge of signing a deal for KTM to contest the Enduro World Championship in Europe next season.

Price impressed in France at the 2010 season finale last month, and in talking to David Knight recently at the Magny-Cours World Superbike round, the E3 World Champion said he believes Price has what it takes to go all the way.

While Price looks certain to go overseas to Europe, Husqvarna factory rider Chris Hollis is set to return after just one year in the world championship this season.

It’s not known what team Hollis will ride for in the AORC if he does in fact come home, but we’re hearing that Husqvarna is expanding its factory enduro operation for 2011 with the arrival of the cool new TE449. We’ll keep an eye on it all as it happens.

That’s all for this week, thanks for reading as usual! If you’re looking for me, I’ll probably be on an airplane somewhere between Sydney and Melbourne going back and forth between the GP and Super X – can’t wait!