Top 10: Things from the Motocross of Nations

In what was a very exciting and spectacular Red Bull FIM Motocross of Nations I thought it might be a good idea to go through my top 10 things of the event.

Obviously Team USA stood tall and retained their MXoN trophy of 2009, but there were others who also showed amazing speed.

It was a weird and wonderful event as nearly every team had problems or their riders suffered poor form. Only Team Belgium kept out of trouble, but all three riders looked uneasy around the Thunder Valley circuit. Here is my top 10. 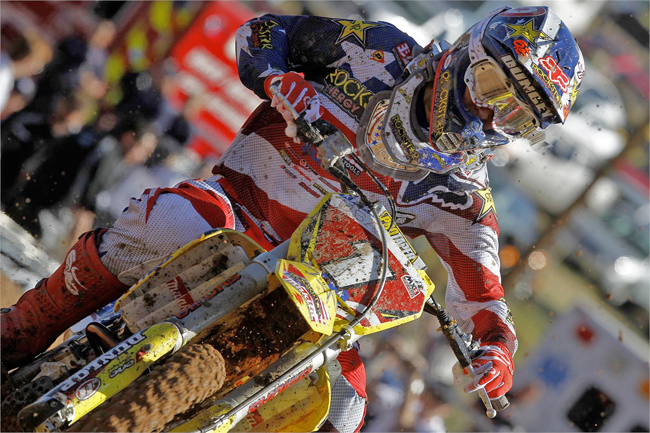 RYAN DUNGEY
How can this guy not be number one? Going 1-1 after tasting defeat at the hands of World Motocross Champion Antonio Cairoli on Saturday Dungey showed just how tough he is by surviving a classic battle with Cairoli in Sunday opening moto and then blowing the field away with a win in the last moto of the weekend. Not only a super nice guy, but a tough competitor who now stands at the very top of the World rankings.

THE CROWD
As is the case every year it’s the crowd that brings this event alive. A massive crowd turned out for the race with the huge hillside area splashed with American, Italian, British, French and Australasian flags. The moment the local fans went wild when Dungey and Short came around first and second in that last moto was just magic. The valley echoed with the roar of USA, USA, USA.

KEN ROCZEN
How good is this kid? He won the hearts of the American spectators and received huge applause for his second moto third place. Having raced in the opening moto he ran out of gas while leading the race, but his style and speed was noticed by everyone. Bring on 2010 and what could be a championship winning year.

YOUTHSTREAM
Without them an event like this would NEVER happen. Love them or hate them you can’t deny they have changed the sport forever and from what I can see it’s going in a great direction. Youthstreams staff were out in numbers and once again keeping this magical event in total control.

BRETT METCALFE
Now hasn’t this Aussie improved? He looked good in the 2008 and 2009 MXoN, but this year he was awesome. He might not have gotten the overall win in the MX1 class and he didn’t beat Antonio Cairoli for second overall behind Dungey, but he showed that he is World class and the veteran’s future looks good.

TEAM BELGIUM
Oh so close to winning the thing. All rode consistently and while Desalle, Ramon and Van Horebeek didn’t show their best form, they showed enough to put huge pressure on Team USA in that last moto. Led by Joel Smets this team will be a heavy favorite when we get to Lommel in 2012 for the MXoN.

TEAM USA
What an amazing group of young men. Not only did they show their speed was good enough to take the trophy, but they also showed class in victory. All three riders sat around in the press room after the event doing interviews and posing for photos. Around an hour after giving every journalist what they wanted the boys went and partied. Respect to the best in the World.

ANTONIO CAIROLI
Came to Denver with a bike that was 100cc down on the 450’s and still walked away with a moto win on Saturday and gave us a great battle with Dungey on Sunday. It was obvious his bike was down on power at the high altitude, but he fought on and did the Grand Prix series proud. Every time he landed short on the biggest jump on the circuit the whole paddock took a deep breath.

TEAM GREAT BRITAIN
Nearly on the podium and with a stop gap team. Dean Wilson rode brilliantly, and Brad Anderson and Jake Nicholls gave it everything they had to back him up. Only a mechanical failure by Nicholls in the opening moto stole their possible podium glory. It would have been a surprising result for a team full of fight and motivation.

THE PADDOCK
The atmosphere between the teams was amazing. While Thunder Valleys paddock area was one long walk, the buzz from the riders, mechanics and team members was casual. The days of Team USA standing over the other teams like a movie star set are gone. Aren’t we all happy about that. 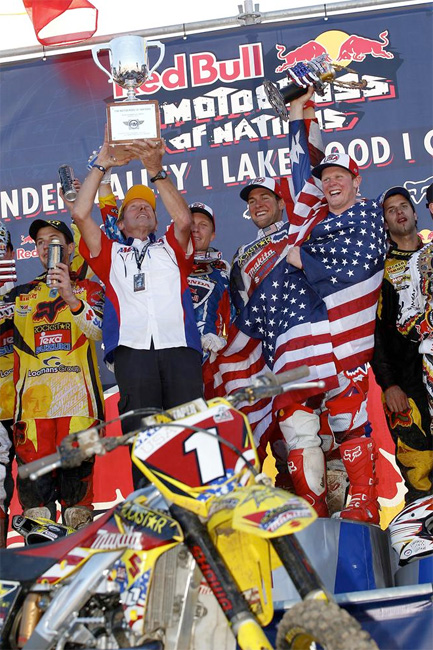