MotoOnline.com.au looks at the leading topics in the world of motorcycle racing for another week. MotoOnline.com.au will be coming direct from France's World Superbike finale this weekend, and then riding the top factory bikes on Monday!

WORLD SUPERBIKE
The 2010 season finale is set to take place this weekend at Magny-Cours in France, however much of the hype surrounds the Supersport title fight between Kenan Sofuoglu and Eugene Laverty.

Max Biaggi sealing the Superbike crown in Italy at Imola last weekend for Aprilia, which was an outstanding effort for both he and the relatively small Italian manufacturer from Noale.

It’s hard to believe that Biaggi’s title is the first for an Italian rider in World Superbike considering their dominance in grand prix racing over the years, however it’s even harder to believe that just one European rider has won the title previously when Raymond Roche won in 1990.

Apart from Frenchman Roche’s crown, the Italian-run series has belonged to Australian, American and British riders respectively, which is possibly due to those countries’ ultra strong domestic Superbikes series.

The good news for MotoOnline readers is that we’re heading to the season finale this weekend in France, however the race weekend isn’t the focus of the trip – it’s the post-season media test where we’ll sample no less than 10 factory Superbike and Supersport bikes!

MotoOnline is going global for the first time since we launched in March last year, so we are super pumped to be able to bring you guys all the exotica that makes up the WSBK grid while also being able to enjoy the season finale after what has been an epic Superbike season.

Personally, I’m also honoured to be able to witness Ducati Xerox’s final outing as a full factory WSBK effort after what has been a historic journey for the Italian team.

That leaves Biaggi yet to re-sign with Aprilia, while both Althea Ducati and Alstare Suzuki are possibly downsizing to one rider teams.

It’s expected that Michel Fabrizio will either join Alstare Suzuki or Althea Ducati, while Vermeulen will be partnered by Spaniard Joan Lascorz – making for a sticky situation at Kawasaki considering Tom Sykes’ form of late!

As for Nori Haga, he won’t be retiring as all expectations are that he’ll be onboard a factory Aprilia run by the DFX team.

It seems as though WSBK is set for a turnover of talent of sorts in 2011, making arguably the most exciting series of the year even better for next season.

Stay tuned for a host of updates throughout the weekend direct from Magny-Cours!

MOTOGP
The Grand Prix of Japan takes place this weekend after being postponed at the beginning of the year, marking a very special race for the Japanese manufacturers in the series.

While we’re all excited for the title fight to resume between leader Jorge Lorenzo and the in-form Dani Pedrosa, it’ll be a sad weekend as many remember fallen Moto2 hero Shoya Tomizawa.

Many memories are sure to flow this weekend and Shoya has been announced as the recipient of this season’s Michel Métraux trophy, which recognises the best rider in the category as selected by his competitors.

Michel Metraux’s son Olivier will present the trophy to Shoya’s family this weekend in Japan, so that will be a touching tribute to the talented Japanese rider.

From an Australian standpoint, it was excellent to have Casey Stoner back in the mainstream media following his epic Aragon win at the most recent round, with his momentum building at the right time yet again as the Australian GP approaches next month.

Casey has never won in Japan and says he doesn’t like the circuit layout, however fingers crossed he can make it two in a row come Sunday afternoon at Motegi.

Man, that’s a grand prix I’d love to go and check out! 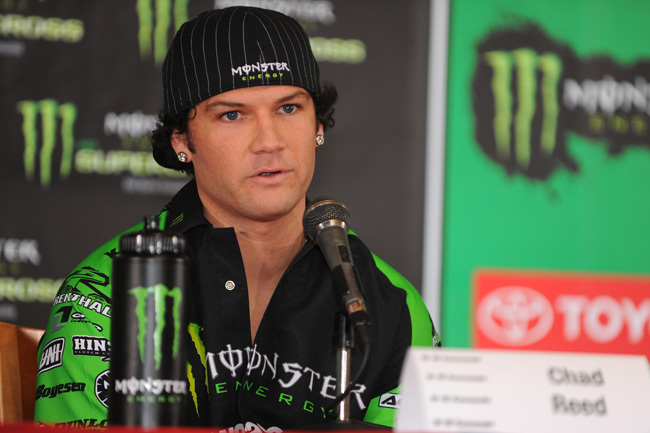 Will Chad Reed be on th estart gates at Super X next month in Newcastle? His Twitter suggests he might be.

Judging by Chad Reed’s Twitter account it would seem that he’s planning on contesting the Newcastle’s opening round, however after that we are in the dark!

The question is, what bike will the TwoTwo rock up on at Newcastle? Last time out we saw him on a Honda, however the speculation is still circulating that he’s on the shopping list of KTM.

Either way, there’s no doubt that the hype Reed will take to his home round at Newcastle will be a huge opener for Super X in its all-important third year of competition.

We’re still hearing that Dan Reardon will be back with Honda for Super X alongside Todd Waters, however he’s also been linked to other manufacturers and has been riding Yamaha in the States of late. A surprise could emerge here, for both Super X and 2011.

There has been no confirmation of Josh Hansen coming for Kawasaki just yet, but there are still indications that he’ll be here come round one and for the remainder of the season.

Considering Hanny rides Supercross-only in the States, Super X would have to be the perfect way for him to get back on track and start racing in a warm-up again.

WORLD MOTOCROSS
The Motocross of Nations have been run and won for another year, with Team USA taking victory as expected on home soil at Thunder Valley in Colorado.

But it was the underdog Australian team who impressed on Sunday as American-based Brett Metcalfe lead Australian domestic-based local stars Jay Marmont and Dean Ferris to sixth overall for the event.

Metcalfe was as solid as we’d expect after he recently captured second in the AMA Motocross Championship behind Ryan Dungey, while Marmont was a standout on Sunday as he stepped up to the plate and went at it against the world’s best.

Team Australia had a strong presence at the MXoN this year, with Ferris joining Metcalfe under the GEICO Powersports Honda tent on one of the team’s CRF250s, while Marmont was pitted with Valli Motorsport on his regular CDR Rockstar Yamaha YZ450F.

Congratulations to all involved!

AUSTRALIAN SUPERBIKE
An important meeting regarding ASBK 2011 was had in Melbourne late last week, with many industry identities and team owners/managers meeting with International Entertainment Group and Motorcycling Australia to discuss the future of the sport.

Now, most involved are remaining tight lipped regarding the meeting, however we can confirm the following revelations that have been exposed to us this week:

While none of these points have officially been confirmed, we can tell you that these are the plans as of the close of the meeting. Stay tuned for an update in a news story to be uploaded on Friday.

That’s all for this week, thanks for reading! 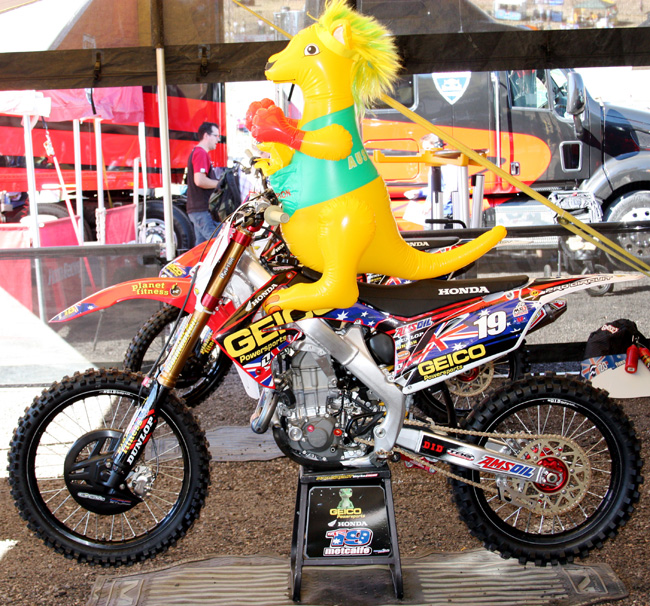 Team Australia made a big impact at this year's MXoN event in the USA over the weekend.