MotoOnline chats with three-time MX Nationals champ Jay Marmont after he took the title at Coolum on Sunday. Every so often in sport there are times when you just have to stand up and take notice of history in the making, and in Australian motocross circles, Jay Marmont has etched himself as a legend of the sport.

Marmont joins the likes of team boss Craig Dack and fellow Yamaha legend Stephen Gall in the three-time champions list of Australian motocross, and you can’t forget that Marmont has a pair of Supercross championships to his name from 2003 and 2004.

MotoOnline.com.au sat down with the 27-year-old for a quick Post Race interview after the podium celebrations were complete at Coolum on Sunday afternoon to speak about his success and what the future holds for Jay Marmont.

Congratulations on three straight championships Jay, it must feel awesome to achieve that feat and further establish yourself as one of the best ever in Aussie motocross.

Yeah, it feels awesome. You know, championships don’t come easy and this year has been a tough one from the word go. It’s been testing, but once I got the championship lead at Toowoomba I’ve had it ever since.

It was really close today, Billy pretty much won every single race except for one and was on a charge – he was getting maximum points on me. He put all the pressure in the world on me, so it’s good to be here with the number one plate for the third year in a row.

That second moto today saw you have to come in for a ‘stop and go’ 20-second penalty after you cleared the first jump on the opening lap, so what was the deal there? Just too excited to holeshot?!

Well I came up to the big jump and I was focussing on [Dean] Ferris, racing him, and by the time I got to the up-ramp I just couldn’t pull up. I jumped it and paid the ultimate price with the 20-second penalty, drifting back to seventh in the race. I still got third on the day though, which was a pretty good achievement for me – gave me enough points to wrap up the championship and get it done!

You got a breakthrough win at Moree last weekend, which set you up for the title with a 40-point lead coming into Coolum, and then you managed to maintain that lead yesterday. What was going through your mind when you were stopped on the side of the track watching the field race by as you served your penalty time?

You know, I really didn’t realise until I was on the up-ramp, but I couldn’t pull out because I had so much speed going up to the jump. At that point I thought it’d be safer for me to jump it and I landed on the end of it – didn’t exactly land on the down-ramp.

I knew I had a 20-second penalty because I saw it happen earlier in the day with Cam Taylor, but it’s just so hard to go up to a jump that you’re used to jumping every lap and shutting it off. There was just sop much going through my mind, but I copped the penalty and I was very upset at myself.

After that I was able to bounce back though, taking second in the third moto and then rounding out the series with third in the final moto to clinch the title. 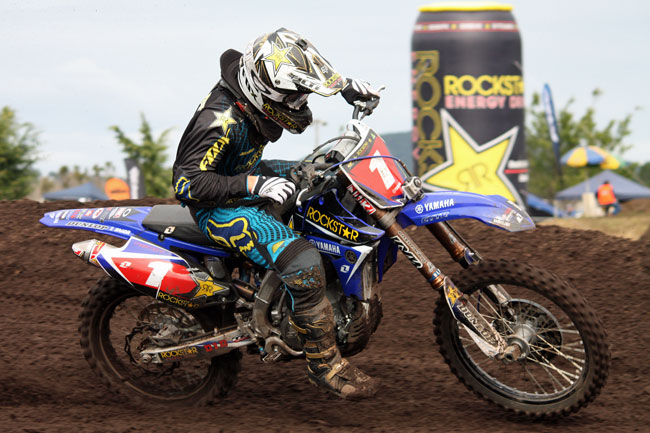 Marmont has maintained the red plate since Toowoomba, and will retain the #1 plate for 2011.

Australian motocross is probably at an all-time high when it comes to competition when you consider guys like BillyMac are here racing fulltime, so how hard was it to win this third title?

It was very hard at the start because we have been developing a new bike with the YZ450F, but in the end we got it really good after a lot of testing to start the year.

When I look back to the Moree round I think it was one of the best rides I’ve ever had in my whole life. I felt so good on the bike and was pretty much dominant.

Even this weekend at Coolum was really good even though I had to play it smart and stay consistent. One crash could have cost us a lot, so I just wanted to bring it home and I did that, which was enough points to finish on the podium for the day and win the title. I’m so pumped for my team, we’re the first Yamaha team in the world to win a championship on the new 450.

For me it’s a big thing to win three in a row, so I’d like to thank my wife Abby, plus all my personal sponsors – FOX, Oakley, Ogio and all the guys for looking after me and supporting me. This is my chance to give back to them and I’m very excited and happy.

You mentioned on the podium that you’re going to try and go do the last two rounds of the AMA Motocross Nationals that are coming up, so what are the chances of that?

I want to go and do a race where I don’t have pressure on me to perform in the championship. I’ve always got that pressure of having the number one plate on my back and everyone’s gunning to beat me, so it’d be great to go over to the States and maybe do the final two rounds.

I’m not sure where Reedy’s [Chad Reed] at with his health at the moment, but I really want to get a place in the Des Nations team this year. It’d be a huge deal for me to represent my country so I definitely want to do that, and then we have Super X at the end of the year.

It’s going to be busy in the next few months, but hopefully it all comes together and turns out good.

Well congratulations once again on winning the title, I’m sure that everybody in Australia would be happy to see you represent Australia in the Des Nations as a three-time outdoor champion…

Yeah, for sure, I really appreciate everybody’s support. I know I’ve built up a lot of fans out there who have followed me in the last couple of years, so this title’s for them as well as myself.

Thanks Jay, excellent work once again!

No worries Al, thank you. 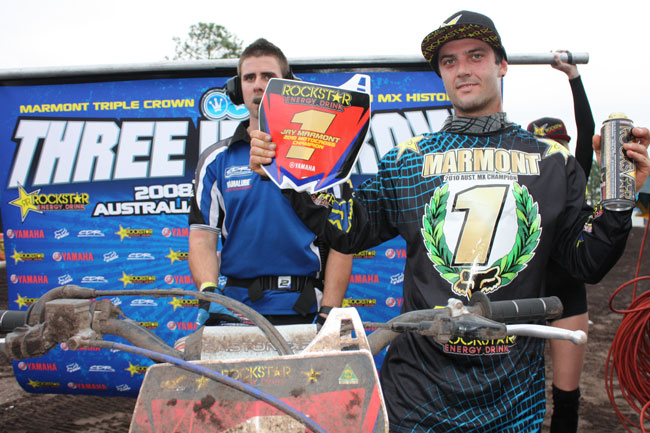 Marmont adds a third MX Nationals crown to the supercross titles he won in 2003 and 2004.