Rockstar Suzuki’s Jake Moss talks about round one of the Monster Energy AMA Supercross East Coast Lites from last weekend. Jake Moss is on the Rockstar Energy Suzuki team in 2010.

The Moss brothers are two of the hottest prospects in American Motocross right now, their unarguable talent and raw speed capturing the attention of some of the best in the business.

For 2010, Jake will spend his third season in the States, this year riding for the factory-supported Rockstar Energy Suzuki team in the AMA Supercross East Coast Lites division, while twin brother Matt will contest the 450 class for the Rockstar Makita Suzuki factory team once he returns from injury.

Jake’s season got underway in Indianapolis last weekend, debuting for the season with a 12th place finish as he rebuilds his fitness and confidence following the nasty wrist injury suffered in Tasmania last October that forced him out of the entire Super X series.

MotoOnline.com.au checked in with him this afternoon to see where he’s at and how we should expect his season to progress from this point to the Las Vegas finale in May.

The first round of the East Coast Lites series was held in Indianapolis last weekend, so how did it go for you?

It was good. I struggled with arm pump because I had only ridden a Supercross track like six times before the round, which wasn’t the best, but I’m looking forward to next week.

You came back from a pretty bad injury after injuring your wrist in Tasmania’s Super X round last year, so is that all healed up now?

My wrist is back to 100 percent now, but I still overcompensate a lot with my right hand, so things should improve from here now that I’m back riding and racing again.

Did you get to ride much before the first round? It must be tough coming back after a few months off the bike.

I rode for about three weeks before last weekend, but I did a lot of training off the bike and that helped out a lot. I’ve got a new trainer over here, been doing a lot to get in shape, but I didn’t even get to do a 15-lap practice before the race last weekend so I knew I wasn’t ready.

So when you rode again you mostly rode Motocross to get comfortable on the bike again before hitting up the Supercross track?

Yeah, I did two weeks of Motocross and then a week of Supercross, so I didn’t have too much time to get ready for the first round. 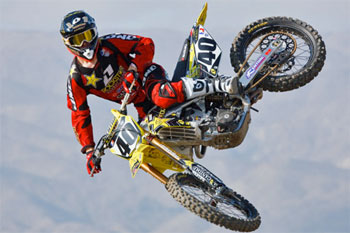 Moss will run the number 40 this season.

You’re returning from injury and will obviously get a lot stronger from this point, so what are you expectations for the rest of the season in Supercross?

Ah, I just want to podium in a few races at least by the end of the year, that’s what my goal is. I really think that’s where I should be, so yeah podium, for sure.

And you’re on Suzuki with the Rockstar Energy team this year, so are you all settled in there now?

Yeah, well we are still racing 2009 bikes, but they have a lot of factory stuff from Ryan Dungey’s bike from last year so it’s the best bike that I’ve ever ridden. The team’s got a lot of money, their workshop is perfect, it’s a sick truck and a lot of workers helping out, so it’s pretty good.

Well they haven’t sold them over here because they stopped production over here until they get rid of every 2009 model, but it’s okay, the bike is good this year.

So you’re on the Lites bike for the Supercross, is the plan to move up to the 450 for the Nationals?

We’re not 100 percent sure yet at this stage. It looks as though I’ll be on the 450, but if I end up doing good in the Supercross then there is a chance that they might keep me on the Lites bike for the outdoors.

Cool man, well thanks for that and good luck for the rest of the Supercross season.

Yeah, thanks for that.