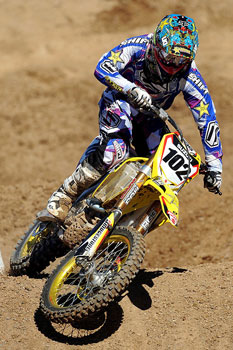 Moss in action aboard the RM-Z450 in Brisbane. Image: Sport The Library.

But the 21-year-old reigning Australian Pro Lites Supercross and Motocross Champion is certain to miss Anaheim’s opening round of the AMA Supercross Championship on 9 January, with an eight week healing time on the cards.

Moss was racing through the field after an opening lap collision with Dan Reardon in the second final of the Triple Challenge format that was featured in Brisbane’s finale, until a late-race crash in the whoops ruled him out of the remainder of the night.

The official diagnosis of Moss’ injury is that he’s suffered a 30 percent compression of the T5 vertebra, effectively ruling him out of the Anaheim opener that was set to be his debut in the 450 class with Roger De Coster’s factory effort in the U.S.

If Moss is in fact off the bike for an eight week period, fans can expect to see him make his highly anticipated debut in early February, with the fifth round of the 2010 series scheduled to take place at Qualcomm Stadium in San Diego, California, on 6 February.

Moss will travel to the U.S. in two weeks time in order to settle into his new surroundings for the new season.