MotoOnline.com.au catches up with Kawasaki's Troy Carroll following his retirement from racing after Brisbane’s Super X round.

The name Troy Carroll has become synonymous with Australian motocross, first as a multiple time national champion and then recently as an integral part the Cool Air Kawasaki Racing Team.

Carroll won 12 junior national titles before turning professional in the senior ranks for the 1996 season, winning the Australian 125cc Supercross Championship in his first attempt and then adding various titles in Supercross, Motocross and the Thumper Nats to make for a total of 12 in his senior career.

Not only has Carroll won all of those national title, but the popular Queenslander also represented Australia in the Motocross des Nations back in 1997

It’s been an epic run for 30-year-old Carroll during his career that has spanned almost 25 years, with the management of the Cool Air Kawasaki team becoming his priority for 2010 after managing the team while also riding in recent seasons.

MotoOnline.com.au spoke with Carroll a few days following his retirement from the sport at Brisbane’s Super X finale, finding out what life’s like without the pressures of being a pro motocrosser once and for all.

TC, it’s all over mate. How’d it feel to take the chequered flag one last time at Brisbane in front of your hometown fans and supporters?

I guess one feeling I’ve felt is a big weight off my shoulders, you know, I was glad to finish in front of my family and friends, but also now I know that I’ve got a big job ahead of me in running the race team for Kawasaki. It’s kind of like one door has closed, but another has opened. I know that it’s going to be just as much hard work, if not more. 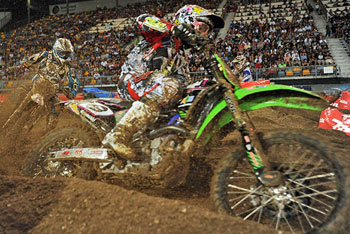 TC in action during his final bout at Brisbane last weekend. Image: Sport The Library.

As far as the transition goes into being the team manager for Kawasaki’s factory team, it should be pretty smooth since you’ve been managing your team part-time this year, right?

Yeah, I guess that’s a big part of why I struggled so much with my speed, because I was always putting the team first and making sure the other riders were alright, and everything like that. For me, I’ve been doing the management side of things for the last year and a half and really enjoy it, but it has made my riding suffer somewhat as well.

You’re a rider who has enjoyed much success over the years, so can we expect to see you put as much heart and effort into the new role as you did with your racing?

For sure. It’s not a matter of whether or not we’re going to win championships, it’s more a matter of when we are going to. I’m going to do it with our guys and I know that I can help them to win with my experience in racing. I know that it will all work out really good. I’ve worked closely with Cody [Mackie] this year and brought him along in leaps and bounds, so I’m really excited about taking this new job. I just know that we can win championships together.

And who will we see under the guidance of you in the factory Kawasaki team next year?

We’ve got three guys confirmed so far. We have Billy McKenzie for the Pro Opens, Cody for the Pro Lites and Luke Arbon for the Under 19s. It will be those three guys and we could possibly have more.

You’ve had a long career filled with championships, so is this the way that you imagined you’d bow out? That was a hell of a burnout you did for the fans on Saturday night!

Well it was and it wasn’t. I would have liked my results to have been better, but I couldn’t ask for anything more than to finish my last race in Brisbane in front of all my family. If it was overseas or in Perth, or somewhere, then it probably wouldn’t have been so special. It was great to wrap it up in front of my hometown crowd.

How tough has this season been, knowing that it would be your last? Or have you simply enjoyed the ride with no pressure?

I’ve enjoyed it, yeah. You know, at the start of the year I was counting the days down until I retired, but with a week to go I actually thought about it and realised that it was going to be my last race, the last time I had to prepare, and I did have some emotions there. When I crossed the finish line I wasn’t sure how I’d feel whether I was going to be sad or happy, or whatever, but like I said, it was a big sigh of relief that I’d finally finished my last national race after 25 years of racing.

Looking back on your career, what were some of the highlights for you?

Definitely my two Pro Open Supercross championships, those two were big highlights, and then also in 2003 when I won every race that there was to win in the Pro Lites class. Every one of the championships out of the 12 that I’ve won all meant something, so there are just so many memories. I guess you could say I had a successful career and I enjoyed every bit of it.

A recent highlight for you must have been that when you parted ways with Yamaha in 2007, you were able to regroup as a privateer and then now build that team into the factory Kawasaki effort with Cool Air…

When it happened it was such a downer, I thought that I’d struggle to get a ride again, but Cool Air Conditioning and I started a race team and now we get to take over the factory Kawasaki team a few years later. It’s just been awesome, kind of like a blessing in disguise.

Did you ever have any aspirations to go and chase an international career either in America or Europe? Carroll and Cool Kev soak up the atmosphere in Brisbane. Image: Sport The Library.

Yeah, I did in 2003 I planned to go over to the States in 2004 but it just never happened, never did get there. In some ways I wish that I did, but in other ways I’m glad that I didn’t because I wouldn’t have the family that I have now. Out of that negative I guess there was a positive, where I’ve got my wife and three kids.

You had some great opponents over the years, but who was your greatest rival ever?

I’d probably say the hardest rider I’ve ever had to compete against in my career is Jay Marmont. He’s so strong willed and strong minded, so he was definitely the toughest guy to ride against.

Where do you see the sport, not only Super X but also the MX Nationals, heading in the next few years?

For sure, I think what’s happening now with the Super X and then MX Nationals, which will have a television package, will help the sport keep going forward. Right now I think it’s the quickest growing sport in the country. It’s really exciting for the younger kids because while we used to get paid good money, we didn’t get awesome money, so hopefully the young kids coming through can look forward to some bigger pay cheques at the years go on.

Good luck with it mate and congratulations on wrapping up your career last weekend.

Thanks a lot, mate. Appreciate it.