The King of Supercross proved he still has it with a second at the Parramatta Super X. MotoOnline.com.au spoke to him after the event. 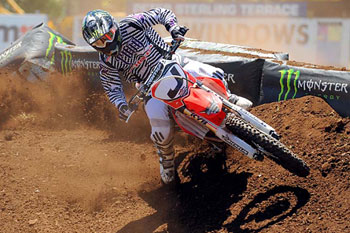 The King of Supercross impressed with second in Parramatta. Image: Sport The Library.

It was an effort that simply wasn’t expected by the retired King of Supercross, travelling down under to enjoy the racing against some of Australia’s and the world’s best.

MotoOnline.com.au caught up with MC in the Woodstock Honda Thor Racing truck directly after the night was finished, getting the inside scoop on his trip to Australia and what he thinks of the current state of the sport.

Amazing ride here in Parramatta, a podium position with second overall for the night behind Reedy. You must be happy with that?

Yeah, I’m real excited because going into these two races this year I worked a lot harder at home, and last week’s demonstration was kind of shitty if you ask me [laughs]. So, I was feeling good coming into tonight with the four-moto, six-lap Survival format, I knew it was going to be a tough night. I just kind of conserved a little in the first two rounds, did what I had to do to qualify for the next race and put it together in the last two rounds going 2-2. I’m pretty happy with it and am just feeling good that I could at least keep those guys in site. Reedy no, but realistically to keep the other Aussies in site was a pretty good job for me.

I guess the result is going to make the trip back to America that much better for you this time around. What did you think of the formats that Super X has introduced to the sport?

I think tonight’s format was good, especially because the fans knew who the winner was and who the top three were at the end of the night. Last week’s mixed format, the Triple Challenge, was tough for the fans because they have to add up all the scores, so I really liked tonight’s format. You know, it’s sort of a hobby for me now, but I’m a racer just like you, you know. When I get out there I want to show what I can do. My head tells me I can do better all the time and I put a lot of pressure on myself, so tonight was very satisfying.

You’re the test rider for American Honda, doing a lot of laps on the test track in Southern California, but when you are out there testing are you pushing hard or just going through the parts?

Well the cool thing for me is that being an older guy now and not having to train for a living, I use it to my advantage. When I’m at the track I put a lot of hard laps in just like if I was going to race, because I use it for training. For me, genetically I have to be careful that I don’t get too out of shape because it can happen real easy [laughs], so the test track has been a saviour for me. Of course it’s easier to turn the throttle off than to crack it wide open these days because I have a family and I need to be healthy when I go home on Sunday or Monday, so I just try to keep myself safe and not do anything stupid. That’s my main focus. I mean, it’s nice to have a finish like this, but I’m not going to get fired on Monday if I don’t perform, you know.

Coming over to Australia did you expect to podium? Not only do we have Reedy here, but guys like Michael Byrne, Dan Reardon and Jay Marmont have also done pretty well in the AMA.

I didn’t know what to expect, really. Last year I could hardly keep the Aussie guys like Marmont and Boydy close to me, but like I said, this year I worked a lot harder and I knew this time if I put the time in then I could be closer. I knew that after last week’s race that I could definitely get on the podium, so this weekend was a bit of redemption for me. The guys gave me a lot of respect, which was cool. I’m not a guy who is going to run another guy off the track, and of course in the last corner Jay could have hammered me and put me in the cheap seats if he wanted, but he was really respectful and I love racing guys with etiquette. It was cool.

Supercross in Australia has new promoters and has basically been transformed into a whole new sport since Global Action Sports took over last year. How does our series compare to America in your experience?

It’s refreshing because Super X is on its way up over here, kind of like what Supercross was for me when I joined it. If I could be a part in helping to build Super X in Australia then I’d be proud of that. At home it’s a little funny, even when I retired, it just got so serious. Everyone wasn’t friends anymore, the camaraderie wasn’t there. Even Chad is lightened up over here, he’s very serious when we are back at home. Super X in Australia brings back a lot of good memories, I like it a lot. 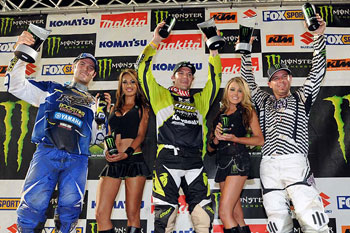 McGrath was a welcome addition to Reed and Marmont on the podium. Image: Sport The Library.

Your mum is from Australia and you seem to enjoy your time here. What have you been up to since you arrived?

Yeah, this week I was a total tourist. Thankfully Mal [Peter], Jaime [Mortimer] and everybody from Super X kept us busy. Let’s see, the first day we did the Harbour Bridge walk and it was cool to go up on top of that, and then we walked all around Sydney, checked out the Opera House, and then we got to play golf one day. By the time we did a few things the week was over, but basically I was just a tourist. I was going to try to fit in some riding with Reedy and Burner but I’m not sure that me driving over here was a great idea, so I didn’t want to get a rental car [laughs].

So you hadn’t ridden since Canberra?

Nah-uh, I rode for a few minutes on Friday, but that was it.

Just to wrap it up, Australia loves having you here and we’re a country that has a big following for Supercross, so any chance that we will see you back for Brisbane?

There’s a good chance now that Stewart’s out. I’ve told Yarrive [Konsky] and Mal that I’d do it, so it just depends on whether they get some other current big guy. I’d do it. I mean, Brisbane’s awesome and was fun last year, so now that I’m riding a little better it’d be fun for sure. Part of my heart is Australian so it would be good to be here.

Alright, cool. Thanks for your time and it would be awesome to see you come back to wrap up the season in a few weeks time.