Ready to win out of the crate, Suzuki's all-new fuel-injected 2010 model RM-Z250 motocrosser is now available in Australia. 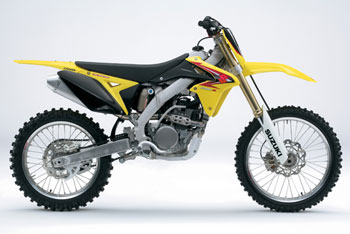 Ready to win out of the crate, Suzuki’s all-new, fuel-injected, 2010 RM-Z250 motocrosser is now available in Australia.

Developed in competition, the all-new package also features significant engine, chassis and suspension developments, and is set to add to the RM-Z250’s already impressive racing record.

The all-new, fuel-injected RM-Z250 has had a perfect racing debut in 2009 with young Australian Pro Lite star Matt Moss claiming four wins in as many rounds in the 2009 Super X Championship.

“That technology is now set to revolutionise quarter-litre racing, with the all-new, fuel-injected Suzuki RM-Z250.

“With a host of other major developments to an already-successful package, the 2010 Suzuki RM-Z250 is the ultimate, race-ready 250cc motocrosser.”

Revised cam timing and intake ports, a stronger connecting rod and a more-rigid crankshaft are among the other upgrades to the engine, which includes titanium valves, Suzuki’s Composite Electrochemical Material (SCEM) and Suzuki Advanced Sump System (SASS).

The all-new, 2010 RM-Z250 has re-designed radiator louvers to optimise cooling in competition, while a new muffler complements the enhanced engine.

Side rails are shallower with thicker lower frame tube walls, and the Suzuki’s new swingarm has a revised centre brace to increase rigidity, with a centralised mass to deliver optimum traction.

Spring and damping rates and rear linkage in the advanced suspension package have been revised to deliver razor-sharp and confidence-inspiring handling.

To celebrate the arrival of the all-new, 2010 RM-Z250, Suzuki will include a free Garmin training watch worth $469* with any RM-Z250 or RM-Z450 from its title-winning motocross range purchased before the end of the year.

For further information and pricing details on the 2010 Suzuki RM-Z250, interested customers should visit their local Suzuki dealer, who can be found through the Dealer Locator on www.suzuki.com.au.