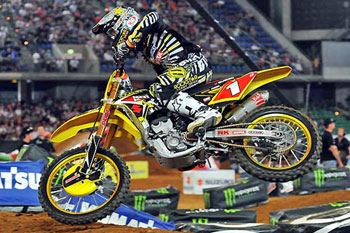 Moss will ride for Rockstar Makita Suzuki in the USA next season. Image: Sport The Library.

After wrapping up his first MX Nationals crown in the Pro Lites class during the Australian Motocross Championship earlier this season, Moss has gone on a tear in the stadiums with little left on the table after each race weekend.

Armed with Suzuki’s fuel-injected 2010 model RM-Z250, Moss has been the dominant force as he builds momentum, an upswing that will lead him to the factory Suzuki team in the Unites States for next season.

MotoOnline.com.au caught up with the determined 21-year-old following the Perth round at the Burswood Dome to get his story on the season to date and where his future currently sits.

Mossy, three rounds into Super X and all is perfect so far. How’s it been for you in Launceston, Geelong and Perth?

Launceston was great you know, I got the fuel-injected 2010 model RM-Z250 just before the event and loved it. I feel like I’m getting better at each round and the bike feels great for me. It’s been awesome to win three in a row, so hopefully we’ll keep going from here.

You made the decision to ride the 2010 fuel-injected RM-Z250 right before the season commenced. What are the advantages of the new ride?

The advantages are pretty much its traction and the way it turns, plus it’s got a lot more power than what the previous model had. It pretty much feels like a 450, but it turns better and I really like that – it’s good, for sure.

It was an intense battle at round one with American Kyle Cunningham, but since then you seemed to have gained some steam again. Have you stepped it up since Tasmania?

I don’t really think I’ve stepped it up, I just think that everybody pushes at the first round to find their limits and I think that Cunningham was on the edge at that first round. I’ve just kept doing what I do and so far it seems like it’s good enough to be able to win races.

Your laps are usually comparable with the top Pro Open riders at most rounds. Do you take that into consideration when you’re out there dominating?

Yeah, well that’s pretty much what I base myself from when I’m out front. I try to keep myself close to Chad [Reed]’s times, which gives me something to work for and if you know that you can be pretty close to his speed then you’re on the pace, so that’s what I try to do. 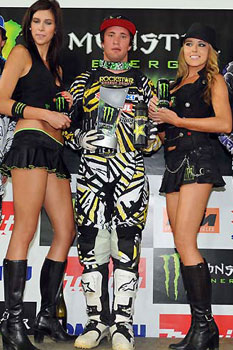 Moss has enjoyed a perfect Super X season to date in 2009. Image: Sport The Library.

For this year we’ve seen the mixed formats introduced for the Lites class in Super X, do you prefer to mix it up or would you rather the traditional 15 lap main event at all rounds?

I’m liking these races at the moment with the mixed formats, but it would be good if we were to get points toward the championship in all of the finals rather than just getting 25 points if you win the overall. It should be like the motocross where it all counts, so you could possibly walk away from a round with a lot of points for winning all of the races.

With these mixed formats, how much would you like to go up against the 450 guys on your 250?

Yeah, that would be good if we could have a race against each other. I said to the promoters that we should have a race out of the start gates between the 250s and 450s, but I’m just not sure that it will happen because you’re not allowed to race 250s against 450s here in Australia.

A tough moment in the season was the injury of your brother and Suzuki teammate Jake at the opening round, how much does that affect you seeing your bro ruled out of the season?

It doesn’t affect me too much, more that I was pretty bummed for Jake because he was on the pace and looking like he’d have a deal in America with Rockstar Makita Suzuki, so I was really bummed for him.

It’s been on the internet that you may be heading to the States fulltime with Jake next season, with reports indicating that you’ll be on the Rockstar Makita Suzuki team. Is there any truth to the speculation at this point?

Yeah, I’ll definitely be over there in the States on a Suzuki with Roger De Coster’s team, just not sure what size bike yet. But I’ll be over there racing and I’ll be in yellow next year, that’s for sure.

And Super X is the perfect preparation for AMA Supercross, so you must feel ready for the challenge, right?

Yeah at the moment it’s good, you know. There are a lot of rides opening up with people wanting too much money, so the teams are looking for cheaper riders and it’s helping us to get the opportunity to be there. It’s pretty much perfect timing for me because I’m ready to bring my A game, so it should be good.

Thanks mate, we’ll see you at Canberra on the weekend.

Alright bud, thanks a lot. See you down there.