MotoOnline.com.au speaks with Dan Reardon about Super X 2009, kicking off the season in top form for Woodstock Honda Thor Racing. 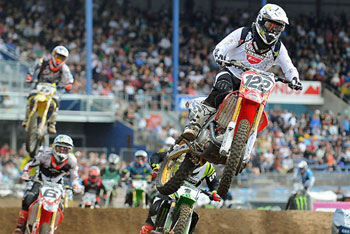 The American-based Queenslander won the opening final of the season in Launceston before a crash in the second final while leading bumped him to second on the podium, while he again won a race in Geelong last weekend on his way to second overall again.

Reardon entered the Super X season with his confidence high after a podium performance in the U.S. Open of Supercross in the weeks leading up to his domestic series, looking to prove he has what it takes to battle with Reed on home soil.

MotoOnline.com.au called up the former Australian Pro Lites and Pro Open Supercross Champion to get the inside line on what he expects in the final five rounds of the season.

Dan, congratulations on a strong start to Super X this season, how have the opening two rounds gone for you from your perspective?

The first round was good. It’s weird, you know, I brought my suspension out and a couple of engine components and stuff to make it feel like my bike, but it just didn’t feel like my bike in the first couple of practices or whatever. We got the bugs out pretty much by the second practice and then the night program went pretty good. I was happy with the way things went, unfortunately made that mistake and crashed in the second 10 lapper, but other than that I was happy with the way things went.

And then in the lead up to Geelong I kind of got sick and was off the bike, just from travelling and stuff, and come the weekend I still wasn’t well. It was more like a survival than anything – I just wanted to get through the weekend and now things are looking good, I feel a lot healthier, so I’m looking forward to Perth.

You have won races at both Launceston and Geelong, finishing second overall at both. Do you feel as though the field is closer to Reed in 2009?

Well, it’s hard to say. I’d like to think so. At the first round he obviously had bike issues setting it up and the rest of it, and then at the second round I definitely wasn’t feeling the best. I would say that we both haven’t been 100 percent ready to go, so hopefully this weekend I can continue to get good starts and keep working on what I need to work on. It would be good to have a race with Reedy, you know, maybe go back and forth a little bit, but he’s obviously a very strong rider. He’s one of the world’s best when it comes to the whoops and you could clearly see on the weekend how much confidence he has. It’s something that I’ve got to pick up my game if I want to battle with him, so I’ll do all I can on my end and like I said, I’m looking forward to Perth.

Last year saw some heavy crashes and bad luck from you in Super X, so is this year the time for you to turn that luck around on home soil?

I’d like to think so. You know, it’s tough. Last year, I just wanted to beat Chad so bad that I kinda let the general basics of riding that I’ve learnt over the years about racing itself all go out the window. I tried too hard in the wrong areas and came unstuck, had some pretty good crashes and hurt myself a little bit, and I didn’t want to spend any more time on the couch. The start of this season has been good and I had some momentum from the U.S. Open, so I just want to carry that through the entire series this year.

What makes you want to come back to race Super X after racing all year in the States?

Well, there are a couple of reasons. For one, the Supercross series has definitely picked up compared to where it was when I left – the tracks are awesome and the exposure is really good. I believe that it’s perfect preparation for the AMA in 2010, you know, there’s no better practice than racing. 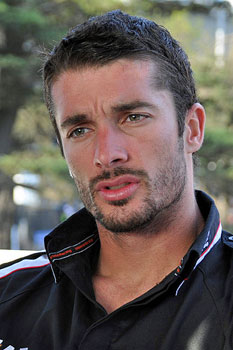 Reardon has been strong so far in Super X 2009.

Also, eventually I want to come back to Australia to race, so I feel that it’s important I show my face and I can still do it, trying to keep myself fresh in people’s minds I guess.

Career and business wise I think that it’s important for both.

Your performance in the U.S. Open of Supercross in Las Vegas earlier this month must have raised some interest over in the States, so do you know what you’ll be doing for 2010 yet?

You know what? Hopefully it did raise some interest. The U.S. Open weekend went good and I’d been on the bike for three weeks preparing for Supercross after I had my shoulder operated on, so hopefully I turned a couple of heads.

Alright Dan, well thanks for your time and good luck this weekend in Western Australia.

Yeah, thanks mate. No worries.