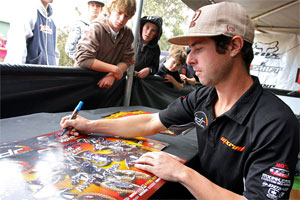 Marmont is a popular rider at Australian Supercross racing.

It’s been a quiet year for Ryan Marmont through a spate of injury and bad luck, but heading into the opening round of the 2009 Monster Energy Super X, Australasian Supercross Championship, in Tasmania this weekend, the MX RAD rider lines up as a favourite for this year’s Pro Lites crown.

Determined to reclaim the series he won in both 2006 and 2007, as well as the Supercross Nationals title in 2004, this year’s Super X series won’t be easy for Marmont, coming up against defending champion Matt Moss in an all-out battle for the number one plate.

Smooth, calculated and extremely fast on his day, Marmont will enter the series as an underdog against rectly-crowned MX Nattionals Champion Moss, but simply enjoying his racing again with MX RAD will pay big dividends for Marmont come the season’s end.

MotoOnline.com.au spoke with the man they call Doggie for a quick chat to see how his pre-season testing schedule has been going.

Doggie, how’s the pre-season for Super X been going for you so far – ready to roll for round one in Tassie this weekend?

Yeah, it’s been going good. We’ve been riding flat out on the new bike, I haven’t ridden anything but a KTM on a Supercross track before, so everything seems to be on track and all is going well.

You enter the series as somewhat of an underdog despite being a three-time Supercross champ in the Pro Lites class. How confident are you heading into this year’s series?

You know, this year I haven’t done much so far results wise, because in Motocross I had a few niggling injuries after breaking my hand at the opening round. So I’m looking forward to going into this year’s series with no injuries at all, hopefully I’ll give ’em heaps and I think I have a good chance at doing well and taking it out. The smartest rider will win, but you need to have good speed too, and I feel that we should be on the pace.

Last year saw you finish third in the Super X series with KTM, but for this year you’re Yamaha-mounted with MX RAD. How has the transition to the new team been?

The transition’s been great actually, they can’t do enough for me. They want the championship as bad as I do, and we want to give it a really good shot, being a new team. They’ve got some good plans for the future as well, so I think that if we can get a Pro Lites championship under our belt in the first year then it will show everyone how hard we’ve been trying and what we deserve.

And you guys have decided to stick with the 2009 model YZ250F for the season?

Yeah, we’re sticking with the ’09 since we’re changing manufacturers for next season, so we need to use up as many parts as we can. We’ll stay on these bikes, keep developing them like we have all year, and I’m really happy with them. 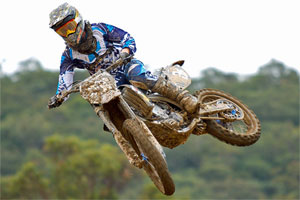 Doggie has had a good pre-season for Super X 2009.

The Marmont test track had to be knocked down earlier this year after many years in operation, so how have both yourself and big bro Jay been preparing for the season?

Luckily enough, a guy by the name of Jim Godfrey put his hand up and let us build a track on his property, so without the help of guys like that we wouldn’t have been able to keep doing what we do, as well as we’ve been going. It’s good to see that people are out there supporting us, and we have a track to help us heaps, which is really good after we thought we’d be stuck at one point there.

It must be pretty good to have an older brother in the Pro Open class to gauge your speed off, but how closely do you guys work with each other away from the races?

It’s been good with Jay because he’s been on the Yamaha for two years now and he knows how to set it up really well. He really saved me a lot of headaches by having the answers to a lot of questions, and he helps me out on the track with things that he can see I’m doing wrong, and vice versa. He has a lot of knowledge in the sport, and I think that he’s going to be a big threat this year as well.

To wrap it up, let’s speak about the MX Nationals series quickly. How was the outdoor series for you overall after breaking your hand at the first round?

Yeah, it was a shame that I did that at the first round because I really felt that I’d trained hard and it was a new start for me. Unfortunately it didn’t go to plan for me, but that’s motor racing. I tried to get back on the bike as soon as I could and I got the last couple of rounds in, but my fitness wasn’t quite there to keep the intensity up. I’ve put my head down for this series and it’s the one that means a lot to me, and to a lot of people, so I’ll be trying hard to put the thing up front.

Well good luck this year and hopefully we’ll catch up for a post-race victory chat during the season!