MotoOnline.com.au catches up with Australian Motocross front runner Cody Mackie to get the scoop on his impressive rookie Pro Open season. 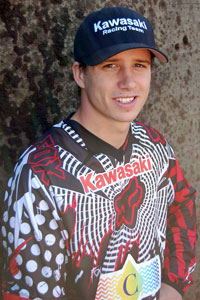 After a horror run of injuries last year that saw him sit out much of the 2008 MX Nationals and Super X seasons, Troy Carroll Cool Air Kawasaki’s Cody Mackie made the step up to the 450 class in this year’s MX Nationals and had an impressive debut season against his more seasoned competitors.

With Super X only weeks away when it kicks off on 17 October in Tasmania, MotoONline.com.au got in touch with Mackie to get his thoughts on the season so far, Super X, and to find out what it’s like to ride and practice with James Stewart.

You had a pretty impressive debut outdoor season in the premier class and showed from round one that you were ready to mix it with the more seasoned 450 guys. What were your goals coming into the series and, looking back on it, how do you feel about your performance?

Definitely coming into the season my goal was to finish top five and I put in a lot of effort to get that result. At the first round I finished fourth, and only missed the podium by one or two points, so I was happy. Second round I ran fourth again and almost won a race, so I knew it definitely hadn’t been a fluke.

I followed up in the next few rounds with some equal thirds and fourths, so after those results I re-evaluated and realised I definitely wanted to be on the box in the championship. A few mistakes toward the end of the series kind of hurt that goal a bit, but all in all I was happy with my performance and to still be challenging for that podium spot in the last round wasn’t too bad, I thought.

You suffered two consecutive broken femurs within months of each other last year, resulting in a great deal of time off the bike. After this some people may have been doubting how strongly you could come back, especially jumping up to the bigger bike. During those tougher times did you ever doubt yourself?

When I did it the second time I definitely doubted myself. I was looking at my life and the amount of effort I had been putting in, and to break it the first time I felt I was just a bit unlucky, but to put in such a huge amount of effort to bounce back and then break it again, same track, same everything, was devastating.

It was probably harder to come back mentally rather than physically, I mean there are definitely people out there who have had to deal with harder things and probably deal with it better than I do also, but it’s a pretty bad bone to break and it was definitely mentally hard. In the end I weighed everything up, and no, I didn’t doubt myself in the long run. I thought, I’ve come too far, this has been my dream to do this ever since I was a little kid.

It’s something that could have broken a lot of riders, so it must be a great feeling to prove your worth against the big boys after all that time off.

Oh for sure, you look at the amount of people who have dropped out of the sport over the years, some who were more talented than myself, and I guess some people don’t have the mental strength to push through those things.

Moving from the Factory Kawasaki team to the Troy Carroll Cool Air Kawasaki Racing squad, what have been the major differences? From a bystander’s point of view it seems that the formula is proving to be a success.

Nothing really, when I got on the team they were 100% behind me, anything I wanted or needed they have helped me out with. Obviously the budget is a little bit different, but I believe I have the best bikes out there and it definitely wasn’t as hard as what I thought it would be. It’s been really good. 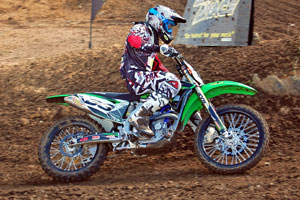 With the outdoor season done and dusted, have you started testing and training for the 2009 Super X season?

Definitely, I’ve been training pretty hard actually. Not so much physically, but I’ve been on the bike a lot getting my eye in. I haven’t actually raced Supercross in Australia since 2006, so it’s been a while and I’m looking forward to it.

With Chad Reed lining up again for the series and appearances from international stars such as James Stewart adding to the already strong domestic line up, what are your thoughts on the series and have you set many goals for yourself?

My goals are changing every week and I think it might be a little too early to say right now, as we’re still just under seven weeks out. To set a goal now is a little premature I believe. I’ll re-evaluate things as it gets to a closer date, but if I keep going the way I’m going, I definitely can’t see a reason why I couldn’t finish where I did in motocross, if not better.

Speaking of James Stewart, you rode and trained with him a couple of years back. You proceeded to perform well in the U.S. at the first Anaheim race that year, only to be halted by a thumb injury at the very next round. Are you looking to get back over there in the near future?

For sure, it was an awesome experience that I had with James Stewart – once in a lifetime really. In saying that, I have spoken to him since, very recently actually, and he’s more than happy to have me back. So when it happens I’ll have to make it happen and talk to him, but to be racing him at the Brisbane Super X round will be crazy. As for future plans to get back there, for sure, the economy isn’t going so great over there and even here it’s suffering a little bit, but hopefully it will pick up soon in the next year or two and I’ll still be young enough to get over there to pursue my dream of racing in America.

Any people out there who you would like to give a shout out to?

Oh yeah the list is crazy. Definitely the guys from my team this year, Troy Carrol Cool Air Kawasaki Racing, and the team sponsors. Ogio have been amazing, Scott goggles, and my family for supporting me from day one – they’ve never given up on me.

Good luck for Super X mate, I am sure we will be seeing plenty of the number 33 at the pointy end of the field.