MotoOnline.com.au speaks to CDR Rockstar Yamaha’s Craig Dack about his team’s in-house battle for the Pro Open title heading into the final MX Nationals round this Sunday. This weekend will see the 2009 MX Nationals Australian Motocross Champion crowned, with a head-to-head battle set to go ahead between CDR Rockstar Yamaha teammates Jay Marmont and Cheyne Boyd at Coolum in Queensland on Sunday.

Defending champion Marmont holds a 14 point gap over Boyd in the series, but with a three moto format for the weekend the title could be either of the two dominant riders’ to take home as there is 75 points still up for grabs.

Either way, Craig Dack and his team are very much likely to be crowned as they’ve almost got an unassailable lead in the series, putting Dack in the box seat to take out yet another crown.

MotoOnline.com.au speaks to team owner Dack about the final round of this year’s series and what it’s like to be the head man of the most dominant team in Australian motocross.

Firstly Dacka, your CDR Rockstar Yamaha team has all but wrapped up the Pro Open class of the MX Nationals this year. You must be satisfied with the year you’ve had to date?

Yeah, we all know that the most important part of your team that you have is the riders, and at the moment there’s no doubt in my mind that we’ve got the two best riders in Australia riding for us. So to have that has been fantastic, and also to have both Jay and Cheyne fighting so closely and intensely throughout the championship while still retaining a good atmosphere has been great – it just works. We’ve had a fantastic year so far.

All eyes will be on Jay and Boydy this Sunday at Coolum with just 14 points separating them into the final round. How do you handle that scenario as the team owner?

Basically now that we’ve done all the hard work leading up to this round, I mean we all know that racing can bring up many surprises, but at this point we are pretty certain that CDR is going to win the championship.

So as far as that goes I’m professionally happy that we are going to win another championship, but the hard thing is that it’s a bittersweet thing because I have a lot of respect for both riders as racers and personally – I’m really fond of them, they are truly good guys. I just know that Sunday afternoon one of those guys will be disappointed, and that’s the difficult thing for me.

Can you explain to us the feeling you get when both of your riders are so dominant. Does it make a difference to you who wins, or as long as it’s a CDR Rockstar Yamaha you’re happy?

Well, as I said, it’s a funny one because how I feel right now is that Cheyne Boyd is one of the hardest working riders on the track and he puts 100 percent into what he does and has been the bridesmaid so many times. From those points of view it would be really nice to see Cheyne win the championship.

But on the other side of that, after being in the position myself before, Jay Marmont is defending his championship and to win it again would be a treat for me. Plus Jay has had a really difficulty year with his new daughter being very, very ill, and he’s had a difficult time throughout the past few months and I’ve been there the whole way, seeing what he’s been going through. So from that point it would be a nice twist for Jay to win the title again.

It kind of balances out equally between the two riders, and for me it’s not about who wins the championship, it’s about who loses it – who doesn’t win it. I’ll be feeling for them at the time.

It must be enormously satisfying watching your bikes battle for the lead every weekend, though. Just how much effort goes into building a team to this level and how much pressure is on you to ensure all things are equal?

We take super care of developing the bikes, gaining horsepower and getting the suspension working, but we also put an equal amount of time into making sure that we retain the reliability of the bikes. We focus so much on studying every track for every race regarding what the conditions are going to be like, so we’re not going to have any failures.

That’s one of the key things for CDR, we hate failures, and we haven’t had any so far through the championship, touch wood. You’ll see other teams have had failures mechanically and also with crashes, so there’s been fault from their teams and it’s all about those one percenters that makes a team bond.

I think that’s what we’re clever about, making sure we leave no stone unturned and we jump through hoops for the riders. If Jay, who is based in Sydney and we are in Melbourne, if he has a problem with his practice bike we have a mechanic up on the plane that same day to make sure he can get back to training. It just works at the moment, we’re making sure that everybody is pulling in the same direction. 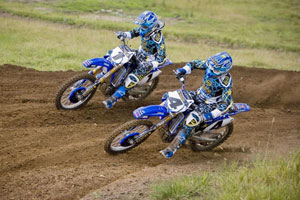 You’ve been a mainstay in Australian motocross for over 20 years, so what is your take on this year’s series with the unique formats where some rounds are traditional 30 minute motos while others are sprint races?

I think that it’s been great. It shows that the cream always rises to the top and that the best guys will be on top no matter what format we run, and we always have to remember that this stuff has to be tailor made for the public.

As far as the series goes I’ve been very positive on it and it’s been a really smart move that’s made for some exciting racing. As far as running a race team goes, this year will go down as one of the best years just because of the way everything is working.

Jay and Boydy had a great race at Newcastle on Sunday, and with the gap we’ve got to our competitors in the championship, I told the mechanics over the headsets just to step back and enjoy it. Just to watch these boys go at it.

We had another good race at Perth in the sand, and I said it to all of the mechanics there too, just sit back and enjoy this because these times don’t come around very often. We’re in one of those unique times with CDR that don’t come around two many times in your career.

With WEM doing a great job with the MX Nationals and Super X taking the sport to new levels outside the industry, do you believe that the sport is finally on its way to becoming more mainstream?

It seems to be, doesn’t it? Super X is making a big go towards mainstream and Kevin Williams always has his thinking cap on, working as hard as he can to make motocross better.

Motocross has always been the poor side of the sport while Supercross has been the glamour, but at the moment I think that the sport is experiencing more popularity and notoriety than we ever have.

As you said, we are breaking into the mainstream, but at the same time we are all fighting a recession and there have been budget cuts, everybody is tightening up, so we all have to work a little bit harder for a little bit less at the moment – that’s the challenge in front of us.

When you began running your team back in 1993, did you ever picture the sport raising to the level that it’s at today?

I’m an optimist and I always hope that we can play a part in helping the sport to grow, and try to help it get to the next level. I never had any expectations, but it’s always been something that I’ve worked hard to try to achieve.

Hopefully at the end of the day, whenever that may be because there’s no plan on that, but you hope that you’ve left a positive impact on the sport so in years to come you can sit back and realise that you were part of helping the sport get to another level.

You certainly have helped raise the level already. Well thanks for your time and good luck for this weekend and congratulations on your success so far this season.