American Josh Hansen will make his Australian Motocross debut with Woodstock Honda this weekend. MotoOnline.com.au gets his thoughts before the action. 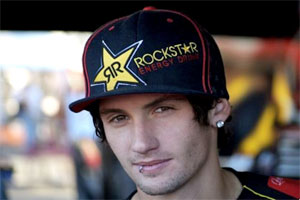 America has long been known as the pinnacle for Motocross and Supercross racing, but with professional factory teams and high profile series gaining momentum Australia is quickly becoming a popular destination for international stars.

The latest U.S. rider to make the trek down under is former factory KTM and Yamaha rider Josh Hansen, who has spent recent AMA Supercross and Motocross seasons on the Joe Gibbs Yamaha and Hart and Huntington Honda teams.

After securing equal first in the 2005 East Coast Regional Supercross title but losing on a count back to Grant Langston, Hansen has struggled to put a full season together since due to various reasons including injuries.

Hansen proved that he still has the speed and talent at last year’s X Games in Los Angeles by scoring an upset victory for Troy Lee Designs Honda, making his mark in front of many top riders in an event aired on international live television.

Despite his set-backs he’s still focussed on reigniting his fulltime career, setting his eyes on Australian racing for the remaining MX Nationals rounds with Woodstock Honda Thor Racing before possibly contesting the entire Super X series at the end of the year.

Hansen is also using the nationals as a training ground for his X Games title defence, once again aiming to take the sport’s ultimate one-off event in front of the action sports fraternity. With the support and guidance of Woodstock Honda boss Yarrive Konsky, Hansen may just rise to the occasion while out here down under.

MotoOnline.com.au spoke to the 25-year-old on arrival into Australia, getting his thoughts on what he expects in the latest chapter of his rollercoaster professional motocross career.

Welcome to Australia, Hanny. You must be excited to land a factory ride down here with Honda?

Yeah, definitely. I got a call from Yarrive after being low key for a while, I had some people pass away on me and kinda went down the wrong path, I basically just had to step away for a few months and I haven’t been doing anything other than putting the pieces of the puzzle back together with my personal issues.

But yeah, I had actually just gotten a bike from Sunny Garcia back home, he lent me a bike, and then I got a call from Yarrive who gave me the opportunity to come out here.

You know, it’s kinda hard to come out in the middle of the nationals season when everybody’s in shape and have been riding, and I haven’t ridden nationals in a few years.

I’ve been off the bike for a few months but I’m getting ready for the X Games and the nationals will be a good way to train, be a good way to do some 30-minute motos, and I didn’t want to pass up the opportunity of coming to Australia.

You were part of Carey Hart’s Hart and Huntington team in the States for AMA Supercross this year, but left the team near the end of the season. What have you been up to since then?

I haven’t ridden at all. I’ve probably got about three days of riding under my belt before going into this next round, so it’s been a few months since I’ve really ridden much. I’m totally out of shape, but I guess it’s good publicity and I’m here to fill a spot.

Yarrive has been following my career and knows my background, so he really thinks that he can help me and turn me around. I’m trying to get my life straight and I want to win a Supercross championship – that’s my main focus.

I want to ride myself back into shape in the outdoors for the things that really mean the most.

One thing that’s interesting is that you’ve always been known for your Supercross ability, but you’ll be starting off in the outdoors over here. What are your thoughts on that?

Yeah, I think it will be cool. Obviously I’m not going to be happy when my tongue’s dragging on the ground and I’m tired as hell, but yeah it’s just a good environment and I’m happy to be here.

I’m getting tired of the same picture back in the States. I’ve had too many issues so it’s good to be away and start new, and it just seems like the community out here is a lot more laid back about life. It’s not about having the best this, or the best that.

Living in Los Angeles it’s kind of easy to take the wrong turn, so it’s a good opportunity to be here. I’m excited, for sure.

Do you know much about Aussie racing? How do you think you’ll stack up against the likes of Jay Marmont and co?

I know that those guys are fast. Guys like Marmont and Craig Anderson were fast when they came to the States, but I’m sure they’ll be even faster on their home soil. This is home for them.

You know, it’s a bit awkward for me to come over here and adapt to the lifestyle as I’m sure it was for them, but the guys are fast and they’ve been racing. I know they’re fast and I’m not downplaying anybody.

I went out riding with Cheyne Boyd for a couple of days and that guy’s fast too. These guys are in shape and have been racing so I’m going in with an open mind.

I’m not in shape yet, but I’m going to be in shape. I haven’t really done any testing and I don’t have the bike exactly where I want it, but I think for that last outdoor race after the break that I can do before X Games I’ll have more time on the bike, have it more dialled in, and have my fitness up.

I do believe that my speed has always been pretty good in outdoors even in the States but I’ve just been known to be a lazy ass and that’s why I have never done outdoors.

I’m basically trying to get out of my comfort zone to make a name for myself.

Are these last few MX Nationals rounds sort of a test for you to see if you’ll be staying for Super X, or is that already a done deal?

I’m going to do Supercross here, I’m almost positive on that. I’ve been talking to Yarrive and a few other people, so I’m about 95 percent sure that I’ll be coming back out here for the Supercross.

That’s something that hopefully I’d love to win the title, or at least give everybody a run for their money, and I think to always be racing is the best practice. There’s nothing better than racing, so that’s why I’m doing this.

It’s easy back at home to ride in your comfort zone and practice all week within the comfort zone, and that’s something that I’ve always struggled to do back home, is getting out of that zone. So that’s what I’m doing. With our Super X series here featuring American-style tracks and also Chad Reed, do you know of any other American riders who are going to come out?

I haven’t really heard. I’m sure there will be. I think a lot of guys have seen it over the internet and the tracks were built pretty good over here, so I’m thinking more people will be coming out.

I actually heard that [Grant] Langston might come, he isn’t American but races in our series, and I had also heard that maybe [Jason] Lawrence, but I don’t really know. I’m just using it for practice to get ready for the AMA and I think that everyone else thinks the same.

Hopefully a few of the guys come out – we could make the series a little bigger and make it worthwhile for everyone I hope.

Just finally, how have you enjoyed Australia so far? Have you had much time with the team to acclimatise before South Australia’s racing this weekend?

Ah, it’s been hard. I did a 15 hour flight direct from LAX and then I landed and got right on the bike. I got kinda sick, and to be honest today is the first day I’ve really felt alright since I got here.

I don’t know, it’s just a lot different. I’m kinda off my normal time schedule, but it’s all good, the MotoGP guys have to do it every weekend so I can’t be a pussy I just need to go ahead and get on with it.

Well good luck, and make the most of it. We’ll be cheering for you hoping you can put it all together out here.

Cool man, I want to see everybody I can while I’m out here and have some fun, for sure.