CDR Rockstar Yamaha’s Cheyne Boyd took a double victory last weekend, leading a Yamaha podium sweep in the MX Nationals. We catch up with him to get the rundown on his season to date. 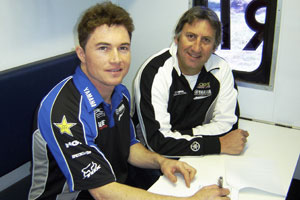 CDR Rockstar Yamaha rider Cheyne Boyd won the fourth round of the Australian MX Nationals in convincing fashion at Mackay in North Queensland on Sunday, leading a Yamaha podium sweep ahead of teammate Jay Marmont and MXRAD rider Andrew McFarlane.

Boyd won the round just one week after finishing third behind Marmont and McFarlane at Towoomba in Queensland, setting up a three-way fight for the title as we reach the halfway point.

MotoOnline.com.au caught up with the Victorian late on Thursday afternoon.

Last weekend in Mackay you won both races in the pair of 30-minute motos format that was run for the round. That must be satisfying for you at the mid-point of the season…

Yeah, it was, especially with the start of the season that I’ve had with those different formats. I would call it bad luck, leading a fair few of the motos and crashing, so that was a little demoralising because I knew I had the speed but every time I was leading it wasn’t like I was out of control or lacking fitness or anything, it was just silly little mistakes that were costing me so much.

The weekend was good, you know. Toowoomba was a confidence booster as far as I didn’t have a big crash and just to get on the podium was good. So to go to Mackay and do what I did was just weight off of my shoulders because I knew that I could do it.

I’ve had so many opportunities, it’s not like I hadn’t been near the front, so just to get out there and finally do it and to pass all the top guys without a problem it was good for my confidence. It was a good day.

You said in the post race PR that you have taken a while to get going this year. Why do you think that is? How can you get going faster and more consistent from the start?

I’m not sure. Well last year I had a lot of injuries going into the season and I’d had shoulder and knee surgery so I was nervous about that and it did take me a while to get going.

Once you have a few good rides and get those breakthrough wins then the confidence comes and you just do it, but this year I’d had my best off-season and the one thing I do regret is not getting enough race practice.

Other than that, this year has been the best year I’ve had coming into the season because I’ve been healthy – it’s just sucked that I’ve had these few bad motos that have cost me in the points because I’m sure I could be right there after the weekend.

The way I felt on the weekend at Mackay was the way that I felt at Albury. I was fastest in practice there and I was fastest at Canberra in qualifying, you know, so hopefully one of these years I get it right and don’t have to play catch-up.

I guess that’s just the way it is and I’m not going to sit around and sook about it. I think if I did that then I wouldn’t have done what I did at Mackay. You’ve just gotta take each blow as it comes and deal with it. It’s just how good you come back from those things. 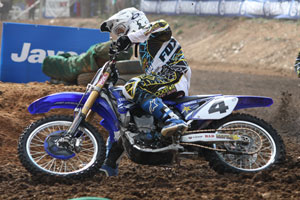 Boydy is a fan of the faster tracks on the calendar - and the 30-minute motos!

The Gum Valley track up in North Queensland looked like an awesome layout with good dirt. What was it about that place that made you able to perform at your best like you did?

Well I think that one good thing was having the thirty minute motos again, and that surface was good too. The track was wider and a lot of the first rounds I just hate going to them, but it’s just the way it is – we’ve been racing mini bike tracks.

You wouldn’t call Toowoomba a mini bike track but the straights are fairly narrow, whereas Canberra and Albury are just junior tracks. When we finally get to a track like Mackay that is nice and big, open and wide, where you can finally carry a lot of speed around it is what suits me.

The softer dirt at Mackay was good and got whooped out a bit, but they still had harder, tighter, clay corners as well, and it got rutted as well. The weekend was more of a motocross track, sp to pin it around there for 30 minutes you have to be fit and I guess I’m willing to dig deep on that sort of track.

With four rounds to go you have a 42 point gap up to teammate Jay Marmont – is that a realistic gap to close for you if you’re to make a real charge at this championship?

Yeah, I think so. Anything is possible and we still have a lot of motos to go and a lot of points. I don’t wish anything mad upon Jay, but if I can just keep doing what I can do on the day and try to go out and win every moto.

I think it’s possible to catch up considering last year what I did at Coolum, Murray Bridge, and what I did at Perth besides running out of fuel, so that kind of shows that the tracks do suit me a lot and I hope to make up as many points as I can.

To give someone like Jay a gap like that is not good, but I made six points up on Jay and 14 points up on McFarlane, so with the a lot of motos to go I do have a lot of chances to make points up.

For sure, I think it’s possible to take this thing out.

What’s the mood like in the truck when you and your teammate go 1-2? Pretty good or do you have a rivalry there with Jay?

Nah, not at all. I mean, obviously we keep to ourselves to a point, but Jay and I have been teammates before and we’re good friends outside of racing as well – we’ve hung out a lot. I’m good friends with his family as well with Doggy [Jay’s brother Ryan] and his parents, so we both support each other. 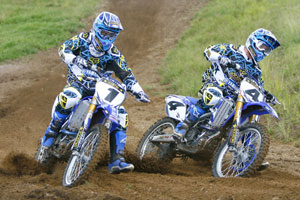 We help each other on the track. Not so much about racing but after each moto we talk about where he was good and where I was good, so it just works really well. He’s a good guy and we both get a lot so it just makes it all better on race day.

Finally Boydy, what are your thoughts on the series so far this year that WEM has put together with the round formats?

Look, I’m a massive fan of the traditional 30-minute motos, but I understand why they have done it for the crowd, but I don’t really agree with it, especially when we go to the small tracks like Albury and Canberra. I guess the 20-minute motos aren’t too bad, but we’re racing for an Australian title.

One of the reasons I hear that Kevin Williams did change the format was to help the guy who doesn’t get a chance to ride and train all the time, to give him a chance to try to race further up the field. To me it’s that guy’s problem, because we get paid to train and ride and to be the best that we can be.

I think to level out the field like that isn’t the way to do it, because it comes down to our necks and our lives, you know, we could get seriously hurt doing it. I think when you start to play around with these short and fast races then people can get up there who wouldn’t usually be up there.

I just don’t like them. With the four 15-minute motos back-to-back that’s four starts and four first laps, and when you’ve got forty guys – you yourself know as a racer – guys are everywhere.

You can still have some great races with 30-minute motos, so I think if something’s not broken then there’s no need to fix it. The U.S. is still doing the traditional motos and so is Europe, so I don’t see why we need to be the ones to change it.

So not a big fan of it then?

Thanks and good luck for the rest of the season mate…