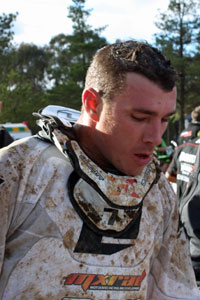 McFarlane in between motos at Canberra

This year’s Australian Motocross Championship series has a great mixture of youth and experience, with young gun Todd Waters claiming the opening round of the championship before experienced international star Andrew McFarlane fought back to claim his first victory of the season at round two in Canberra on the weekend.

McFarlane has returned to Australia for a fulltime assault on the 2009 championship, joining the all-new MXRAD Yamaha team run by Jay and Derek Rynenburg along with MXRAD founder Brendan Radford.

It’s been a solid start for the Queenslander with a third in round one and a win in round two, now sitting 13 points in arrears of defending MX Nationals Champion Jay Marmont.

MotoOnline.com.au caught up with the former MX2 Motocross World Championship runner-up and multiple times Australian champion to get his rundown on the season so far.

Congratulations on the MX Nationals victory in Canberra on the weekend, how is it competing in Australia full time once again?

It’s good, you know, I feel really good so far.  The team – MXRAD, JDR Motorsports – they’re doing a really good job and are obviously new on the motocross scene here in Australia and they’ve really stepped it up.

They’ve got a new work shop, good mechanics – I’ve got Ben Tompsett as my mechanic – who are doing a good job, so to be on the box for the first two rounds has been really cool, you know.

Has the start of the season been up to your expectations?

Is the competition about where you expected it?

Yeah, it is. It’s never easy no matter where you go. Everybody suggests things and predicts things, but at the end of the day it is what it is on the day of the race and I just try to prepare myself as best that I possibly can and try to cover all the bases from the intensity side of things for speed on the first five laps, and endurance, all that stuff. I think I’ve done my homework pretty good and as the season rolls on I’m only going to get stronger from here on in.

Moto three on Sunday was a thriller. Was it as exciting to be in the race as it was from the sidelines?

It was actually. Ford Dale was riding good and he’s a guy who’s got a lot of raw speed but not too much knowledge or experience, but he was riding really well. And obviously Cody Mackie was probably the biggest surprise and I didn’t realise that he was right there. I just kept my head down and felt strong, and ended up coming through and getting the win.

WEM has been experimenting with some new formats this year. What are your thoughts on the four 15 minute motos that were run in succession on the weekend?

With a new team that hasn’t been around the sport for a long period of time, just trying to get everything ready in the pre-season and then to be hit with a format like that in the second round was pretty nerve wracking not knowing the unexpected.

There were a lot of possibilities of being down on the ground with four starts and four first turns. 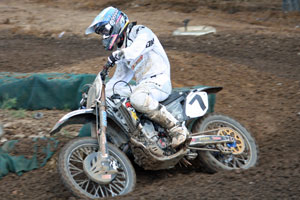 Sharky is aiming for his third Australian Motocross Championship

But as a team – the rider, manager and owner – we sat down and had a pretty good discussion of what was going to happen and how we were going to attack it and it went pretty well to plan.

We all got the job done and I think it all worked out really well. There was great racing all weekend and it was exciting and fun for us. I think a guy like myself who did my homework correctly it paid off in a format like that.

Do you consider yourself more of a sprint type of rider for short motos or do you prefer to use your fitness in the longer 30 minute motos? Or was the weekend a combination of both?

I think it was mostly a combination of both. I think a lot of people probably didn’t have their money on me for last weekend, being an older guy. People know me as kind of the guy that really comes on strong in the last 10 minutes of a longer moto, but I proved a lot of people wrong that thought my days were done after three bad years in the States.

But like I said, I did my homework and covered all my bases and the weekend went well. I was a little nervous coming into those short motos but as it panned out I put my head down and it worked out. It showed that in short, long, or whatever races, I’m going to be there for the whole series.

Australian motocross has obviously grown since you last competed here. How does it stack up to your experience in the World and American championships?

Every country’s different and they have different outlooks and positives or negatives, but I think overall there is still similarities here of back when I raced here in 2000. The profile of racing and the industry has lifted, and that’s obviously a good thing for the sport and for the younger guys who are coming through.

Obviously Super X is doing a big thing for our sport and I think that WEM has lifted the motocross series more than I expected, and I think that these formats are going to be both fun and exciting for everyone.

Kevin Williams [from WEM] has obviously laid down the law of how the tracks need to be prepared and maintained and stuff, which has definitely made good racing. It’s definitely a lot more fun riding these tracks than bone hard tracks that are dry and dusty – they’re prepared, they’re watered, they’re ripped.

On the weekend there were four or five lines in the turns, and that’s what racing is all about. The tracks need to get bumpy, they need to get rough, and you need to be able to choose different lines.

It’s a credit to Kevin because he’s been around long enough to know what it takes to make a good motocross series and he’s doing a good job. I’m enjoying it. It makes it all the better for returning home to race, and at the end of the day I’m having fun, so that’s what’s really important.

You’ve sort of renewed battle with the likes of Craig Anderson and Cameron Taylor again on local soil, but do these new breed of kids like Todd Waters and Ford Dale surprise you with their speed?

Not really. You know, it’s different to see new riders up there, for sure. They’re young guys and you expect that with not too much experience or knowledge that they’ll have raw speed by just twisting the throttle and pinning it.

There will always be those kind of guys around, but I mean, sure Toddy Waters is a guy who uses his head and is very naturally talented, but for the likes of some of the other guys they’ve still got a lot to learn.

But I think we’ve got a good series here, for sure. Especially with the way that the series is run here, it’s still a good stepping stone to get to Europe or to the States, so it’s good. 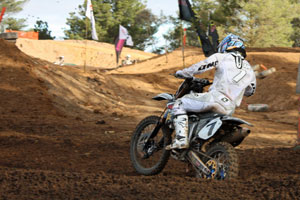 Jay Marmont is the defending champion and was basically the man last year. Do you see him as your toughest championship rival at this stage?

I do, yeah. I think that he will be the one who will be there every round and he will fight from start to finish – I think he’s probably one of the next fittest guys.

And then there are a few other guys like Waters, Dale and Cheyne Boyd who have all got good speed. I think that any one of them would have a possible chance of winning a moto, and then we’ll have to step it up to protect that number one position.

Alright Sharky, thanks for your time and good luck for the remainder of the season.