CDR Rockstar Yamaha’s Jay Marmont will begin his MX Nationals title defence this weekend, and MotoOnline.com.au gets the inside line on his preparations. 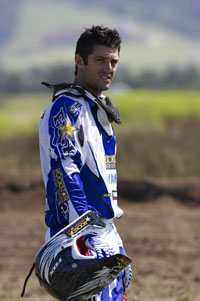 CDR Rockstar Yamaha’s Jay Marmont heads into the Australian MX Nationals as the defending champion, looking to make the first strike in season 2009 as the series kicks off this weekend in Albury Wodonga, VIC.

Last year was one of the most successful seasons yet in Marmont’s glistening career, adding the Pro Open outdoor Motocross crown to his pair of Supercross championships that he won back in 2003-04.

Marmont’s 2008 Super X season was another solid campaign as he finished second behind AMA/World Supercross Champion Chad Reed, effectively making him best of the domestic riders once again in what was his debut season at Yamaha.

But this year he is looking for more, hoping to double up on his outdoor title and to also take it to Reed in the stadiums later on in the year when Super X kicks off. All of this will be in preparation for what he hopes will be a return to the USA in 2010, desperate to get one more chance at the big time following an injury riddled attempt in 2005-06.

For now though, Marmont has his sights set on this weekend, and MotoOnline.com.au caught up with the 25-year-old to find out how his preparations have been so far.

You won the Pro Open MX Nationals Championship and finished second to Chad Reed in Super X last year, how could you possibly improve upon that in season 2009?

I think this year is going to be even tougher than last year coming off winning a championship. There are a few people in it this year that weren’t there last year, like Andrew McFarlane coming back to Australia, who has won many Australian championships. And then you’ve got Craig Anderson, who has swapped teams and he’ll be gunning for a championship.

Plus you’ve got two guys who I think are going to be my biggest competition for the championship – Boydy [Cheyne Boyd] and Todd Waters. Both of those guys have been in good form lately so it’s going to be tough for the motocross title this year, but I think the key will be to be consistent and to see what happens again.

You’ve run the number one plate in Supercross a few years ago and handled that well, but this year will be your first time with number one in the outdoors, are you feeling any more pressure at this stage?

Whenever you put number one on your back it’s always a target, but you know, I won the championship so to put it on and run it you’ve gotta run it proud. It’s good for the crowd to know who the defending champion is and it always makes you lift that little bit more and brings out the best in you as a rider. I didn’t really think anything of it until the team put it on for me, but then it made me step up a little bit more because I know that everyone’s out there to get that plate. Once you’ve got it then you don’t want to lose it.

How has testing and training been going over the off-season?

Yeah, testing has been going good. The CDR Rockstar Yamaha team came up here to Wollongong and we did five days testing, got a bunch of new parts and we are sticking with the Öhlins suspension this year. We have some new settings from Europe so that should be really good for the motocross season. We are just working on a few different bike parts, but the Yamaha is such a good bike that there’s not too much new stuff that we really needed to do to it from last year.

My preparation with my fitness and everything has been good. I’m still training with my long time trainer Scotty Williams, and he’s been helping me out a bunch so everything’s good to go. 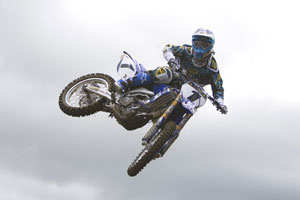 Marmont has had a strong pre-season for 2009

Like we said, you had a great season last year, but has there been any changes going into this year that will help you improve further?

Basically this year for the motocross I know that the pace is going to be higher, you know, Boydy was coming on strong at the end of last year and there were a few other riders stepping it up. So for this year if you don’t get on the bandwagon at the start because of the different formats that we’ve got then I think you could definitely lose touch for the series.

What do you think of the new formats introduced in the outdoors for this year?

I think that the three 20 minute motos at the first round is definitely the way to go, because even though I love the two 30 minute motos, they are even boring for me as a rider. So I think the three race format is the way to go because it’s three starts and three lots of points, which is basically more exciting for the fans. There can be a different winner in each moto, but the overall could go to somebody totally different.

As for the four 15 minute motos back to back at round two, I see them as both good and bad because we have a lot of privateers who come and race. For them last couple of 15 minute motos it could be a bit touch and go as riders start getting fatigued, so I don’t really know how that format will work out. But overall I’m up for changing it up and seeing how it goes – I think it will make it exciting.

As far as Super X goes later on in the season, you were basically the best person behind Reed last year, is it a goal of yours to try step up and challenge him this year?

Yeah, you know, I was disappointed the way that I started off in Super X last year. At the start I thought that Dan Reardon was flying and obviously Reedy was flying, but I think that it took us regular Aussie riders too long to step it up and realise that they probably weren’t going as fast as we thought.

Looking back on the series now, Chad came out at the start and wasn’t as quick as he was at the end, but everybody was battling with him more at the end. I think everybody knows what to expect now, and for me as a racer I’m going to know how to set up the Yamaha better coming into this year’s Supercross season. I’m going to try not to lose touch with Chad.

You sit back every weekend and watch the races in America, and even though some of the Yankee riders aren’t beating him, they sure do give him a good go definitely off the start and even come close to beating him in races, so if I can go out there and try to do that then I’ll be happy.

You and your fiancé Abby have also had a daughter over the off-season, how has that changed your preparation? It must be a great feeling for you guys to have your first child. 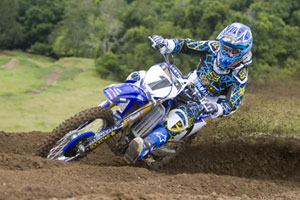 The number one plate will be a target for all

Yeah, for sure. Lila was born on the 15th of March, which was supposed to be the first round of the MX Nationals [laughs]. Luckily it got pushed back! It’s been two weeks now and she is going well, and Abby has fitted the role of being a mum good.

We are getting into a good routine and it’s made our house a home now that little Lila has been born. It’s the best feeling in the world that I guess only parents would know how it feels. It gives me that little bit more to race for on the weekends, so I’m just really excited about the way that everything is going at the moment.

Speaking of your family, your brother Ryan has joined you on Yamaha this year now that he’s on the MX RAD team. How has that been so far?

Ryan’s really happy at the moment since he has joined the MX RAD team. The team’s unreal, they can’t do enough for him and are just a real good bunch of guys. They are putting in a lot of effort, which is what the sport needs. Ryan even said to me the other day after we did a club day at Canberra that he didn’t really care how he went, even though he was the first 250F rider home, and that he was just happy to be riding the bike and having fun again. I think he’s going to have a couple of guys that are fast and a lot of them have won championships before, so it’s good that he has found a home with MX RAD on a Yamaha.

Looking towards your future now that you’re a family man and you’re in the best form of your life right now, is going back to America still a goal of yours?

Both Abby and myself always had plans to go back over there, and I want to go at least for the Supercross championship. My Supercross skills are definitely better than my Motocross skills, so to get back there and try to race for a championship is something that is definitely on the cards for next year. Abby, and Lila I guess, will support my decision and we’ll go over there and do it as a family. After that then we’ll come back here and try to race the Super X series here, but at the moment I just want to focus on winning as many races as I can and to stay healthy. But for sure, seeing myself over in the U.S. is a goal that I don’t want to let go of before I retire.

Well good luck in the MX Nationals in your quest to retain that number one plate. We’ll be cheering for you.