Josh Coppins came so close to the Motocross World Championship in 2007, and this year he hopes to finally seal the crown. 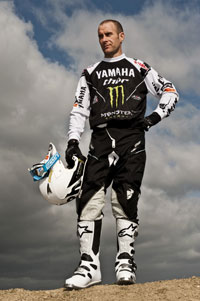 New Zealander Josh Coppins will remain with the factory Monster Energy Motocross Team for the third season in a row in 2009, hoping to finally capture the elusive MX1 World Championship that he came so close to winning in 2007.

The veteran has 10 grand prix victories to his credit, taking one last year in Germany, but now it’s him time to step up and take the world championship from teammate Davide Philippaerts.

World motocross kicks off in next weekend, and Yamaha supplied this interview for us with the 32-year-old.

Josh, 2008 was a test in many ways, both on (pre-season injury) and off the track. Do you think you might be operating again at the level you reached in 2007 now?

I think I am close; it’s more of a mental thing at the moment. In 2007 I had no doubts at all but after a bad season like ‘08 you start to question yourself a bit, but to answer your question yes I feel I am getting close. However it’s important to realise that the competition has stepped up their game also; I know it will be a tough fight!

You changed your trainer over the winter. How was the new programme and how are you different approaching the new season?

Well I was looking to change things up a little. I had great success with my previous trainer but I wanted a change and that’s why I moved over to Russell White. So far I have improved on a few of my weaknesses but I think it will be over the whole season that the improvement will show. I don’t want any ups-and-downs like last season. I want to arrive at every race fresh and ready to do the job, because that’s what it’s going to take to win, week-in week-out of good consistent results.

An unavoidable question…fatherhood! Has it affected your mindset at the races at all?

No, not for the races but in the week, yes a lot! It’s not just about me anymore I have a family to look after and provide for. At the races it is about 100% focus on the job but you sure do think about things twice in the week! Like your future and commitments etc. 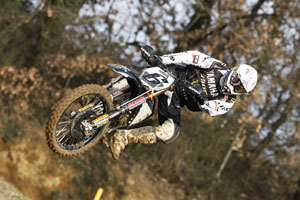 Coppins will be aiming for his first world championship in 2009

Yes, very well, like I said earlier ‘08 was a tough year for me on many levels, but we started work early on the ‘09 bike and we did a good job. We have improved in all the areas that I felt needed addressing, but it’s important we don’t stop and keep pushing as our competitors won’t stop and at the moment I feel we have a good advantage and I want to keep that!

Yes it sure is going to be a bit different, good for some riders and bad for others, but for me it doesn’t matter too much. I think it will be a close race where as normally the first GP in the sand isn’t too close.

2008 was not the best year but you were still in the title hunt until the thirteenth round. On a better scale you must be once again one of the favourites…

Yes you’re right, that’s a nice way to look at it. I wasn’t happy in ‘08 on-and-off the track and to be honest I didn’t enjoy my racing and that’s a very bad thing. So far I’ve loved my racing in 2009 and I want to keep it that way; to be in the title hunt for so long last year after a lot of set-backs makes me confident for 2009.

You are now one of the older riders in the class. Does the experience make up any disadvantages lost to youth?

I think not. In 2007 ‘yes’, but the teams are so good now and they offer us riders a lot of support in this area. The good riders in their mid-20s have been through a lot already so they normally know how to handle themselves, but their advantage is that they recover a bit quicker and don’t feel the aches and pain quite as much. For the first half of the season this doesn’t apply too much but after mid-season when the going gets tough yes it does, this is also why I changed trainer because I wanted to improve this area and improve my diet to try and help with things like recovery and injuries and I’m happy to say so far it’s been working well. 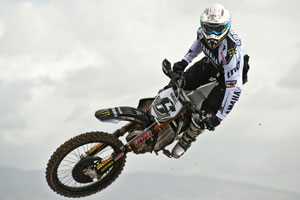 Coppins has 10 GP wins to his credit

What riders will surprise us in MX1 this season?

Marc de Reuver will be better and confident in all conditions. Clement Desalle will have some very good races. For the rest I think there are many good riders going into 2009 so it’s hard to pick one or even several! I think I will surprise a lot of people…. why? Because many think I am not the ‘Josh of 07’, which is true, I want to be even better…

Now you are based in the UK with a young family does it mean past talk of retirement will not necessarily surface again in 2009?

Yes you’re right. In the past I have always wanted to return to New Zealand as soon as possible, and although I will return one day, I am no longer in a hurry. I don’t even want to think of retirement. In 2008 I worried too much about my future after motocross, but the truth is I am a good rider and I still have a lot to offer. Besides I’ve been smart and invested wisely and along with all that I realised things just have a way of working themselves out. For me and my family I want to enjoy every day of life and racing and work hard and take it as it comes; I don’t want to talk about retirement anymore.