MotoOnline.com.au brings you the inside scoop on Supercross rider Daniel McCoy’s return to Australia from the USA. 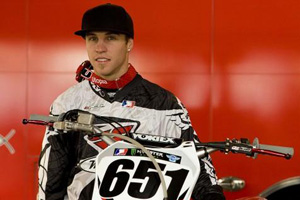 McCoy will likely return home for the MX Nationals

If riders were awarded points for hard work and determination, Daniel McCoy would have been crowned a champion many times over by now. With massive amounts of potential, and talent to burn, the New South Welshman made the transition from Australia to the American Supercross and Motocross scene in 2009.

McCoy had a solid season with Woodstock Honda Thor Racing last year where he scored five podiums in the second half of the MX Nationals to claim sixth overall in the outdoors, before going on to finish fourth in the Super X series with a best result of second at Townsville.

Those results earned him a ride with the Moto Concepts Honda team in the USA for this year. But after a difficult season to date qualifying for just two main events from 10 starts against the best riders in the world, it’s likely that McCoy will return to home soil to start his season all over again.

MotoOnline.com.au caught up with the 24-year-old direct from his American base in California to find out why he’s not finishing up the season, and also to see what his plans are when he returns home.

Firstly DMC, it looks like you’ll be sitting out the remainder of the AMA Supercross series and returning home to Australia, right?

How did that come about?

Basically the team that I was riding for wasn’t paying me and we had a lot of troubles with the engine builders, so with them not holding up their end of the deal I have no choice but to come home and look for a ride.

You only arrived in America a couple of weeks before the AMA Supercross season started, so you didn’t really have much time to gel with the new 2009 model CRF450R or with the team, did you?

I didn’t get here until December the 15th, and with the new model bike it is totally different to the ’08. Setting it up was really hard with a new team, and they didn’t have any parts for us to test because the bike was so new and there was no parts available. It’s been an uphill battle trying to get it set up, especially with the team changing team managers [Steve Lamson was employed after the start of the season], switching out mechanics, and changing from Fox shocks to Pro Circuit after a few rounds.

I wasn’t even able to ride or train for a solid week before the races. My whole preparation was not good, just because of the circumstances of me trying to setlle in here, let alone trying to get the bike set up and communicate with the team when they didn’t even have the knowledge to do anything. Finding your feet and trying to get set up makes it twice as hard when you’re working with a brand new team and a brand new bike, doesn’t it?

For sure. The hardest thing was the team with no knowledge. It was a brand new team, and the team owner doesn’t know a left foot peg from the right foot peg. We were trying to communicate with Steve Lamson, the team manager, about things that we needed, but the team owner didn’t want to spend money and buy the parts that we needed for us to get the bike set up, which made it hard.

What’s it been like for you over there racing with the best riders in the world – guys like Chad Reed and James Stewart?

The experience must be invaluable, especially now that you’re returning home to race.

Yeah, I’ve learnt so much in these 10 races that I’ve done in my training and race preparation – just things that I really needed to know about myself to make sure that I’m prepared 100 percent for the races. I definitely can’t see myself going backwards once I get home.

Was the transition to race in the U.S. about what you expected, or was it more difficult?

I knew that it was going to be as difficult as it has been. If anybody was to look at the line-up of talent in the 450 class, you’d be crazy not to think that it was going to be hard. With at least one factory guy not making the main event every week it shows you just how hard it really is. So yeah, I was just there doing the best that I could with what I had. Obviously I’m definitely not satisfied with my results that I accomplished, but I believe that things happen for a reason.

Do you feel that the Australasian Super X series, with the big tracks and all,  prepared you well for the move to America?

The layout of the tracks were similar, but the tracks over here are way more technical than what the Super X tracks were. The dirt over here is a lot different, too, there’s always lots of ruts and things happening with the track compared to back home. It helped me a little, but I wouldn’t say a great lot that’s for sure. Competing in the USA was invaluable for McCoy's experience

What are your plans for when you get home? There’s only a few weeks to go before the MX Nationals start.

I’m talking to some teams at the moment, trying to get myself on a bike. To be honest I don’t care what it is, I just want to race. If I have to I’ll turn up in my van with a bike. I just want to get everything back in order and get back home to get it sorted as soon as I can, but I also have to tidy up what I’ve got here before I come home. The sooner I get home the better, so I can get it all rolling.

What are your expectations for the MX Nationals when you get back?

Like I said before, I’m not going to go backwards, that’s for sure. I’m a lot more determined and more hungry than I’ve ever been. I’ve got a lot of fire in me, and a big reason for that is because I’m pissed off with what’s happened here. I want to prove a point and put it on the podium every weekend. I won’t be happy with anything other than that.

Have you been riding outdoors at all while you’ve been in America, or mostly focusing on Supercross?

To be honest I’ve only ridden three days outdoors and I feel right back at home. I’ve only got the Honda with production suspension and I already feel better than what I did at the end of the MX Nationals last year. Once I get a set up and at least know what bike I’ll be riding I will be able to move forward – hopefully get the results that I’m looking for.

Well good luck with it all, and we look forward to seeing you back in Australia.

Thanks a lot, I’m looking forward to it.