Stoner was fastest overnight in Qatar

Ducati Marlboro’s Casey Stoner set the fastest lap time at the second night of testing in Qatar overnight, posting a 1:57.139 to head world champion Valentino Rossi by 0.608 in what was a dry night of testing unlike the opening evening. One thing to note is that Stoner only did 37 laps compared with Rossi’s 60, and those on the spot have reported that Casey rarely did more than five laps in succession.

Texan Colin Edwards continued his strong pre-season form for Tech 3 Yamaha, although the bikes don’t yet have the Monster Energy livery that many are expecting for the 2009 season. Edwards was just ahead of Andrea Dovizioso on the first of the Repsol Hondas.

The big news is that his teammate Dani Pedrosa crashed late in the evening at around 10:00pm and suffered injuries to both his left wrist and knee. It’s likely that the Spaniard will sit out tomorrow night and head back to Barcelona for x-rays to find out the official prognosis. Pedrosa was 10th on the timesheets despite only completing 28 laps.

Fifth and sixth on the timesheets was the Rizla Suzuki pairing of Chris Vermeulen and Loris Capirossi, continuing Suzuki’s strong run on their new contender for this year.

Fiat Yamaha’s Jorge Lorenzo was next, developing a feel for the Bridgestones further, although don’t be surprised if he is immediately on the pace come race time next month. Lorenzo and his team are methodical in their approach. He headed Gresini Honda rider Alex de Angelis. 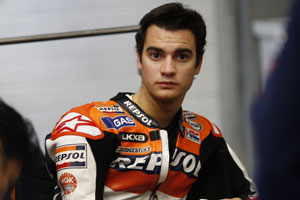 Pedrosa crashed and is headed back to Spain

Another rider and team methodical in the approach is Nicky Hayden and his Ducati squad, setting the ninth quickest time for the night after being fastest on night one, but he is satisfied so far.

Looking back through the timesheet we see Marco Melandri on his Hayate Racing Team ZX-RR in a respectable 14th position, just over two seconds off the pace of Stoner, but it’s great to see him back on track.

Marco was in front of both the Pramac Ducatis of Niccolo Canepa and Mika Kallio, with Kallio also causing a red flag with a crash not long after Pedrosa’s. Tech 3 Yamaha’s James Toseland was the slowest on the night in 17th, which must be disappointing for the Brit.

That crash at Sepang where he flew through the air like an acrobat must be shaking up his confidence quite badly, but with Edwards so strong it’s important that Toseland can acclimatise to the Bridgestones quickly and get the results he needs.

Australian Superbike
International Entertainment Group’s Yarrive Konsky has spoken out about the first round of the Australian Superbike Championship under IEG’s new management, satisfied with its early beginnings as it kicked off in conjunction with the World Superbike event at Phillip Island last weekend.

“I’m really happy with the outcome of Round One,” Konsky said. “Managing the event this weekend has been reasonably easy, everyone has been really positive. I have to say a special thanks to Woodstock Bourbon and Motorcycling Australia – we’ve put this Championship together in the space of three months and what we see here is a credit to everyone involved.”

Konsky explained that his aim is to eventually attract the Australian riders who are based overseas to come back and compete in the ASBK, which is something that hasn’t happened in a very long time in Australian road racing.

“I’d love to see some of those guys come back and race in our championship,” Konsky explained.
“I think our level of racing is great, and our lap times proved it this weekend. One of our key objectives over the next 12 months is to ensure the calendars don’t conflict, and hopefully we can get the likes of Troy Corser competing at an Australian Superbike – no different to Chad Reed competing at an Australian Supercross.”

Much to the delight of many, Konsky confirmed that the series has sparked a deal with Network Ten to run on the new ONE 24-hour sports channel, which is set to start broadcasting officially on 26 March.

“We’ve done a great deal with Channel Ten. We’re going to be on their new 24-hour sport channel as well as on regional TV via Southern Cross Ten, so we’re really happy with the exposure we’re going to be able to provide Australian Superbike racing this year,” he concluded.

Konsky also revealed that there will be a season highlights DVD to be released at the end of the year, revisiting each and every event of the year. Jay Marmont on his way to last year's MX title

The second round of the Woodstock Bourbon Australian Superbike Championships will take place at Symmons Plains Raceway near Launceston, Tasmania, on 3-5 April.

The official launch for the 2009 Australian Motocross Championship is taking place today at the venue of the opening round, which will take place at Albury Wodonga on 5 April. The series launch will give Albury and Wodonga a sneak peak at the action they can expect to come their way with the first round.

Factory teams, including last year’s series champs Jay Marmont, Luke George, and Tye Simmonds, will all be in attendance, testing the Albury Wodonga Motorcycle Club track, their bikes and having a chat with visiting media.

It’s going to be a tough year of racing this season with top riders in each class, and the newly introduced race formats will make the racing even more unpredictable then last season.