World Superbike 2009 is go, with the opening round of this year’s championship officially underway at Phillip Island. Smrz is fastest so far. 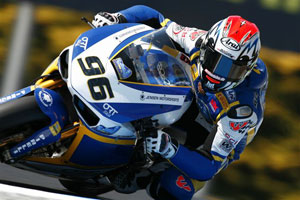 Smrz was fastest in World SBK

World Superbike 2009 is go, with the opening round of this year’s championship officially underway at Phillip Island. Today’s Racing Insider is late as we write this as the on-track action has just come to an end, but the good news with that is that we’ll be able to give you a rundown of all the latest from today direct from Phillip Island. Check back over the weekend for blogs direct from the circuit to give you the inside scoop straight from the circuit media centre.

Fastest man of the day honours went to 25-year-old Czech rider Jakub Smrz (Guandalini Ducati) with a 1:32.312, which is faster than what Troy Bayliss’ fastest race lap was one year ago, but around half a second slower than Troy Corser’s circuit record.

“For me, Phillip Island is almost the best circuit in the world,” Smrz said. “It is easy for me to make a good lap here. The bike is a good bike and 95% similar to last year’s so I have been able to get on the pace very quickly. For sure, I have a lot of confidence with the tyre, even in these hot conditions.”

Making Smrz’s fast lap all the more sweeter was that he headed Bayliss’ replacement on the Ducati Xerox factory team, Noriyuki Haga. Haga posted a 1:32.569, finishing up narrowly ahead of impressive Brit Leon Haslam (Stiggy Motorsport Honda) with a 1:32.623. Rounding out the top five was the Alstare Suzuki pairing of Max Neukirchner and Yukio Kagayama.

Aprilia is officially back in Superbike competition, with Shinya Nakano a promising sixth fastest ahead of Michel Fabrizio (Ducati Xerox), while American rookie Ben Spies (Yamaha) was eighth in his first year of World Superbike.

Spies was impressive on debut, as was his big bang YZF-R1, lapping fastest in the opening Free Practice to top his first ever official World Superbike session. The thundering deep noise coming from the R1 is brilliant, as is the fact that America has yet another SBK contender.

BMW had a slow start to its Superbike campaign with 16th position for Corser and 20th for Spanish rider Ruben Xaus, although there are many changes coming through with those bikes each and every time they hit the circuit. Don’t count them out just yet though, because Troy is just over a second off of Smrz.

Factory PBM Kawasaki rider Broc Parkes finished up 19th quickest in his step up to SBK’s premier class after many years as a Supersport front runner.

Another rider to hit the track for the first time was Karl Muggeridge, on his Alstare-prepared privateer Suzuki, entering the season with no testing, and finishing up 24th fastest, one position behind Aussie Brendan Roberts (Guandalini Ducati).

It’s set to be a miraculous season this year, and we can’t wait for tomorrow’s action to get underway. Let’s not forget that the all-new F1 style Superpole session will be officially introduced, too, which will bring much excitement to the series.

The Supersport runners also got their 2009 campaign underway, with little change from the previous years as Hannspree Ten Kate Honda set the early pace. Quickest time of the day went to reigning champion Andrew Pitt, who powered to an impressive 1:34.833 seconds – the other champion within the Dutch team’s ranks, Kenan Sofuoglu, was just 0.006 seconds behind.

The provisional front row is completed by Frenchman Fabien Foret on the first Yamaha, and Australian Garry McCoy, who looked impressive on his home track with the three-cylinder Triumph despite a crash. McCoy will also be doing his part to support the tragic Victorian bushfires, holding an autograph session for $2.00 per signature with all proceeds going towards the unfortunate. There was also an auction from McCoy.

Check out www.worldsbk.com for a full report of today’s action. Maxwell was best in ASBK

The Woodstock Bourbon Australian Superbike Championship got underway today under the guise of International Entertainment Group, with a new media representative employed and sensationally providing a detailed press release from day one of the ASBK action.

One of the most positive things is that riders and teams currently seem very impressed with the new promoters, which is a sign of good things to come as the series was put together quite late.

Motologic Honda rider Wayne Maxwell posted the fastest lap in his return to the Superbike field, lapping with a best of 1:32.815 seconds in qualifying. Maxwell’s time would have been good enough for sixth grid position in the world series.

Reigning Australian Superbike Champion Glenn Allerton was next best aboard the second Motologic Honda, with veteran Shawn Giles producing the third best time aboard his Team Joe Rocket Suzuki. Jamie Stauffer was fourth quickest in Yamaha’s debut with the new YZF-R1, ahead of privateer Craig Coxhell on his CJC Racing Honda. Rounding out the top ten was Daniel Stauffer, Robert Bugden, Josh Waters, Kevin Curtain, and Chris Trounson in a stacked field of local talent.

Wrapping up the action was the Superstock 600 class, with Chris Beck scoring pole ahead of Zach Thackeray, Jesse Austin, and Mitch Pirotta. The class has a massive grid of 39 riders and is set to be action packed when the racing gets underway tomorrow for race one.

Both the Supersport and Superbike classes will also have their opening races tomorrow, so check back for our ASBK blog for quick updates over the weekend. 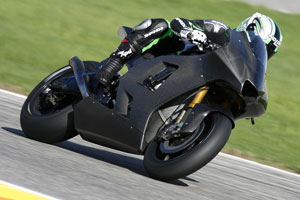 Marco Melandri is officially back, as is Kawasaki

It’s official! Marco Melandri will begin the season on a privately entered Kawasaki in a one rider team. The most surprising thing here is that it truly is a Kawasaki team. Welcome back, Team Green. Here’s the release from Kawasaki:

Kawasaki announces that after constructive talks between Kawasaki, Dorna and other involved parties, a new one rider team will participate in the 2009 MotoGP Championship season.

This decision was made after negotiations that followed Kawasaki’s January 2009 announcement to suspend its MotoGP factory team activities due to the economic crisis. Rider for the new MotoGP team will be the Italian Marco Melandri. The team will be equipped with Kawasaki motorcycles and supporting materials.

That Kawasaki has come to this new team approach is the result of on the one hand the need for a strong reduction of racing investments and on the other hand the necessity to come to constructive solutions for all related parties.

The new team will disclose more details about its 2009 season’s plans on a short notice.

AMA Superbike
Surprising news came from Kawasaki regarding team rider Roger Lee Hayden today – the Monster Energy Attack Kawasaki rider pulling out of Daytona due to personal resons, according to a team media release. Hayden, a former Supersport champion, was a favourite for the Daytona Sportbike category.