Silverstone’s new MotoGP circuit will be the fastest circuit on the MotoGP calendar, according to a press release from the destination of the British Grand Prix. 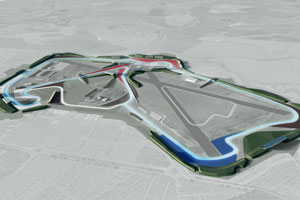 A computer generated image of the new Silverstone

Silverstone’s new MotoGP circuit will be the fastest circuit on the MotoGP calendar, according to a press release from the destination of the British Grand Prix in 2010. Silverstone will take over from Phillip Island as the quickest track of the year if simulations completed are to be believed, with expectations putting the average lap three km/h quicker than the Australian circuit.

The new circuit, which will feature a spectacular new section of track running from the approach at Abbey corner to a tightening ‘Arrowhead’ hairpin at the inside of Becketts, will measure 5.67 kilometres in length – just over half a kilometre longer than the existing 5.14 kilometre grand prix circuit.

Scientifically measured data, based on mathematical simulations, has calculated that the average lap time for MotoGP riders around the new track would be 1:51.456, racing at an average speed of 182km/h.

There’s one thing to claim it will be the fastest circuit before they actually ride there, but as an Aussie-based website, no circuit comes close to the scenic surroundings of the Island. The good thing is that riders seem to love fast and flowing tracks, breaking the tradition of computer-generated circuits that have been so popular this decade.

World Superbike
In a preview to the opening World SBK round this weekend at Phillip Island, Broc Parkes mentioned one of the most crucial factors in what could turn Kawasaki’s success around for this season now that the factory team is run by Paul Bird Motorsport with Parkes and Makoto Tamada piloting the ZX-10Rs.

“Kawasaki has been very supportive, and they sent over nine Japanese engineers and technicians to the Phillip Island test to help us get the bike ready for the year. I suppose with no team in MotoGP now they are really committed to world superbike and making this team work, so it is great,” he explained.

“We still have a bit of work to do, but I was a bit surprised with my time. It is only early days, and in light of the other times posted in recent days, I think we may be more competitive than people think. I think running in the top 10 is absolutely possible and I’m ready for a big year.”

With no team in the premier class paddock, it does put Kawasaki’s SBK team in a brighter light, and increased factory support could be the difference of 15th or top five in the cut throat field of 2009. It’s about time we saw Team Green run up the front in SBK again. Also keep an eye out for Johan Lascorz in Supersport.

World Supersport
Reigning Supersport World Champion Andrew Pitt will do his bit for the bush fire victims in Victoria, pledging to donate whatever prize money he wins at this weekend’s opening round of the title at Phillip Island.

“As much as I want a third world championship, I’m not looking that far ahead so early in the season. What is more important to me right now is winning races,” Pitt said. “That is what I love to do and that is what I want to do for not only my Australian fans, but also for my fellow countrymen who have been affected by the horrific bushfires in Victoria, and to the thousands of emergency services personnel who have stuck their necks out for all of us.”

In a showing of real Aussie sportsmanship, Pitt has pledged to donate his prize money from this Sunday’s race to the Red Cross Victorian Bushfire Appeal Fund. 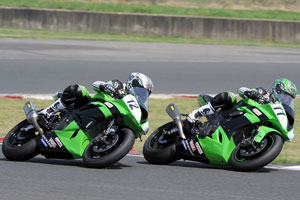 Kawasaki has revealed its livery for this year’s Australian Superbike Championship in a final shakedown at Eastern Creek last Friday. Superbike rider Kevin Curtain and Supersport rider Ben Attard are both determined to put green back up front in Australia, too.

American Superbike
Damian Cudlin has confirmed that he’ll compete in the American Daytona Sportbike Championship this year, signing with the ESP Yamaha team – also continuing his World Endurance Championship role with Phase One Yamaha in what will be a busy year for the recently married 25-year-old.

Speaking from his current base in California, Cudlin explained his intentions for the 2009 season and what he expects from the challenging year ahead.

“I’m really excited to ride for the ESP squad this year and to make my debut in the AMA series.” Cudlin said. “I’ve wanted to race in America for a while now, but the right opportunity just never presented itself. Now with the ESP crew behind me, I really think I can make a splash over here and build a career for myself in the states.”