Jamie Stauffer will be very determined come round one of the Australian Superbike Championship this weekend.

MotoGP
One of the most disappointing things that could impact this year’s MotoGP World Championship is if Casey Stoner is forced out of the season due to his frustrating wrist injury, which has been highly speculated after the recent Sepang test, where he lapped fastest despite intense pain.

That possibility is now looking slimmer as Ducati Marlboro crew-chief Livio Suppo told MotoGP.com that Casey most likely won’t need another operation, and despite his disappointment regarding the success of the surgery, he’ll just have to work extremely hard to ensure it heals correctly.

Casey’s future in this sport is critical for the sport’s success over the next couple of years as MotoGP enters one of its most difficult financial eras ever, simply because he is one of the only riders in the universe who can challenge Valentino Rossi in outright speed during a race.

One thing that Suppo also mentioned was his confidence in new signing Nicky Hayden, who has had minimal time on the GP9, but according to Suppo he was actually as fast as Casey in the first two sectors at the notoriously technical Sepang circuit.

In other news, Marco Melandri will line-up in the Speedcar series again, competing in the Dubai round this weekend. Melandri impressed on debut at Qatar, although his success on four-wheels is no doubt overshadowed by his uncertain future in MotoGP at the moment. There’s still no word on his future, although we aren’t expecting him to be at the Qatar MotoGP test that starts on Monday. 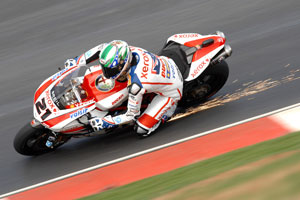 Will sparks still fly without Troy on the WSBK grid?

When the 22nd running of the Superbike World Championship gets underway at Phillip Island this weekend, many will miss current world champion Troy Bayliss after he retired from professional racing at the end of last year.

The new blood and excitement leading into this year’s series has overshadowed the fact that Australia’s own world champ won’t be on the grid come round one, but we get the feeling that fans will miss his unrivalled tenacity once the green flag drops on Sunday.

He’ll likely be mobbed around the pit area as he’ll be on hand supporting his Ducati ‘family’, but I bet that nobody will wish he was out there more than Troy himself. One good thing of his retirement is that gone is his dominance, and in comes the fight of the century so far. We can’t wait.

Australian Superbike
As amazing as the World Superbike opener is going to be, we here at Moto Online find ourselves wondering where the hype is for the Woodstock Bourbon Australian Superbike Championship? Now, it’s understandable that the world series is going to overshadow our domestic stars at this round, but there hasn’t even been a press release regarding recent tests or any such thing. Since the final round’s going to be at the MotoGP round in October, what’s the bet that nobody even realises there’s an ASBK championship fight on the line if it goes down to the wire? I have confidence in the new promoters at IEG to put on a good series, but the promotion needs to start already! 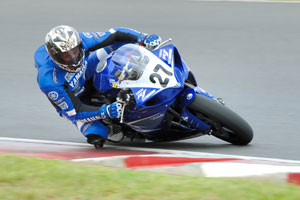 Jamie Stauffer will race for his son, Max, this year

One of the saddest pieces of news we have received this year came through from Yamaha today in a statement from four-times national champion Jamie Stauffer. We’ll post the news here.

The below statement is on behalf of multiple Australian Superbike and Supersport Champion Jamie Stauffer and his wife Emma.

“Just over two weeks ago our world was turned upside down when out our beautiful six year old son Max was diagnosed with acute lymphocytic leukaemia. We have been advised this is the most common form of leukaemia in children and he is in the standard range, which if there is a best option in this situation then this is it,” said Stauffer.

“Max has commenced daily treatment at home as well as two days per week of chemotherapy at the John Hunter Hospital and seems to be responding well at this stage.

“We urge all parents to be aware of the signs as we only took Max to doctor as a precaution as he seemed to be bruising very easily, we like many other parents thought Max was suffering from normal playground casualties.

“We would like to take this opportunity to thank all the staff at John Hunter Hospital who are just tremendous and have given our family so much support in this short time. We also urge people to show their support by joining the ‘World’s Greatest Shave’.

“The race track can be a tough environment but the road that lies ahead for Max is a lot tougher and I will be racing this year with the knowledge that seeing me win is what is going to spur Max on in his fight ahead.”

Stay strong guys, Max is a great young kid and we’re all thinking of you in this difficult time. Jamie will be very hard to beat this year as he fights for his third Superbike and third Supersport titles.