Spanish MotoGP rider Sete Gibernau will miss the upcoming test at the Losail Circuit in Qatar that starts this Sunday. 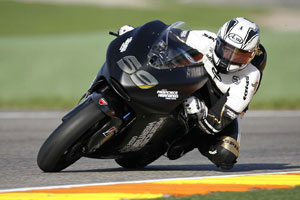 Sete Gibernau will sit out the upcoming Qatar test

Spanish MotoGP rider Sete Gibernau will miss the upcoming test at the Losail Circuit in Qatar that starts this Sunday and spans from 1-3 March, after aggravating an old shoulder injury while training at his home in Spain. The former series runner-up tore a ligament in his shoulder, forcing him to sit out the test. Sete is riding on the all-new satellite Ducati Guinea Ecuatorial Team, making his return to racing this year for the first time since 2006. After a bunch of positive tests last year for the factory test team, Sete hasn’t exactly set the world on fire yet, but many insiders believe he could be a wildcard for victory at selected rounds if he can ride like the Sete of old.

Reports from Europe are suggesting that Rizla has re-signed with Suzuki in the MotoGP World Championship, after the team had completed testing in Malaysia with no sign of the cigarette paper company. Team riders Loris Capirossi and Chris Vermeulen were both towards the top of the timesheets in Sepang, prompting Rizla to remain with the team for another season at least. The question is, would Rizla have remained if the Suzukis were off the pace in Sepang? We never truly will know, but it is great that Suzuki rose to the occasion and have managed to retain one of the most popular sponsors in MotoGP.

Tech 3 Yamaha is another team that is on the verge of securing a major naming rights sponsor despite the current financial crisis, with Monster Energy Drink reported to be in final negotiations with the satellite squad. Monster was a former sponsor of Kawasaki and recently signed Valentino Rossi to a lucrative deal. The fact that these sponsors are stepping up and committing to MotoGP despite the financial crisis is a positive sign for the future, and it’s comforting for everybody to know that the sport’s supporters are still as solid as ever. 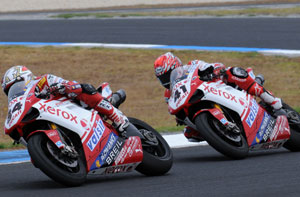 Fabrizio leads Haga at the Island

The weekend saw the remaining factory Superbike World Championship teams take to the track for the second round of pre-season testing at Phillip Island just one week before the series kicks off at the same venue, with Michel Fabrizio (Ducati Xerox) setting the pace with a 1:32.19, topping teammate Noriyuki Haga and fast-learning American rookie Ben Spies (Yamaha), both who were in the 1:32.3 bracket.

The Alstare Suzukis of Max Neukirchner and Yukio Kagayama were fourth and fifth respectively, while Aussie favourite Troy Corser sixth quickest on his BMW S 1000 RR with a 1:32.93 despite sitting out much of the final afternoon following a collision with a seagull.

Controversy surrounded the tests though as the official World SBK website claimed Fabrizio to be fastest, while Ten Kate Honda’s Jonathan Rea claimed that he posted the fastest lap of the entire week with a sizzling 1:31.8.

“Well, according to some websites, I crashed today and was like seventh quickest,” he said. “I’m happy to report, however, that I didn’t crash and did a 1:31.8, which we think was the fastest today!”

Either way, next week is when things get down to business and that will be when we find out who the real fast man of Phillip Island is.

Tickets to the event are available online at www.phillipislandcircuit.com.au/superbikes/index.html, or by calling the circuit on 1 300 728 007.

Popular Aussie Garry McCoy posted the second fastest lap in World Supersport testing at Phillip Island onboard his Triumph, slotting in behind former world champion Kenan Sofuoglu. Defending champion Andrew Pitt was third fastest, with the trio all within a tenth of a second on the final timesheets. All three riders were under the 1:35 mark, which is right on lap record pace. 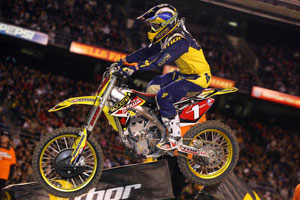 San Manuel Yamaha’s James Stewart has continued his dominance in AMA Supercross, an FIM World Championship, scoring his seventh victory in succession in Atlanta, Georgia, ahead of Aussie Chad Reed (Rockstar Makita Suzuki) to take over the series points lead on the weekend.

Stewart had a DNF at the opening round in January and has since fought back in spectacular fashion over defending series winner Reed, but now the ball’s in Reed’s court to fight back and see if he can stop Stewart’s dominance. The race on the weekend saw Stewart win by a comfortable margin of 9.417 seconds over Reed, while Ryan Villopoto (Monster Kawasaki) continues to improve with a solid third on the weekend. Reed again struggled with his starts and came out of the first corner in 10th position, allowing Stewart to easily streak away early on and seal yet another win.

“The start was great,” said Stewart. “The San Manuel Yamaha pulled another holeshot. It was a good race for me. The track was tough but we came out on top. I’ve always liked the ‘ATL’ and I’m glad we could do well here. I want to thank all the fans and all the motivation they give me. It feels good to have the points lead but there is a long way to go.”

Broc Hepler (Yamaha) made his return to racing and actually ran in second for a while, but eventually crossed the line in fifth behind Andrew Short (Honda Red Bull Racing). It was an impressive ride after sitting out the entire season (and most of last year) through injury so far.

It was a tough night for the Aussies with either Michael Byrne (Rockstar Makita Suzuki) or Daniel McCoy (Moto Concepts Honda) making the main event, but both did show glimpses of speed during the evening.

The series will now move on the Indianapolis, Indiana, this weekend, where bad boy Jason Lawrence will also make his debut in the 450cc Supercross class.