Today marks a very important day in motorcycle racing history as the global financial crisis has officially taken its toll on MotoGP. MotoGP will be much different in years to come

Today marks a very important day in motorcycle racing history as the global financial crisis has officially taken its toll on MotoGP, with a press release from Dorna announcing the expected procedures to be put in place this year to make the series more cost effective. Much of what we have speculated is included, but we’ve included their press release in full for you to see the exact changes that are being implemented.

2. From Czech GP, maximum 5 engines can be used in 8 races. No changing of parts will be permitted except daily maintenance.

3. Ceramic composite materials are not permitted for brakes disc or pads.

4. Launch control system is not permitted.

5. Electronic controlled suspension is not permitted.

6. Only 2 post race tests at Catalunya and Czech GP for development purposes using test riders only are permitted.

Friday morning practice at each round has been axed all together for every class, while the MotoGP class’s regular practice and qualifying lengths have been slashed, meaning that riders are going to have to get on pace as quickly as possible – both speed-wise and with their bike set-ups.

The engine restriction rule was one of the world’s worst kept secrets, although I’m sure that there are some manufacturers that will be scrambling to ensure their engines will last for the proposed timeframe. It will be very interesting to see how the FIM enforces these rules if a team does happen to have an engine problem.

We also hear it is going to be even stricter for 2010, with this year’s rulings in the second half of the season just a test platform for guidelines to be implemented in a year’s time. Electronic restrictions will also be an increasing reality, too.

The expensive post-race tests that teams were participating in on the Monday following almost every GP in recent years has been axed, too, with just the Catalan GP and Brno GP permitted – using test riders only. I bet riders are secretly pleased with this rule in some ways.

In other GP news, Silverstone has released details of its revised circuit set for MotoGP. Check it out here. 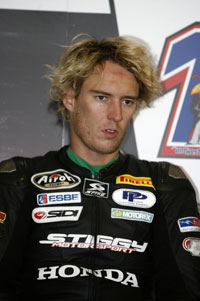 West was fastest in Supersport testing

The final day of testing for the first lot of Superbike World Championship took place at Phillip Island yesterday, while more will hit the track this weekend in what will be the final run before the opening round of the series next weekend.

Fastest was Roman Emperor Max Biaggi on his factory Aprilia RSV4, scorching to a 1:32.5 in what signals Aprilia’s teething problems are being put behind as they quickly develop their new V-four in their return to Superbike racing. The time is right on Troy Bayliss’ current SBK record. Second fastest was Frenchman Regis Laconi, who has been on the pace all week, while Shinya Nakano put the second of the Aprilias in the top three. Surprise of the day came Broc Parkes on the first of the factory ZX-10Rs. Lapping in the 32s to edge out Leon Haslam in the top five.

Fastest Supersport was again ex-MotoGP rider Anthony West, who lapped at 1:35.9 – around a second off of the lap record held by Sebastien Charpentier.

Australian Superbike
Two riders not familiar to the World Superbike field that were testing alongside them at the Island this week was Motologic Honda riders Glenn Allerton and Wayne Maxwell, the reigning Australian Superbike Championship winning team. Riding on Dunlop tyres compared with SBK’s spec Pirellis, both Allerton and Maxwell lapped on the pace of the world championship regulars despite their much less modified ASBK-spec Fireblades. Sources on hand said that both Maxwell and Allerton were in the 32s.

American Motocross
Is defending AMA Supercross Champion Chad Reed about to make a shock return to the outdoor AMA Motocross Nationals? This is the word on the street in the States and it’s increasingly looking likely. Chad has never won an outdoor title in Australia or the USA, so considering James Stewart isn’t racing this year then he has his most realistic chance ever at the crown. His main competition will be Ryan Villopoto, Mike Alessi and New Zealander Ben Townley if he decides to race (and if Townley does return from injury).