Casey Stoner has topped the timesheets in the opening MotoGP test of the year at Sepang in Malaysia. Stoner was fastest despite wrist pain

Casey Stoner has topped the timesheets in the opening MotoGP test of the year at Sepang in Malaysia, remaining on the top of the charts on the final day on Saturday after again lowering his best lap beneath the circuit race lap record.

The Australian posted a 2:01.043 to lead the way, which was just 0.094 quicker than Valentino Rossi’s best lap of the three day test session, also set on Saturday afternoon despite receiving stitches in his foot and hand just days prior to the test.

“Considering that I have recently had an operation and my wrist has still not fully recovered, to be the fastest rider here is a dream to be honest,” Stoner said. “Now I have to work hard on improving my physical condition and recovering the level of movement I need to ride the bike properly without pain.

“Now I know that I can step up training on my arm and hopefully the situation will have improved for the Qatar test. The GP9 is a good bike and in every test we’ve done with it we’ve come out on top.”

Loris Capirossi remained in the top three for the third day in succession, crediting Suzuki for their outstanding improvement over the off-season. American Colin Edwards was fourth quickest, just ahead of Toni Elias on his factory-spec Gresini Honda, and Queenslander Chris Vermeulen — cementing Suzuki’s improvement in the new year as he too had a very solid test.

Seventh fastest was Repsol Honda’s Dani Pedrosa, who returned to Spain a day early to undergo observation of a knee injury from last year, edging out Rossi’s Fiat Yamaha teammate Jorge Lorenzo with his new number 99.

Nicky’s improvement over the three days was encouraging, although he isn’t where he wants to be right now and told British MCN that it’ll be a long plane ride home as he reflects on the test and tries to work out where he can improve. It seems that the Ducati’s tendency to pump on the exit of the turn is the Kentucky Kid’s main problem right now.

Australian Superbike
News just in: Yarrive Konsky has announced that the Australian Superbike Championship has secured a naming rights sponsor for this year. This is great news if it is in fact a done deal, although attempts to get in touch with Yarrive have not been successful just yet. We’ll keep you posted. 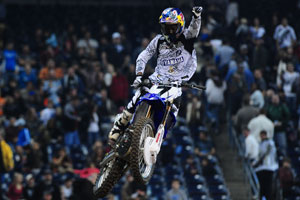 Five in a row for Stewart

“Man it was crazy out there,” explained Stewart. “I was just riding out there and realised it was raining. We got one more race out here in California and so far it’s been good. The thanks really goes out to my team. Larry Brooks, San Manuel, and all the crew they’ve been awesome this year.”

“It was sketchy,” said Reed. “I just tried to put in some consistent laps. The guys put the bike together for the mud and we just tried as hard as we could. Starts are part of the race. I just need to work on them. I really want to thank my team Rockstar/Makita Suzuki. I’m definitely feeling a lot better now than I have been.”

The dominant pair finished over a minute in front of Davi Millsaps (Honda Red Bull Racing), who scored his first podium in rainy conditions for the year. Millsaps edged out teammate Ivan Tedesco and opening round winner Josh Grant (JGR Yamaha).

Daniel McCoy (Moto Concepts Honda) made it two Aussies in the main event for the second round in a row, finishing 17th this week as he continues to find his feet on the difficult US circuit.

The Lites class was won by Jake Weimer (Monster Pro Circuit Kawasaki), who took the points lead as he won ahead of teammate Ryan Morais and MDK KTM’s Justin Brayton. Former points leader Ryan Dungey (Rockstar Makita Suzuki) was fourth on the night.

Queenslander Dan Reardon (GEICO Powersports Honda) was seventh on the night, while returning Aussie Jake Moss (TLD Honda) finished the night in fourteenth position, which was a great result considering the limited amount of time he’s spent on the bike this year.

Freestyle Motocross
Metal Mulisha rider Jeremy Lusk has been critically injured in Costa Rica on the weekend after crashing during the X Knights event on Saturday night. Lusk, an X Games gold medallist last year, crashed while attempting a backflip combo. Here’s a press release from the Metal Mulisha’s publicist:

In speaking directly to Costa Rican Journalist, Jose Luis Rodriguez, journalist for the largest newspaper in Costa Rica, La Nacion (www.nacion.com) who covered Jeremy’s terrible crash and subsequent hospitalization, here are the facts, to date, as we know them:

• Jeremy Lusk was transported to Calderon Hospital in San Jose, where he now remains in a medically induced coma, in stable, but very critical condition where doctors are closely monitoring the swelling on his brain.
• Post-crash, suspected brain trauma required immediate surgery to treat a subdural hematoma on the brain.
• Surgery lasted four hours and 30 minutes.
• X-rays were done to the neck and spinal column and no breaks are being reported by hospital.
• When asked about injuries to other parts of his body, hospital is not reporting other injuries at this time.
• Jeremy was attended to by the head of neurological surgery, Dr. Jorge Ramirez.
• Doctors report that they will know more Jeremy’s future prognosis within the next crucial 36 to 48 hours.

Contact has been made with the Critical Care Trauma Unit at Calderon hospital, where the unit charge tech, confirmed all of the information above.

Communication with Costa Rica, via the Embassy, the media and the hospital will continue all throughout the day therefore, updates will certainly be released as we get them. Please note we are getting all of our information in Spanish and then translating it out for release.

Our thoughts are with Jeremy, family, and friends.