All the news on the opening two days of MotoGP testing at Sepang in Malaysia. Capirossi was fastest on day one

As I type this Racing Insider late on Friday afternoon we’ll be able to update you with both the first and second days of the MotoGP test at Sepang in Malaysia, with a few surprises sprung already in these early stages of MotoGP 2009.

The first surprise is that Loris Capirossi actually topped the timesheets yesterday afternoon on his Rizla-less (there is no sign of Rizla on the GSV-R as they continue to negotiate a deal) Suzuki, breaking the lap record with a stunning 2:01.869 lap. That time is faster than Valentino Rossi’s race lap record from last year by 0.38, signalling that both Suzuki and the new Bridgestone control tyres are right on par for the new year.

Second fastest was Casey Stoner as he continues development of the Desmosedici GP9, although it does seem that his wrist surgery hasn’t gone 100 percent to plan – he complained of pain on both days one and two in Malaysia.

Third was Rossi, fighting through the pain of fresh stitches and again putting in a solid day of development work. Queenslander Chris Vermeulen cemented that fact that Suzuki has made a step forward, sitting fourth on the time sheets just ahead of Spaniard Toni Elias on his factory-spec Gresini Honda. 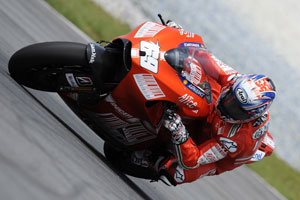 Hayden is still coming to grips with the GP9

Meanwhile, the Marlboro Ducati’s Nicky Hayden finished the day eleventh fastest – two seconds off the pace of the front runners. Yamaha’s James Toseland survived a miraculous high-speed highside in the afternoon, undergoing medical checks but returning to the circuit (albeit slowly) on day two.

The second day, which has just wrapped up in Sepang, saw Stoner jump to the top of the charts with a 2:01.483 just 0.072 ahead of the outstanding Capirossi and then Rossi was third, just 0.143 off of Stoner.

Despite his fast lap of the day, Casey isn’t satisfied with his wrist at this point, completing just 29 laps en route to the fastest lap time of the day.

“The wrist is giving me a lot of problems and I can’t manage more than two or three laps at a time, so it’s difficult to work on set-up because I’m having to break off too often, said the Aussie. “I still can’t ride how I want though and we really need to string a run of consistent laps together, although I know that if I can get a little closer to 100% fitness that problem will be resolved. Hopefully the wrist will feel a bit better tomorrow so that I can try and do a longer run and confirm the positive feedback we’ve had from the bike today.”

Stoner’s pace on the Ducati has never been questioned, although his consistency over the season is going to be very reliant on his wrist and fitness.

The three on the top of the charts have been somewhat dominant throughout the test, although Capirossi and Suzuki’s pace is the real surprise. That redesigned Suzuki is doing wonders for the team, which will also restore faith in the team from Rizla if it’s not too late.

Pedrosa was fourth quickest today, bumping Vermeulen to fifth, but the news isn’t so bright for Dani as he’s headed back to Spain for observation on a niggling knee injury. “Tomorrow a race simulation was scheduled but at the end we decided to end the test session because today I could only do five or six laps in a row and tomorrow I won’t be able to cover the race distance,” he explained. “Last December, in fact, I underwent an intervention to the left knee for the consequences suffered when I slid off in Phillip Island during the last race in October. I only need some rest.”

Elias was sixth and looks set to ruffle the feathers of the factory boys in a big way this year, while Edwards topped Dovizioso, an improving Hayden and Lorenzo to round out the top ten. Both Hayden and Lorenzo have both stated that they’re still adapting to the Bridgestones.

We’ll keep you updated with the final day’s news when we check in on Monday.

American Superbike
Cycle News is reporting that the Rockstar Makita Suzuki team will have to ride their 2008 model GSX-Rs at Daytona due to homologation rules and the new model not yet being available in the States. Check out the story here.

In other news, both Chas Davies and Steve Rapp will be on Aprilia RSV1000s in the Daytona Sportbike class, while Danny Eslick will be on a Buell. These riders will be interesting to watch against the Japanese four-cylinder 600s.

American Supercross
An altercation following last week’s San Fran Supercross has seen bad boy Jason Lawrence suspended by the AMA for two rounds after reportedly getting involved in an incident between Josh Hansen and Steve Boniface in the Troy Lee Designs Honda pit area. The AMA’s release on the subject said:

AMA Racing officials determined today that actions taken by AMA Supercross Lites West Championship Series rider Jason Lawrence at the San Francisco round of the series violated the terms of his existing probationary status, which began on June 12, 2008. Lawrence has therefore been suspended for the next two rounds of the 2009 AMA Supercross Lites West Championship Series.

Specifically, Lawrence was found to have violated Appendix A, section A2.3j, of the AMA Supercross, and FIM World Championship, Rulebook, which states that the following offense is subject to disciplinary action:

“An attack on a racing official and/or engaging in a fight. This includes any person who attacks or is involved in a fight anywhere on the premises prior to, during, or after an AMA Supercross, an FIM World Championship meet. There will be no maximum fine or suspension period for this offense.”

It was determined that Lawrence was involved in an incident off the track involving certain Supercross class riders. As a result of that violation, Lawrence has been suspended for the next two rounds of the 2009 AMA Supercross Lites West Championship Series, including the Feb. 7 round in Anaheim, Calif., and the Feb. 14 round in San Diego, Calif.

AMA officials notified Lawrence of the penalty on Wednesday, Feb. 4. Lawrence appealed and presented evidence in his favor at a meeting with AMA Racing officials on Friday, Feb. 6. Following careful consideration of that evidence, Lawrence’s appeal was denied.

Both Hansen and Boniface were fined after the incident also.

On a more positive note, team TLD Honda rider Jake Moss will be back racing again this weekend just a couple of months after suffering a broken back. Welcome back buddy.

We’ll be back on Monday, have a great and safe weekend of riding everybody.