Bridgestone has released details on the control tyre rules, including how many specifications they’ll have.

MotoGP
Today’s the opening day of the official MotoGP test at Sepang in Malaysia, and it’s set to be a first look at the Valentino Rossi/Casey Stoner battle of 2009. Who is going to be the main man this year is anybody’s guess, although today is going to be the beginning of the battle.

Rossi arrived in Malaysia yesterday using a crutch to aid his walking after receiving stitches this week, but The Doctor still intends to ride throughout the three days – starting later today. He never usually gets on track until around noon at a test, so don’t be too alarmed if he’s one of the final guys to take to the track.

Officials from the leading manufacturers met in Malaysia yesterday, reportedly meeting for over eight hours with no real answer to the rapidly worrying MotoGP cash crisis. Whispers are slowly beginning to do the rounds in Sepang, with the end result seemingly likely that Kawasaki will not be on the grid in any form this season. It seems that Michael Bartholemy will need a miracle to revive Team Green at this point.

One element of this year’s MotoGP season that is sure to be a success is the addition of the Bridgestone control tyre rule, which was controversial in the beginning but is now widely accepted as an improvement for the series. 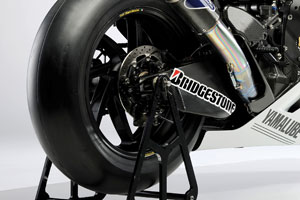 Bridgestone today released details on how the control tyre rules will work, including how many specifications they’ll have and how many riders will have access to on each weekend of the GP season.

Conservation will be the key at most race weekends, especially if a rider prefers one spec much more over the other, meaning we could see some guys do very limited laps in some sessions of the weekend if they’re running low on tyres.

Check out Moto Talk for a full interview from Bridgestone Motorsport Motorcycle Manager Hiroshi Yamada, who offers a very detailed run down of the new rules and the Japanese company’s plans.

American Superbike
Neil Hodgson has topped the AMA Superbike test at California Speedway, setting a very competitive 1:23.9 – almost a second quicker than what he managed last year on a bike that was supposed to be more highly tuned. The Isle of Man resident’s time was narrowly faster than Tommy Hayden’s from yesterday, with the Suzuki team absent today after beginning the test a day early. Could Honda finally be competitive in AMA Superbike? It looks like they may, albeit with a Corona satellite team.

Second quickest was Larry Pegram according to those at the circuit, showing promising form on his 1098R in his return to Superbike racing. He was just ahead of Yamaha’s Ben Bostrom and Josh Hayes, who are taking time developing the new R1 as they were over a second off the pace of Hodgson in these early stages.