Yamaha’s launch of the official factory team was held overnight live on the internet from the team’s base in Italy.

Yamaha’s launch of the official factory team was held overnight live on the internet from the team’s base in Italy, with Fiat-supported riders Valentino Rossi and Jorge Lorenzo both conducting interesting interviews regarding the 2009 season. Both riders are confident, both are on the same tyres for the first time since the Bridgestone control tyre is in for this year, but the dividing wall still remains between their pit areas in the ultra competitive team of world champions.

The launch wasn’t as spectacular as Ducati’s Wrooom event in the snow, although Yamaha is very serious about this season and both riders have the opportunity to take out the world championship if things go according to plan for them.

The major differences for the 2009 Yamaha YZF-R1 visually are the number boards of both bikes, with Rossi’s distinctive yellow numbers a little harder to read on the white background, while Lorenzo switches to the 99 – complete with his usual red colour scheme.

One interesting part of Rossi’s new apparel is the addition of the Monster Energy logo on his AGV helmet, although it’s much smaller than expected considering he is rumoured to be getting around five million dollars to wear the famous Monster claw on his helmet. It will be interesting to see if it grows by the time the opening race comes.

You can bet that the bike is another step ahead of last year’s model performance wise though, with development ongoing over the winter testing ban to meet the riders’ requests from their late season tests and the end of 2008.

The guys have worked on improving acceleration and have changed the geometry of the bike in the time off, with minor developments set to improve what was already regarded as the most well rounded bike on the MotoGP grid.

Check out our Moto Talk section for interviews provided by Yamaha from the launch, and also remember to visit the official MotoGP website for videos of the launch. Interestingly, Davide Brivio also speaks about the team’s desire to do a race in Superbike, even if it won’t happen in 2009.

The pre-season anticipation is almost on the rev limiter at this point as we await the new season, and testing will be our first real insight as to who will be the contenders or pretenders this season. Riders and teams are now in Malaysia at Sepang for the test on 5-7 February, and all are raring to go.

Again it will be interesting to see Nicky Hayden on the Ducati GP9, in Marlboro colours for the first time, and riders like he and Lorenzo will continue their warm up with Bridgestone tyres. All will be gelling with the new control tyres, which are vastly different to last year’s regular race tyres.

The dark horses at this point are the Repsol Honda duo of Dani Pedrosa and Andrea Dovizioso, mainly because all eyes are on the more ‘glamorous’ pairings of Ducati (Casey Stoner/Hayden) and Yamaha (Rossi/Lorenzo). Never count out Honda though as they continue to strive for their first 800cc world title.

In other news, Alvaro Bautista’s solid pre-season has come unstuck after the Spaniard broke his collarbone in testing at Valencia over the weekend. Gabor Talmacsi topped the 250cc timesheets at the wet test, while Julian Simon continued his dominance in the 125cc class.

World Superbike
Rumour of the week: John Hopkins is a very real chance of riding the opening World Superbike rounds for Stiggy Honda to replace the injured Roberto Rolfo alongside Leon Haslam. Sources from Europe and team insiders have said that this is all but confirmed to happen, and I for one, would love to see the American on the grid at Phillip Island in a few weeks. It will certainly re-spark the rivalry between him and former foe Ben Spies, who will be onboard the factory Yamaha. 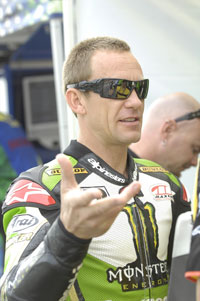 Jamie Hacking has been confirmed as Roger Hayden’s teammate on Monster Energy Attack Kawasaki for this season, competing in the Daytona Sportbike category in the all-new DMG series. Hacking will be one to watch in that championship chase, although you can bet your money that he isn’t happy that he is back in the 600cc class only and missing the chance to battle for the Superbike title against Mladin and co. There’s a teams test at California Speedway this week so we’ll have to keep an eye out how everybody is developing to their new rides in light of the controversial new rules and classes.