Gresini could have a private title in 2010

Proposals have unofficially been revealed for MotoGP’s next two seasons, with GP One reporting that the 2009 season is set to implement new rules to cut costs before 2010 will see even stricter rules brought in to assist teams in reducing costs.

We knew that the rules were being put into effect, although more information has filtered through.

It is believed that teams will be limited to using just nine engines for the season this year, with practice and qualifying sessions reduced from 60 to 45 minutes in order to help teams stretch their engine life.

Winter testing this year will also be reduced to just eight sessions, giving teams less opportunities to get their bikes set up for the new season. Post race testing on the Mondays after races will also be banned.

It’s suggested that in 2010 the grand prix schedule will be reduced from 18 to 17 rounds, and that grand prix events for the MotoGP category may be reduced to two day events – while the 125s and 250s will remain three day events with practice sessions on Friday afternoons.

Engine life will be extended to three GPs, with teams forced to utilise the same engine for those races or face a time or grid position penalty if the engine is changed before the three races are complete.

Meetings between Dorna chief Carmelo Ezpeleta and the manufacturers are ongoing, with these proposals the most significant in a long list of plans to help ensure the future of motorcycle racing’s premier class.

The MotoGP World Championship could also implement an all-new championship in 2010, specifically designed for the private satellite teams that would run in conjunction with the current series. Ezpeleta is planning a separate world championship for the non-factory satellite teams, although the teams would continue to compete in the same race as the factory teams.

It is believed that a satellite world championship would allow teams to attract greater sponsorship dollars if they were battling for their own championship, with private equipment standing next to no chance of taking out the MotoGP series since the factory teams develop their bikes throughout the season.

Teams such as the Gresini Honda, Tech 3 Yamaha, and Ducati Alice would compete for their own podium ceremonies and championship points, ensuring maximum exposure to almost every team on the grid and not limiting it to the dominant factory squads.

Another rule that would be enforced would be that rookie riders aren’t allowed to go directly to factory teams, which would instead force the likes of reigning world champion Marco Simoncelli into the satellite teams – giving those teams the opportunity to compete with top level riders.

These are interesting times for MotoGP and crucial for the direction for the sport.

Yamaha is due to launch its 2009 MotoGP team online tonight, with expected debuts of Valentino Rossi wearing Monster Energy decals on at least his helmet, and Jorge Lorenzo’s new number of 99. The easiest way to see any of the happenings at the launch is via the series’ official website at MotoGP.com. 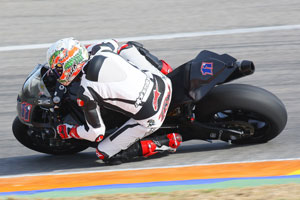 Corser has been testing with BMW

Troy Corser and his factory BMW Superbike World Championship team took part in a two day test at Valencia last week, with the former double world champion setting laps in the 1:36 range — comparable lap times to what he had done on the Yamaha last season. Teammate Ruben Xaus also did 36s at the test, signalling that the bike is improving rapidly as the season approaches.

Interestingly, in the team’s press release following the event Troy stated that he wouldn’t mind if the first race was tomorrow, meaning that he must be confident in his equipment event in these early stages. He’s going to have to be comfortable, because round one is coming up in just a few weeks time.

American Superbike
Cycle News is reporting that Neil Hodgson will compete aboard an American Honda prepared Corona Honda in the AMA American Superbike Championship, which would effectively mean that Honda hasn’t pulled out of the US Superbike series completely. It’s believed that Hodgson’s bikes will be prepared at American Honda and the team will be based from their workshop, with his crew from last year working the spanners in the pits. It’s an exciting prospect since Hodgson lapped fastest at the Daytona tyre test in December.

After a disappointing DNF at round one, Stewart has gone on a tear, pressuring Reed, who has struggled to maintain the pace of his arch rival at the most recent rounds. After looking so confident and comfortable in early rounds, Reed seems to be falling back a little at the moment. A crash in practice on the weekend didn’t help his progress.

Reed finished second in San Francisco ahead of rookie Ryan Villopoto (Monster Energy Kawasaki). Aussie Daniel McCoy (Moto Concepts Honda) made his first main event of the season to finish 15th. This will be a massive confidence booster for DMC, looking to learn the ropes in the ultra strong 450cc class.

The series now moves on to Anaheim, California, for the third time of the year on 7 February.