Casey Stoner seems to have gotten the bug for Karting fresh off his victory on ice over Felipe Massa at Wrooom. 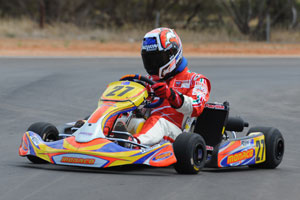 Casey has been Karting again

Former MotoGP World Champion Casey Stoner seems to have gotten the bug for Karting fresh off his victory on ice over Felipe Massa at the recent Wrooom event in Italy, with pictures leaked of Stoner testing a Monaco kart at a secret location (thought to be in South Australia) this week. Casey was snapped wearing a very trick Alpinestars car racing suit that is similar to his Ducati Marlboro race leathers. Is there a four-wheel future for Casey, too?

Suzuki’s Paul Denning has gone on the record with MotoGP.com stating that the series needs changes to reduce costs, and fast — the latest in team bosses to request changes for the crumbling series.

“I think there need to be some fairly fundamental, sweeping changes, to take a decent percentage out of the costs, in order to make the decision making process easier for manufacturers and teams, for participation and making it more attractive to provide further bikes and expand the championship in the future,” Denning explained. “That has to be the ultimate target.”

Australian Superbike
The Yamaha FZ6 Masters Cup has been confirmed as starters in the Australian Superbike Championship once again, the one make class returning after mysteriously going missing from the series Supp Regs. The news has been announced by both the series organiser, International Entertainment Group, as well as Yamaha Motor Australia so it’s a certainty that it will be a starter – we think!

Four rounds on the ASBK calendar have been confirmed for the FZ6 Masters, being Rd1 at Symmons Plains, Rd2 at Queensland Raceway, Rd4 at Eastern Creek and Rd7 at Calder Park. The opening round at Symmons Plains will be stand alone and the remaining rounds will share track time with the newly introduced Woman’s Nationals series. “We must look to develop classes with potential not only to become self sustainable but also offer IEG as the series promoter a draw card to attract spectators and sponsors,” said IEG director Yarrive Konsky.

IEG also sent out a reminder today that they are holding a two day test at Phillip Island on 4-5 February next week. Entry forms can be found at www.asbk.com.au.

American Supercross
After the disappointment of last week’s performance in AMA Supercross, Rockstar Makita Suzuki’s Chad Reed is eager to make amends and take his first victory of the season this weekend in San Francisco, California.

While no other rider has been able to match his lightning-fast lap times, a series of first-corner incidents have left Reed languishing mid-pack or worse and faced with a tough fight back. Siding with a consistent approach has paid dividends however – Reed still leads the title chase by a handy 9 points after four rounds.

“I’m not getting the starts I need to at the moment so it’s even more important that I ride hard and smart once the race gets underway,” said Reed. “I’m pushing as hard as I can, trying not to make mistakes. Points are very important at this stage of the championship and the consistent approach is working very well.

“I’m as fit as I’ve ever been and know that if I can find a good rhythm early I will be hard to beat to the chequered flag. This year’s field is one of the best yet – there’s a lot of guys out there with something to prove. In saying that, Rockstar Makita Suzuki is on top of its game and there’s no other team I would rather defend my title with.”

It’s going to be an amazing season in 2009, let’s hope that the Aussie can go on to capture his third title this season.