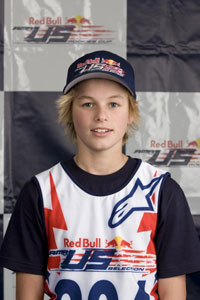 Hook will be in the Red Bull MotoGP Rookies Cup

Australia will have three riders in the Red Bull MotoGP Rookies Cup this season, with Josh Hook confirmed to be joining Dylan Mavin and Arthur Sissis on the grid after it was announced by Red Bull overnight.

The 16-year-old from Taree in New South Wales was originally destined for the American-based Red Bull AMA U.S. Rookies Cup until it was cancelled in January, although his performance in the U.S. trials was enough to catch the eye of 1993 500cc Grand Prix World Champion Kevin Schwantz.

Along with three American riders, Hook has been transferred into the European series which races at six rounds of the MotoGP World Championship, giving him the opportunity of a lifetime after Schwantz recommended him.

“To learn that I was selected to compete in the Red Bull MotoGP Rookies Cup was just unbelievable,” said Hook. “I am really grateful and honoured that the selection committee believed in my potential to be successful and I can’t wait to get on the track at the first test in Estoril.”

The Red Bull MotoGP Rookies Cup will have their first test at Estoril in Portugal on 26 March, before the season officially gets underway at Jerez in Spain on 2-3 May.

Now I’m a big fan of Josh and his talent, working with him and his parents with my Road Race Performance Academy, and this truly is a great achievement for a kid who only had his first road race less than one year ago.

In premier class news, British MCN have revealed that there could be penalties for teams that have to change engines within the engine restriction period next year, when it’s believed that teams will be forced to run the same engine for two or three races. It’s yet to be decided if it’ll be a qualifying grid position penalty or points loss in the race.

World Superbike
An interesting fact of the recent World Supersport test at Portugal was that Hannspree Ten Kate Honda’s Andrew Pitt tested Kayaba suspension on the final day, with the dominant team’s relationship with WP on the verge of ending in 2009. The interesting thing here is that the move will probably also happen in the Ten Kate Superbike team, too, which is surprising since the usual favourites in SBK are Showa and Ohlins suspension. Kayaba is very successful in Supercross and Motocross though, so Ten Kate may be on to something by opting for an unusual supplier in SBK racing – as was WP.

Australian Superbike
It looks as though MV Agusta will field a team again in this year’s Australian Superbike Championship, with Trinder Brothers Racing speculated to be in talks with Judd Greedy and/or Shannon Johnson for the season. After a strong development season last year, MV could be the big improver if they do in fact join the grid again. The team was originally set to close shop due to the originally planned 10 round series being too expensive, although now it’s down to seven then it’s suddenly a viable option again. Greedy is believed to be testing the bike next week, while Johnson denies any contact or association with the Italian squad.

American Supercross
Word from the USA this morning is that Daniel McCoy will likely move to the Lites class in the remaining rounds of the East Coast Supercross series, stepping down from the 450 on his Moto Concepts Honda team. It’s a tough world in the American Supercross scene, and it looks like a pretty smart move considering the depth of the 450 class this year. Still settling into life in the USA after arriving only three weeks before Anaheim, McCoy could surprise in the Lites field.

Great news of today is that Jake Moss is well on the road to recovery after his back injury last year, with a video uploaded onto Racer X Films of him testing with his Troy Lee Designs Honda teammates today. Check it out here. Townley is on the mend

Some news that isn’t so good is that Kiwi Ben Townley is still suffering from a shoulder injury, and will remain on the sidelines for an unknown amount of time at this stage. Here’s the press release from Honda Red Bull Racing:

American Honda announced today that Honda Red Bull Racing rider Ben Townley’s return to competition will be delayed due to rehabilitation complications. Honda Red Bull Racing team manager Erik Kehoe stated, “Ben has been training on his CRF450R for about a month and continues to have difficulty with his shoulder. He is working with Red Bull’s elite athlete training staff and will be meeting with several shoulder specialists to identify the cause of the problem and choose the best course of action to expedite his recovery. Our goal is to make sure he is 100 percent before he returns to racing.” It may be several weeks before Townley can establish a course of action for treatment. American Honda will provide additional details when they are available.