Aspar Aprilia rider Alvaro Bautista was fastest on the second day of the 250cc and 125cc GP test at Jerez in Spain. 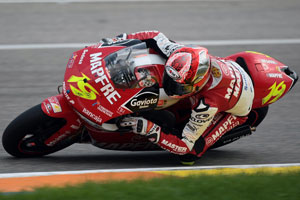 Bautista has been fast in testing

Aspar Aprilia rider Alvaro Bautista was fastest on the second day of the 250cc and 125cc GP test at Jerez in Spain, lapping six tenths of a second quicker than on day one with a 1:43.673 – almost quick enough to match Marco Simoncelli’s lap record at the circuit. Hiroshi Aoyama was next quick as he settles in on the Honda, while former 125 World Champion Gabor Talmacsi was third quickest. Fastest 125cc of the day was again Julian Simon, who topped Aspar teammate Bradley Smith to lead the timesheets for the second day in succession. It looks like it will be a solid year for Aspar, even without a MotoGP team at the moment.

World Superbike
Following the test in Portugal that was partly rained out, World Superbike newcomers Aprilia and BMW have scheduled a test at Valencia in Spain this week on Wednesday (tonight, Australian time) and Thursday. Troy Corser was pretty competitive on the BMW at Portimao, although it seems his teammate Ruben Xaus has quite a long way to go as he continues to familiarise himself with a four-cylinder again. The Aprilia boys weren’t up front on the time sheets in Portugal, but it’s certain that Shinya Nakano can set good times at the circuits he knows (ex-GP tracks).

Australian Motocross
Speaking of the Australian MX Nationals, there’ve been a few interesting announcements today regarding the direction that the series is heading. Firstly, an exciting new range of formats have been introduced to raise the interest for spectators (similar to what was tried with Super X last year), and they are as follows:

Another interesting new concept is the adoption of career numbers for both Motocross and Super X, which is similar to what they do in the USA where the likes of Chad Reed has number 22 for his career, while James Stewart has number seven, and so on. It will be interesting to see if riders opt for top 10 numbers over here, as they do in the USA, because over there you need to be at least a national champion to earn a number in the top 10.