Reigning BSB champ Shane ‘Shakey’ Byrne has continued his impressive start to his World Superbike career, setting the pace at the first official test of 2009. 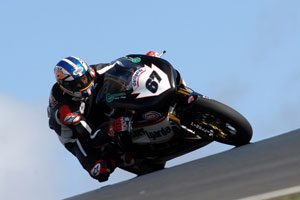 Byrne lead the way at Portimao

Reigning British Superbike Champion Shane ‘Shakey’ Byrne (Sterilgarda Ducati) has continued his impressive start to his World Superbike career, setting the pace at the first official test of 2009 at Portimao, Portugal, over the weekend.

Rounding out the top five in the rain-affected test was Spanish rider Carlos Checa (Hannspree Ten Kate Honda), while the remainder of the top 11 all finished within a second of Byrne’s laptime — setting up one of the most competitive years ever in SBK.

Top Australian was Troy Corser in 11th on his all-new BMW, an impressive showing considering his teammate Ruben Xaus was 25th and almost two seconds per lap off the pace of Corser. Corser and BMW’s competitiveness was also highlighted by Aprilia’s struggles, with Shinya Nakano 17th and Max Biaggi 18th on the new RSV4 — which is the other brand new bike on the SBK grid.

Second fastest Aussie for the test was Broc Parkes (PBM Kawasaki) in 15th position overall, making his return to Superbikes after a long career in World Supersport. The Final Aussie was Superstock champion Brendan Roberts (Guandalini Ducati), 19th in his SBK debut.

Selected teams will now head to Phillip Island in Australia for private testing before the season opener on February 27-March 1.

The big surprise so far is the speed of the rookies, shaking up the SBK establishment already in the early days of their world championship careers. Both Byrne and Spies are champions in their own countries against great competitors, so it’s no surprise that they are so fast right away. Haga was impressive on the Ducati

Also not to be overlooked is Haga’s form on the Ducati. Those bike’s aren’t easy to adapt to straight away, but Nori-san is already on the pace and looking set for a stellar season on the Italian machine under the guidance of Davide Tardozi.

Island Classic
1987 500cc Grand Prix World Champion Wayne Gardner won the Island Classic International Challenge at Phillip Island on the weekend, beating the likes of Malcolm Campbell, Robbie Phillis, and even young British Superbike racer David Johnson to take out the 16th edition of the event. Gardner was mounted on a 1980 model Honda CBR 1100 for the event, although the lap record was taken by Campbell on a 1980 Suzuki RG500 with a 1:41.953.

Reed got another bad start in what has been his downfall so far in the 2009 season, admittedly struggling to make his way forward through the field until he eventually settled into second position almost 10 seconds behind his arch rival.

“I felt good all day,” said Stewart after the race. “I knew it was going to come down to the start. I love it here in Texas so I would like to say thanks to all of [the fans]. It was all good clean racing tonight, especially with Villopoto. I had a great line over in the whoops and it all just worked out tonight. Every week we get better and my San Manuel Yamaha is working great.”

While Stewart is gaining momentum, Reed is suddenly caught on the back foot, although don’t count him out just yet. He hasn’t opened his win tally yet in 2009, but he is the most competitive we have seen him in a very long time.

“That was tough, those first few laps,” explained Reed. “I had to be smart and keep it up. It was tough racing tonight. James is riding great and I wish I could get better starts to make it better for the fans. I want to thank my whole team at Rockstar/Makita Suzuki for everything they do. It was a good race for us.”

The season is just getting started, sports fans!

Dan McCoy didn’t make the main event on his Moto Concepts Honda, although he continues to improve each weekend and is sure to be in there for the 20 laps within the next couple of weeks.

Frenchman Christophe Pourcel (Kawasaki) won the first round of the East Coast regional Lites series ahead of Aussie Brett Metcalfe (Honda) and Nico Izzi. Metty was on the gas all night, winning his heat and then fighting back to catch Pourcel in the main event, only to lose by just 1.346 seconds in the end.

Word also came through on the weekend that West Coast Lites rider Jason Lawrence will be riding a 450 in the rest of the East Coast rounds, which is a move that could really create fireworks in what has already been a fascinating season in Supercross. If JLaw can adapt to the 450 anything like Josh Grant has this year, we are in for a good show.