Honda will keep its strong presence in motorcycle racing’s premier class, despite ongoing speculation that they were considering scaling back following their F1 pullout. 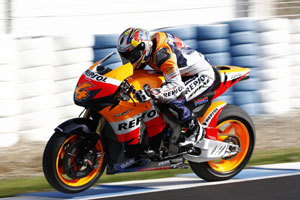 Dovizioso is safe at Honda

Honda’s Repsol-backed factory MotoGP effort will definitely remain as prominent as ever in 2009, as will its support of the Gresini, Team Scot and LCR teams, making a total of six RC212Vs on the grid again for this year. As expected, Honda will keep its strong presence in motorcycle racing’s premier class, despite ongoing speculation that they were considering scaling back following their shock Formula One pullout.

It’s safe to say that Honda will in fact be tightening its budgets in an effort to reduce costs in some areas, but these changes will be more in the way that the teams are run behind the scenes and won’t necessarily be noticeable as we watch the likes of Dani Pedrosa and Andrea Dovizioso try to match Yamaha’s Valentino Rossi and Ducati’s Casey Stoner.

Now that reigning 250GP World Champion Marco Simoncelli isn’t competing in any of the opening World Superbike rounds with Aprilia, attention has switched to his future in MotoGP. A close friend of Rossi, sources in Europe have said that Simoncelli is desperate to get on a factory bike as soon as he enters the premier class. He’ll have a good chance of getting on a factory bike if he’s two times 250 world champ after this year, but with his preferred teams Yamaha and Ducati already fielding dream teams, it will be hard for them to slot him in.

When a rider of Simoncelli’s calibre is going to find it hard to land a factory seat in MotoGP it really shows the depth of talent in the class right now. The new generation has arrived.

Speaking of new things, if this week’s heavily rumoured deal with Monster and Rossi actually comes to fruition, what is going to happen to The Doctor’s famous helmet paint schemes? For the millions of dollars that Monster is believed to be paying, surely they will get the Monster claw on his entire helmet. Keep an eye out.

The Superbike World Championship has been officially launched in Portimao, Portugal, ahead of this weekend’s official test, and it seems that Infront Motorsports (formerly FG Sport) is really playing off the fact that they have been able to attract seven manufacturers for the series – resulting in a massive 32 bikes on the grid in 2009.

This year’s calendar will feature 14 rounds in five continents, including a return to South Africa for the first time since 2002 at the Kyalami circuit. The championship kicks off at Phillip Island on 1 March and concludes on 25 October at the Portimao circuit.

The main changes in Superbike this year include a switch to ‘flag-to-flag’ (a change of bike is allowed in case of rain during the race) and the new elimination Superpole format for the top 20 riders in qualifying.

Flag-to-flag racing is what they have been using in MotoGP for the last few years, essentially eliminating the red flag in case of rain and allowing the riders to return to the pit area to switch to their spare bike (fitted with wet weather tyres and suspension settings). It’s not required that you come in to change bikes if it does rain though, and sometimes if it’s a light sprinkle it’s best to gamble and stay out on slicks and continue circulating. It will add excitement to the mixed weather races.

As we mentioned on here the other day, the new Superpole format is an elimination format similar to F1’s, which will be for the top 20 riders after the two qualifying sessions instead of 16. The new Superpole will consist of three elimination stints of 12 minutes each, with two seven minute breaks between, making up a total session time of 50 minutes. The slowest four riders will be eliminated after the first stint, and eight after the second, leaving the top eight fastest riders to compete for pole in the final stint. This is another positive direction for the ever popular SBK series.

Check back on Monday for the full rundown of Portimao’s official test.

American Superbike
I had a quick chat with Roger Hayden today regarding his ride on the new Monster Energy Attack Kawasaki team, and although he’s disappointed not to be riding in the Superbike class on the ZX-10R this year, he’s still excited to be on the all-new ZX-6R in the Daytona Sportbike category.

Rog told me that after the year that he had this year (which he sat most out with injury), a year focussing on the 600 won’t do him any harm and he’s aiming to reclaim his 600cc crown from 2007.

American Supercross
The AMA Supercross series will be making its fourth stop on the calendar this weekend as it visits Houston, Texas, to continue the epic battle between Australia’s defending champion Chad Reed and former champ James Stewart.

Tomorrow night’s event will also see the first round of the East Coast regional Supercross Lites series, which takes over from the West series for this weekend. The series could basically be anybody’s, although we’ll be gunning for South Aussie Brett Metcalfe (GEICO Powersports Honda), who enters the series as one of the favourites in his official debut for Honda. He’ll have stiff competition in Austin Stroupe (Monster Energy Pro Circuit Kawasaki), rookie Blake Wharton (Geico Powersports Honda), Will Hahn (MDK KTM) and Nico Izzi (Rockstar Makita Suzuki).

“Everything with the GEICO Powersports Honda team and myself is going great,” Metcalfe said. “The CRF250R is a great bike and can’t wait to race it at the opening round of the Supercross East Lites Championship this weekend. The competition is going to be strong but I have confidence in my ability to be up front.”

One rider who won’t be at Houston is MDK KTM’s Travis Preston, who injured his finger in a heat race accident at Anaheim last weekend. It’s expected he’ll be off for about two or three weeks before returning to the saddle.

Aussie Dan McCoy has had a good week of practice this week, riding at the Red Bull Compound and gelling with his bike more each round. McCoy only arrived in the USA just weeks before the opening round, so expect him to continue to progress throughout the season.