Fonsi Nieto could be back aboard a Suzuki GSX-R1000 in World SBK this year in a private deal run by the factory Alstare squad.

MotoGP
Italian Marco Melandri was supposed to know his fate for this year’s MotoGP World Championship yesterday, but so far that news hasn’t been released to the public. A big revelation came in the form of former private MotoGP team Ilmor being interested in assisting Michael Bartholemy with engineering if he lands the Kawi satellite deal.

British MCN broke the news, with Ilmor managing director Steve Miller confirming their interest in the project – which would see them supplying numerous technical parts in the development of the 2009 model ZX-RR.

For those who don’t remember, Ilmor was actually the first company to compete in MotoGP with an 800cc – taking part in the final races of the 990cc era in 2006 with Garry McCoy at the helm. The team then entered the 2007 season with Andrew Pitt and Jeremy McWilliams, but was forced out due to a lack of funding following just one race into the season.

The successful engineering company, which has been successful in four wheel racing, was founded in 1984, and may just be the ideal technical partner for Bartholemy’s Kawasaki satellite squad if the deal comes to fruition. They would want to start working quickly though.

Other news circulated today that Aspar team boss Jorge Martinez has abandoned plans to run the Kawasaki satellite team, preferring to concentrate on his current 125cc and 250cc operations because Kawasaki couldn’t offer a long term deal with factory support. It’s probably a smart move by Martinez, with his team (and its Spanish sponsors) likely to step into MotoGP within the next year or two with a more competitive manufacturer.

MotoGP.com is reporting that Sete Gibernau has been in the Pyrenees, training for his comeback to the championship with the Onde 2000 Ducati team. Sete received surgery in the off-season to remove a plate in his collarbone, and it will be interesting to see if he can return to his old form in what is an ultra competitive field for 2009 with plenty of determined young guns. 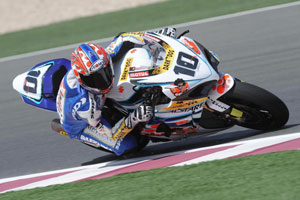 Nieto could be back in SBK on a Suzuki again

Kawasaki’s factory-supported World Superbike team run by Paul Bird Motorsport has secured a lucrative deal with Supercasino.com for 2009. In a press release issue by PBM this morning, it said that Super Casino is owned by Martin Higginson, who was the man behind Bird’s long-term association with Monstermob. In a difficult time for motorsports (especially Kawasaki), it’s great to see a new outside industry sponsor join one of the leading teams. The team will make its public debut with new SBK rider Broc Parkes and Makato Tamada at Portimao’s SBK test in Portugal this weekend.

In other WSBK news, Stiggy Motorsports Honda rider Roberto Rolfo is against it before the season even begins, suffering from a damaged shoulder that looks like it will require surgery soon or later. Rolfo will see how he is going at the Portimao test this weekend before deciding if he should opt for surgery or not.

The Portimao test will also be a first chance to try out the Superpole ‘knock-out’ format. After the Friday, Saturday and Sunday morning sessions, the top 20 will go on to try out the new format in the final afternoon.

Crash.net is reporting that Fonsi Nieto could be back aboard a Suzuki GSX-R1000 this year in a private deal run by the factory Alstare squad. Nieto is a fan favourite in Spain and is likely to take considerable sponsorship dollars to the team. 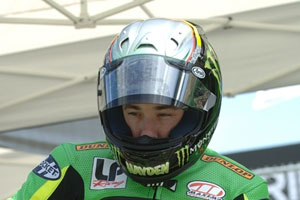 Kawasaki has officially pulled out of American Superbike racing, instead joining forces with the Attack Kawasaki satellite team to form the official Monster Energy Attack Kawasaki team. Roger Lee Hayden has been confirmed as a rider on the team, which will only compete in the 600cc Daytona Sportbike class with the ZX-6R. The second rider isn’t confirmed at this stage, although Hayden’s 2008 teammate Jamie Hacking should be a favourite after reportedly turning down a ride with Yamaha. The only team which hasn’t committed to racing yet is the Yoshimura Suzuki team, although it’s expected that they will be back with Mat Mladin, Tommy Hayden and Blake Young – all in the 1000cc American Superbike category.

American Motocross/Supercross
Ricky Carmichael has landed a drive in the NASCAR Camping World Truck Series with support from Monster Energy drink to drive for Daytona 500 winner Kevin Harvick’s team. The motocross legend will drive the number 4 Monster Energy Silverado for the KHI All-Star Team in at least 14 truck events and also drive a Monster Energy Chevrolet in the season-opening Automobile Racing Club of America (ARCA) race at Daytona.

“Monster has been a sponsor of mine since 2005,” said Carmichael. “So it’s really an honor to bring them into the Truck Series with me and KHI. This is an opportunity I’m really excited about. I think this is my best shot to learn and the best chance to become a successful NASCAR driver. I’m going to give 110 percent to make it worthwhile for myself and the entire team.”

Carmichael finished sixth in points in his rookie season in the NASCAR Camping World East Series, driving for Ken Schrader Racing last year. In 13 starts, Carmichael had three top five and eight top 10 finishes, with one pole position. Carmichael drove one race for KHI in 2008, running among the top five in the ARCA race at Talladega before a blown right-rear tire knocked him out of the race.