There will be a total of six rookies in the Superbike World Championship this year, including Aprilia's Shinya Nakano.

MotoGP
The hottest topic in MotoGP right now is Kawasaki’s participation, or lack of, in this year’s world championship. Will they, or won’t they? At this stage it seems they might, and the greatest indication yet came yesterday when they cancelled the opening day of their Phillip Island test. The MotoGP testing ban takes place from 1 December 1 to 20 January – meaning they would have been breaking the regulations if they had tested at the Island yesterday.

The next time we do see the regular teams testing will be at Sepang in Malaysia on 5-7 January. All eyes will be on the new Ducati pairing of Casey Stoner and Nicky Hayden, but my eyes will be on Hayden in particular. He has shown promise in the two tests he has completed so far on the Ducati Desmosedici, but the new year is here and it’s time for him to get down to business.

Being within a second or two of Stoner won’t be good enough — he needs to be on the pace from now if he is to stand a solid chance of reclaiming his 2006 title. I wouldn’t put it past the Kentucky Kid, though. He’ll also be looking to get more laps on the Bridgestone tyres in the process.

On the other hand, Stoner is a proven success on the Desmosedici. The only question mark on his season is his left wrist, which he received surgery on late last year. Doctors are confident that the surgery was a success, but we truly won’t know until Casey climbs aboard the GP9 and rides it in anger for the first time this year. 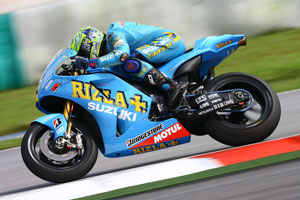 Vermeulen will be hoping for improvements from Suzuki

If Stoner or Hayden are to claim the title again they are going to have to topple reigning champ Valentino Rossi and his formidable Yamaha YZR-M1. This year’s M1 is completely different to last year’s, meaning this upcoming Sepang test is going to be very important for all to get off on the right foot.

Let’s hope that Suzuki makes improvements again this year and can challenge the likes of Yamaha, Ducati and Honda, allowing Chris Vermeulen and Loris Capirossi to challenge for victories and podiums like they are capable of.

It’s also important that Suzuki can be competitive to ensure their future in the sport. Results speak loudest when it comes to enjoyment and involvement in sports, so it’s important that the company feels they are getting return on their investment. If we were to lose Suzuki from MotoGP along with Kawasaki it would be a massive blow to the series. 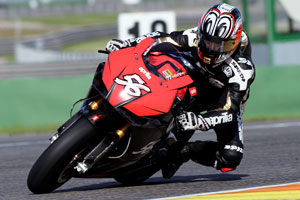 Shinya will be an experienced SBK rookie

So who is going to be rookie of the year? Some believe there might even be a rookie Superbike champion.

Australian Superbike
We were able to get in touch with reigning Australian Superbike Champion Glenn Allerton this afternoon, who gave us the lowdown on the Motologic Honda test at Winton in Victoria. T test ran on Monday and Tuesday this week, with Allerton posting a very impressive 1:22.1 – just shy of Jamie Stauffer’s lap record at a high 1:21. New Honda Superbike rider Wayne Maxwell reportedly posted 1:22.3 lap times, so he is on the pace too. Allerton said that they made suspension changes throughout the test, eventually finding an improved setting considering the heat. That should help out if it’s hot at Phillip Island’s opening round in just over a month’s time.