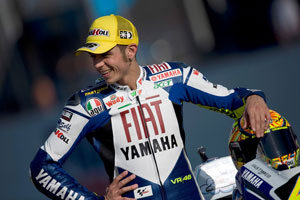 Will Rossi wear Monster logos on his hat soon?

Word has rapidly spread that MotoGP World Champion Valentino Rossi has inked a lucrative deal with Monster Energy Drink (which isn’t yet available in Australia), essentially taking the sponsorship from Kawasaki and John Hopkins.

It’s believed that The Doctor will be paid almost $5-million to wear the popular Monster claw on his helmet this year and next, a move which will boost Monster’s popularity even more in the world of motorcycle racing. It’s also said that Rossi will be paid around $1-million as a bonus if he wins the title.

Monster currently sponsor many Kawasaki teams around the world, particularly in the USA, as well as many individual riders in a bid to match leading energy drink supplier Red Bull. Monster also sponsors the factory Yamaha world motocross team, and has naming rights to the American AMA Supercross Championship.

Marco Melandri may be on the sidelines for now since Kawasaki announced the suspension of its MotoGP program, although if a satellite team doesn’t take shape he is prepared to sit on the sidelines for a season according to Auto Sport. Rumours of the satellite team have stalled for now, although there’s still a great possibility that either Jorge “Aspar” Martinez or Michael Bartholemy will take over the team of ZX-RRs.

It’s speculated that the 2009 version of Kawasaki’s GP contender is quite an improvement, although it’s very likely that every other manufacturer would have improved over the off-season too. It’s expected that a decision regarding the Kawasaki satellite team will be made as soon as tomorrow.

Kawasaki’s test team is now headed to Phillip Island to test for another few days before heading back to Japan. 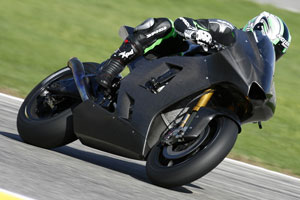 Melandri is prepared to sit out

Another interesting report today has been posted on British MCN’s website, this time in regards to the speculated MotoGP salary cap that could dictate how much the top riders get paid in order to save teams and manufacturers money.

Casey Stoner doesn’t think that the salary cap will actually happen, with many industry insiders aware that such a rule would be very difficult to manage in motorcycle racing due to the many personal sponsors and contracts that riders attract.

Besides, the money that most of the riders earn is peanuts compared with what the teams spend on certain other things throughout the season. I’m sure that Yamaha’s investment in Valentino Rossi back in 2004 has been worth every cent for what was then a struggling manufacturer in the premier class.

Australian Superbike
Information on Yamaha’s Superbike test at Phillip Island last week came through today as I spoke to team members at Yamaha’s 2009 R1 launch at Eastern Creek, and it looks like YRT is already on the right track in the early stages.

Word is that two times Australian Superbike Champion Jamie Stauffer posted a 1:35 laptime on a relatively stock bike fitted with a set of aftermarket exhausts. To put that time in perspective, Jason O’Halloran’s lap record is a 1:32.921.

Honda also wrapped up their test today at Winton, although laptimes haven’t come through yet at this stage.

ASBK series boss Yarrive Konsky called last night, confirming that the Aussie Racing cars will in fact be at one round of the series this year – most likely Calder Park’s final round. Konksy is confident of the series going ahead and being a success, although he did acknowledge that it hasn’t been easy getting it to this point.

Australian Off-Road
Kawasaki has announced its team for the Australian Off-Road Championship for this year. The MSC Kawasaki Off Road Race Team will feature 14 times ISDE competitor Damian Smith and Supercross/Motocross racer Toby Price on the team’s KLX450R and KX450F respectively. Riding on the team’s KX250F will be 18-year-old Josh Green. The series is shaping up nicely with factory-supported involvement building every year. Check out www.dirtbikepromotions.com.au for the series’ official website.

Dakar Rally
We received a press release from Aussie Dakar racer Dave Schwarz last night, explaining his demotion in the results at the Dakar race in South America last week. Here are some excerpts from Schwarz’s release:

South Australia’s Dave Schwarz finished the 30th Historic Argentina-Chile Dakar event in 36th overall position. If it wasn’t for a controversial penalty, involving a non GPS recording of a check point on the difficult Stage 13, the result would be much different.

Schwarz said this check point was added after the change of the stage on the morning and it was positioned only two kilometres also from the end of the day’s stage. Schwarz was travelling with a car who’s GPS marked the point, but his didn’t and couldn’t figure out why.

Due to earlier Stage 5 and fighting of another GPS nav error which resulted in a four penalty handed out, the official’s reviewed and found in favour and reversed their decision and put Schwarz back to his correct overall race position of 19th.

So concerned that his GPS was still playing up, Schwarz got the car drivers who were present to sign a document and the FIM French Official at the check point to state that he in fact was there. Dave was guaranteed by the FIM French official that he will inform the organisers at day’s end and get the matter sorted. The official flatly did nothing, and a four hour penalty was imposed.

The Schwarz camp, support team and other competitors who were aware of the situation tried all well restrained diplomatic avenues to no avail.