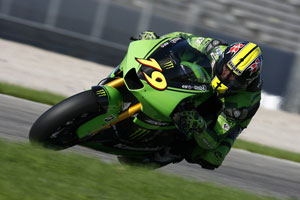 Jacque was fast at the Creek

Last week’s Eastern Creek test for Kawasaki’s MotoGP test team was a considerable success, wrapping up on Saturday afternoon following two hot and humid days on track. It was a success because Olivier Jacque apparently posted a 1:26 laptime, which is around four seconds faster than Alex Criville’s 500cc Grand Prix lap record of 1:30.3 from 1996! Considering OJ’s times, imagine what the likes of Vale Rossi and Casey Stoner would do these days.

Stoner actually won the race, beating out Massa to the line, while Hayden finished fourth behind Badoer. According to Cycle News magazine’s Henny Ray Abrams, Stoner said before the event that it was only the second time he’d driven a go kart and the first time on ice. Nice work!

World Superbike
The Superbike World Championship will kick off its first test this weekend on 23-25 January, with most teams taking part in the official test at Portimao in Portugal – venue of the final World SBK round from last season.

In fact, there’s only just over one month remaining until the season opener at Phillip Island on 27 February-1 March. It’s hard to call a favourite at this point, but judging by the entry list it seems this season will go to the man who wants it most.

Australian Superbike
The Australian Superbike Championship could have Aussie Racing cars at selected events this year if a plan falls into place. A deal could be sparked to include the Aussie Racing Cars Super Series alongside the ASBK this year, introducing a completely new spectacle that could attract new fans to our sport. The Aussie Racers are very popular in the four-wheel world, although the deal isn’t confirmed at this stage. Check out www.aussieracingcars.com.au to get the lowdown on the mini racers.

While it would be a new way to attract fans to Aussie Superbike races, the only concern is if the cars drop a wheel in the dirt and put debris over the track, which could prove costly for some riders if they happen to hit some dirt that’s been flicked up on the racing line. We’ll wait and see.

Honda has been testing at Winton in Victoria today, with Glenn Allerton and Wayne Maxwell reportedly doing 1:23s in the early stages of the test. The temperature is at around 40 degrees Celsius, so it’s quite a bit warmer than race conditions of the ASBK season. Also on hand are a fleet of Honda satellite riders, with everything from Superbike to Superstock 600 gaining support in one way or another from Motologic.

I spoke on the phone to Paul Free this morning regarding Honda’s withdrawal from the series, and he was confident that the team could continue its championship-winning form in 2009.

“It’s not the ideal situation with Honda pulling back, but they are still supporting us and we are moving forward the best we can with the tools that we’ve got,” said Free.

“In one sense it has probably made it a little bit more difficult to gain sponsors, but in another sense it may make it a little easier because we can now offer sponsors complete naming rights to the team,” Free explained.

Here’s a quick rundown of the ASBK teams for 2009:

The final name on that list is to be confirmed, as Johnson and team owner Greg Epis were trying to switch to AMA Superbikes, although that deal now doesn’t look likely to go ahead. Anaheim 2 marked the third round of the Monster Energy AMA Supercross, an FIM World Championship, series, which was yet another thriller in what has been a sensational year of action to date.

Reigning champion Chad Reed (Rockstar Makita Suzuki) took over the series lead on Saturday night following a courageous fight back from the rear of the field..

An opening lap incident had put Reed back to 19th position at the end of the opening lap before he put on a spectacular ride to climb all the way back up to second position behind arch rival James Stewart (L&M Yamaha).

Reed closed the gap to Stewart from over 15 seconds down to just over three as they crossed the stripe, while veteran Kevin Windham (Geico Powersports Honda) rounded out the podium.

“I was somewhere in the top five off the start and someone took me out,” Reed said. “Really, I just tried to go into damage control tonight and play it smart for 20 laps as it was an extremely difficult track to pass on. We have the points lead now, so I am so excited.”

Reedy also scored the fastest lap of the main event on lap 16 of 20, with a 58.816sec bettering Stewart’s 1:00.015sec laptime. He sure is on his game this year and is determined to defend that crown.

Australian Daniel McCoy (Moto Concepts Honda) almost made the main event in his best ride of the season, finishing fourth in the last chance qualifier. Only the top two transfer to the final from the LCQ, although he’s rapidly improving each week.

McCoy’s countryman Troy Carroll (Cool Air Kawasaki) broke his collarbone in practice during the week, requiring surgery to plate the bone’s break in four places. He expects to be back riding in a few weeks.

Aussie Dan Reardon (Geico Powersports Honda) was sixth on the night, while his teammate Trey Canard had to sit out due to a concussion sustained last week in Phoenix.

The series now moves on to Houston, Texas, this weekend on 24 January. Coma on his way to Dakar victory

Repsol KTM rider Marc Coma has taken out the Dakar Rally, which travelled over 9000 kilometres from 3-18 January throughout the South American continent in Argentina and Chile — the iconic event moving to the location after last year’s race in Africa was cancelled due to terrorist threats.

Spanish star Coma dominated the Rally from the beginning, taking the lead in the opening stage and never relinquishing it before he eventually took victory by a massive 1h25:38sec.

“I can’t describe the feeling — happy doesn’t even come close,” said an elated Coma. “It is so good to be able to draw a line under two difficult years, losing the 2007 Dakar two days from the end and then the cancellation of the 2008 edition.”

Coma reflected on his preparation for the victory, and was thrilled with the result in a race he believes was a success in its new location.

“It has been a difficult rally for both the organisers and the competitors, due to our lack of experience in racing on this continent, but we have all risen to that challenge,” he continued. “What really made this Dakar special were the people of Argentina and Chile who were so welcoming and enthusiastic.”

Second in the race was Cyril Despres (Red Bull KTM), who fought back from problems at the beginning of the event to climb to third, narrowly beating out Yamaha rider David Fretigne. Fretigne was one of only two riders in the top 10 not riding a KTM, making his competitiveness that much more rewarding.

Australian Dave Schwarz (KTM) finished the race in 36th position after running as high as 11th in the early stages.

The final stages of the rally over the weekend were won by Despres (Stage 13) and Helder Rodrigues (Stage 14).

Meanwhile, the Africa Race Rally took up where Dakar left, with BMW G 450 X-mounted rider José Manuel Pellicer winning on a route that closely followed the former Dakar route in Africa, travelling over 7500km to victory.