The Go: Believe the hype!

It’s that time of the year again where the new seasons are just around the corner. Some series have already begun. 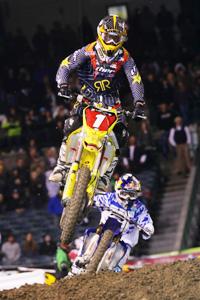 Reed leads Stewart at Anaheim I

This year’s AMA Supercross series had the making to be one of the greatest ever leading into it. Defending champion Chad Reed switched to Rockstar Makita Suzuki over the off-season, declaring his comfort on the fuel-injected RM-Z450 by almost clean sweeping the Australasian Super X Championship (which he used as a test pad for his AMA assault).

It’s that time of the year again where the new seasons are just around the corner, or some series, like the American AMA Supercross Championship, have already begun. The anticipation of a new series is mind boggling as we all wait to see riders and teams in their new liveries, hope for new battles to rise, and sometimes even pray for a new winner to step up to the challenge and knock off the big dogs.

Joining Ricky Carmichael’s former team with the legendary Roger DeCoster and mechanic Mike Gosselaar, the Aussie possibly has the best team in the pits behind him in an effort to capture his third crown.

Come Anaheim’s season opener three weeks ago, the stage was set and Reed or Stewart didn’t disappoint. Stewart took the holeshot before Reedy made his way past after catching from behind, and then proceeded to pull away before Stewart was able to take a second breath and reel him back in to retake the lead.

The unthinkable happened when Stewart missed a gear heading into the whoops, leaving Reed nowhere to go except straight into the back of Stewart’s YZ450F and taking them both to the ground. Reed remounted to take third with no front brakes (they were damaged in the crash), while Stewart failed to restart his bike following an incident with Honda’s Kevin Windham.

This time around a new winner did step up to the challenge, with Supercross class rookie Josh Grant winning his first race for Joe Gibbs Racing Yamaha – also giving the famous NFL coach/NASCAR team owner his first victory since first entering Supercross one year ago.

The second round in Phoenix was another barn-burner that left fans getting very little value out of their money for their seating, because Stewart took the win over Reed by just 0.591 seconds after a thrilling 20 lap main event — the crowd was on their feet for the entire race.

Grant was able to land on the podium again for the second time in as many tries, holding on to the series lead ahead of the more fancied favourites. Heading into Anaheim 2 this weekend, the series is currently wide open.

So with ’09 Supercross so spectacular in its early stages, we can only hope that the MotoGP World Championship (road racing’s pinnacle, much like AMA Supercross is for dirt bikes) will offer the same type of excitement when it kicks off in April under lights at the Losail Circuit in Qatar.

Defending champ Valentino Rossi will remain at Fiat Yamaha alongside last season’s star rookie Jorge Lorenzo, while the Ducati Marlboro Team will feature the first ever team lining up with two former MotoGP World Champions Casey Stoner and Nicky Hayden. Add in the Repsol Honda’s of Dani Pedrosa and Andrea Dovizioso, and it’s quite possible this season could be the best yet.

All eyes will be on Stoner and his blazing quick Desmosedici GP9, with many tipping him to reclaim his title from Rossi now that he has undergone surgery to his troublesome wrist during the off-season. But there’s no way that The Doctor will give in, especially since he has the opportunity the raise his world championship tally to 10 if he can win these last two years of his career with Yamaha (it’s expected he will retire after his contract expires post the 2010 season).

Hayden will be eager to prove he can ride the Ducati, with extra motivation coming from his will to finish ahead of both riders on his former Honda team – Pedrosa and Dovizioso. Let’s not forget the Rizla Suzuki duo of Chris Vermeulen and Loris Capirossi, plus a horde of satellite teams out to upset the applecart.

Bridgestone’s control tyre will be another storyline to keep a close eye on, with all riders giving the newly designed tyres the thumbs up during testing so far.

Comparing Supercross and MotoGP is a difficult thing to do, but considering that both feature two wheels and some of the fittest and most talented athletes in the world, we here at Moto Online can’t wait to see the best in their respective disciplines go head-to-head on every occasion they hit the track this year.

If Qatar’s MotoGP opening round is as action packed as Anaheim’s Supercross season opener, motorcycle fans are in for a massive treat this year. The stage is set for the new year to be the best yet.

Massive hype always surrounds new seasons, but for some reason, I believe we are in for quite a show. Bring it on.