The snow finally cleared enough for Ducati to take the wraps off of its 2009 MotoGP contender, the Desmosedici GP9, today. Stoner and Hayden unveil the GP9

The snow finally cleared enough for Ducati to take the wraps off of its 2009 MotoGP contender, the Desmosedici GP9, today as former world champions Casey Stoner and Nicky Hayden took the opportunity for photos with the all-new carbon-fibre framed racer — a massive change from Ducati’s usual trademark steel trellis chassis.

The livery of the bike is slightly different than in 2008, with the blanked out Marlboro logo visually different along with other minor changes. If one thing’s certain, the bright red definitely stands out in the white snow at the spectacular launch that’s held in conjunction with Ferrari’s F1 team launch.

Hayden also made his debut on the slopes at Wrooom, impressing onlookers as he quickly picked up the sport which he has minimal experience.

Contrary to reports yesterday, it’s now believed that Kawasaki is in fact testing at Eastern Creek with Olivier Jacque on Saturday as originally speculated. The top secret test (that everybody knows about) will be heavily guarded by security, although fans on message boards are already taking bets whether or not Jacque can lap faster than Alex Criville’s 500cc GP lap record from 1996. Surely he will – Aussie Superbikes get near the record these days.

Dorna CEO Carmelo Ezpeleta reportedly made these surprising statements to Gazzetta dello Sport this week regarding MotoGP in 2010. He indicates that spare bikes will be banned next season in hope of forcing teams to run another race rider, claiming that there could be up to 20 bikes on the grid event without Kawasaki!

“Before the start of the season I want the 2010 rules, which I think will increase the field to 20 bikes,” he said. “I’ll be back in Japan to meet the Honda and Yamaha bosses and ask a bigger effort of them. By abolishing the spare bike, we’ll just need each manufacturer to make one bike more than today to have a full grid.” 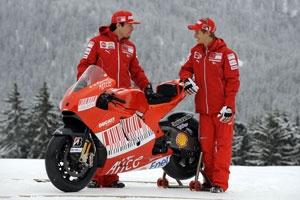 It’s hard to see the factory teams adding another rider to their teams, although anything is possible with the power of Dorna pushing them for changes.

In other disappointing news, word came through today that the Red Bull MotoGP Rookies Cup has been reduced to eight races, and will only feature at six grands prix this year due to the effects of the economy.

That news gets even worse for the Red Bull U.S. Rookies Cup, which has been abandoned completely, leaving a number of highly talented kids and parents looking for last minute career saviours since they’d planned on doing the Cup that travelled with the AMA Superbike tour in 2008.

Final piece of MotoGP news for the day: Jorge Lorenzo will be switching to number 99 for this season, leaving behind his career-long number 48.

World Superbike
In stark contrast to the shrinking MotoGP grid, the Superbike World Championship has attracted record entry numbers for the 2009 season as 32 riders will line up – with seven separate manufacturers poised to do battle! On top of that, World Supersport has 30 entries in what is a booming time for production-based racing.

“I am delighted with the success of the entry list for the 2009 SBK championship, which is the best ever. It is a true demonstration of the success of a formula that allows teams to compete in a high-level series with relatively low costs, and which also gives the possibility to private teams to go well,” said Paolo Flammini, CEO of Infront Motor Sports

“The validity and the stability of the technical regulations have also helped to bring about the entry of two important new manufacturers, Aprilia and BMW, which takes the number of manufacturers present to an all-time record for Superbike. The rider quality will also be very high, with the arrival amongst others of the reigning AMA and BSB champions, as well as a number of talented new riders. In a moment of global economic difficulty Superbike can look to the future with serenity and optimism.”

Here is the official entry list for the SBK class, which features four Australians, as well as a host of new additions from British Superbikes and AMA Superbike Champion Ben Spies. This season’s destined to be one of the best on record.

Australian Superbike
This press release from Motorcycling Australia just in – it now seems the controversial testing rule has now been suspended:

Changes to the 2009 ASBK Supp Regs

After more than a week of consultation between Motorcycling Australia’s (MA) Road Race Commission, MA and International Entertainment Group (IEG) Pty Ltd, it has been decided to suspend Item 49 of the 2009 ASBK Supplementary Regulations relating to testing restrictions.

The original intent of item 49 was to reduce costs for all competitors, both factory and privateer riders alike, and was not aimed at restricting competitors taking part in other events in any way.

The issue of testing restrictions for 2010 will be discussed by the MA Road Race Commission with industry stakeholders and competitors during 2009.

This change and further operational amendments will be posted on the MA and ASBK websites as they become available.

Supplementary Regulations and entry forms for the 2009 Australian Superbike Championship are available on the MA website www.ma.org.au/2009asbksr.

American Motocross
A milestone has been made in the USA today, with WMA Women’s Motocross National Champion Ashley Fiolek confirmed to be joining the factory Honda Red Bull Racing Team this season – earning herself a factory ride to be the first female in America to do so. What’s even greater is that the talented 18-year-old is actually deaf, making her incredible achievements in motocross even more amazing. Well done, Ashley, and good luck this season from the team at Moto Online.

Dakar Rally
Today’s 12th stage of the Dakar Rally in South America went to Cyril Despres ahead of overall leader Marc Coma as the race winds down to its final stages. In a stage that was shortened once again, Despres was able to move up to second overall, knocking Davide Fretigne back to third on his Yamaha. Aussie Dave Schwarz dropped to 41st overall after placing 61st during today’s stage. There’s just three stages to go in the Rally.