The AMA Superbike Championship will have just three tests this season, with big fines for those who break the rules. 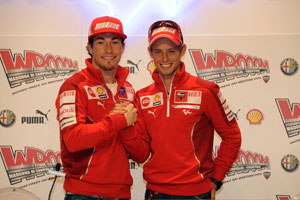 Hayden and Stoner at Wrooom

Ducati’s annual Wrooom press meeting at Madonna di Campiglio featured an introduction for the Ducati Marlboro Team of former world champions Casey Stoner and Nicky Hayden, with the pair already working in harmony in what seems like one of the closest knit teams on the grid.

Hayden was his usual gracious self, extremely excited about debuting in Ducati’s bright red colours and anxious to continue his learning curve on the powerful Desmosedici GP9.

“On Sunday I tried on my Ducati leathers for the first time in an official photo session and I felt very proud,” said the popular American star. “I know what a huge opportunity I’ve been given and I’m very grateful to Ducati, Marlboro and everybody who has shown faith in me in this new chapter of my career.

“I was immediately struck by the dedication and passion that the team is famous for and by how hard everybody is trying to make me feel comfortable in these new surroundings, as they have done helping me adapt to the bike and get the most out of it. So far everything has gone really well.”

When speaking of the Ducati and the little time he has spent on the bike at last year’s post-season tests at Valencia and Jerez, Nicky acknowledged that the bike’s a winner, although he’s not fooled by how difficult it will be to make the most of it like Casey does.

“Obviously I need to get faster in order to be truly competitive but I already love the bike. I can’t say it’s easy to ride, it gets pretty loose on corner exit sometimes but the engine is powerful and that is important, especially in a race situation,” Hayden continued. “The chassis is nice and stiff so you get plenty of feedback and I like the feeling with the front, which is really stable in the fast corners. So far we have only had two test sessions at Valencia and Jerez, which are tight and twisty tracks, and I think that at places like Malaysia and Qatar it will be even better.”

The Kentucky Kid is clearly relishing the opportunity to work alongside the determined Stoner, enjoying their early relationship after a rocky few years alongside Dani Pedrosa at Honda.

“I’m happy to be working with Casey –- we’ve known each other for a few years now, you could say we’ve got similar backgrounds having not come up through European competition and having started out racing in dirt-track,” he said. “We’re both competitive and we’re going to want to beat one another but we’ll also work together to make a strong team. As far as my expectations for the season are concerned, I still have a lot of faith in myself and in what I’m capable of. The first objective is to get back to the same level I was at in 2006, challenging consistently for the podium and trying to start winning races again.”

Stoner was also in a good mood at the Hotel Spinale ski resort, giving an update on the condition of his left wrist following surgery following the season finale at Valencia last year.

“I’m reasonably happy. I would like to have a little more movement but the check-up went well yesterday, the bone graft has healed well and that is very positive,” said the Aussie. “It means I can start to work my hand and arm a little harder now and start to recover some muscle mass and get in the best possible shape for the next test.”

Stoner looks forward to getting more time under his belt on the carbon-fibre framed GP9 – a bike he hopes will take him to his second world title and knock Valentino Rossi off of the pedestal.

“So far I’ve only ridden the GP9 twice, at Barcelona during the season and for a day at Valencia in November. It wasn’t much but it was enough to understand that we’re not a long way off and that the new chassis is an improvement,” he enthused. “We need to work on improving the set-up and refining a couple of areas on the bike. Last year we were perhaps a little too confident and overlooked some of the work we needed to do, leading to a few highs and lows at the start of the season that end up costing us dear.”

Casey also shares the same feeling toward his new teammate, with the pairing destined to be one of the strongest line ups on the grid this season.

“I’m really happy with the addition of Nicky to the team. He has always been kind to me, even when I was racing in the smaller classes, and I think we can work well together,” Stoner continued. “The communication between us is great and I think we can work together on fixing certain situations and getting the most out of the GP9 so that we can both be competitive.”

He also vowed to be more aggressive this season, although didn’t mention the titanic battle between him and Rossi at Laguna Seca.

“From my side I also plan to be a little more aggressive this season and maybe be a bit more decisive in races where nobody seems to want to take the initiative,” he concluded.

I believe Stoner will be difficult to beat this year, although you can never count out Rossi. Nicky will also be one to watch if he can regain the form he had in 2006 on the 990cc RC211V. This season is lining up to be one of the best yet for MotoGP at the front, even if there are only 17 bikes on the grid if there’s not a rescue plan put in place to save the Kawasakis.

An interesting topic came up at Wrooom regarding electronics in MotoGP, and considering Hayden has just joined the team with what’s believed to have the best electronics package on the grid, it was nice to hear him state that he’d like them reduced.

“I think the electronics in the last couple of years have grown so much that if it keeps up at this speed, in a couple more years, it’s just going to be ridiculous. Somewhere, you need to draw the line on it, but it’s technology—you can’t stop the world from progressing,” said Nicky. “I think Dorna and everybody have quite a big challenge there, to understand how to police it with all the bikes, but I think one thing in the future it’s going to have to be looked at.”

In one of the most surprising news stories to surface this week, British MCN is reporting that Kawasaki is set to test the 2009 model ZX-RR at Eastern Creek this weekend before moving on to Phillip Island next week. It’s unknown who their sources are, but we also know that the new Yamaha YZF-R1 production bike is being launched at Eastern Creek this week and next, so maybe one of their testers saw the Kawasaki at the venue. Kawasaki test pilot Olivier Jacque is said to be the rider doing the testing.

Further word on what may be changed in the MotoGP series to reduce costs for this year may be shorter practice and qualifying sessions for the weekend –- a crucial change that will assist the teams in maybe being able to use the same engine for two race weekends instead of what they’re using at the moment.

At the moment the teams can get about 600 to 700 kilometres out of one engine, although they’re going to have to stretch this if the increased engine life rules are implemented. 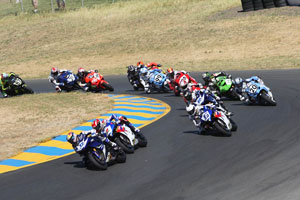 AMA Superbike will test less in 2009

The AMA Superbike Championship will have just three tests this season, with restrictions placed and a $US10,000.00 fine (plus a one year probation) for any violators of the rules.

An official press release regarding the matter stated:

Each of the three official test days will be held at respective tracks in the East, West and Midwest and represent the only opportunities competitors will have to test at AMA Pro sanctioned tracks this year.

As of February 15, 2009, private testing will no longer be permitted at tracks that are hosting an AMA Pro Road Racing event this year. Thursday at-event promoter test days have also been eliminated.

Each test will be operated and sanctioned by AMA Pro and will offer competitors technical inspection, timing and scoring and air fence. Entrants will be responsible for track rental costs, tires and fuel. McCoy is looking to make a main event

The third round of AMA Supercross will be run this Saturday night, with the series heading to Anaheim 2 in California – the venue of the season opener a few weeks ago. Stewart won last weekend, but now it’s Reed’s turn to open his victory account for the season, which would be his first for the season.

I also spoke to Daniel McCoy this week and he is expecting to be back this weekend after being forced out with cuts to his hand after a heat race collision with Travis Preston last week in Phoenix. McCoy will be fighting to make the main event for the first time in his US career, as will visiting Aussie Troy Carroll on his Cool Air Kawasaki.

Unfortunate news from today’s stage has been that Spanish rider Cristobal Guerrero had an accident and is in a coma. He was airlifted to hospital, where a CT scan will be completed.

Other news to come out of the day was that Stage 11 has been cancelled due to weather. Aussie contender Dave Schwarz (KTM) lies in 21st position still, after finishing the 10th stage in 30th.